The Amazing Jellyfish from the Year 12000

Jared Gallardo and crew help spread a message from the future: “Human be nice to other human; human protect nice planet; human go on get funky.” 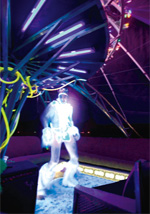 Jellyfish have gotten a bad rap. This will come as no surprise to anyone who has been stung by one. Names like “Portuguese man o’ war” strike fear into the hearts of many. But out of the high desert of Salt Lake City comes a jellyfish with a mission. Jared Gallardo, inspired by a vision and the tech-heavy art of the Burning Man festival, brought The Amazing Jellyfish from the Year 12000 to life.

Jellyfish have gotten a bad rap. This will come as no surprise to anyone who has been stung by one. Names like “Portuguese man o’ war” strike fear into the hearts of many. But out of the high desert of Salt Lake City comes a jellyfish with a mission. Jared Gallardo, inspired by a vision and the tech-heavy art of the Burning Man festival, brought The Amazing Jellyfish from the Year 12000 to life.

Jellyfish 12000, as it is also known, is a hyper-intelligent visitor from the future who has left its water-bound relatives behind to promote peace within the human race. It differs from the rest of its Cnidaria phylum in many ways: the hydrostatic skeleton has been replaced with a steel frame consisting of thousands of pounds of welded steel. It is over 12 feet tall, 18 feet long, and 15 feet wide, overshadowing today’s largest jellyfish of around eight feet in diameter. The jellyfish has also evolved a brain of two computers and one microcontroller with a nerve net of 617 circuit boards and 650 feet of Ethernet cable, which control nearly 5,000 LED lights on its dome-shaped body. Its nervous system allows Jellyfish 12000 to detect sounds or input via a touchscreen, and to display animations that react in realtime on this complex, home-built lighting system. It’s not only the concert-ready sound system that has been making noise in the Salt Lake valley; Jellyfish 12000 has also created a tight-knit community of followers and friends who applaud and aim to live by the Jellyfish’s message, spoken in a robotic monotone:

Gallardo conceived of Jellyfish 12000 as an art car for Burning Man and for months worked unassisted, but the project soon attracted an army of volunteers from many areas of expertise. Over 80 people have worked on the project over the past two years, all devoted to making something unique and unforgettable. Among the instrumental team members are Jeremy Carver, who designed the electronics and much of the software code; Kelly Peterson, who developed the core animation software; Nick Schmansky, who developed the audio-reactive code; and Alice Bain, who coordinated numerous project teams.

“This group has come together to help bring this whimsical vision into the world, but just as importantly, to forge friendships, to be supported in their creativity, and, simply, to have fun,” says Gallardo. “It’s really given me and many of us a true sense of community.”

Though you would not notice at first glance, this unique sculpture is built on top of the chassis of a stripped-down one-ton van. The lower level can hold up to 17 people while the Jellyfish is in motion. An upper level, inside the eight-foot animated dome, can carry another six. This is prime seating, for while the animations can be seen from far away, they can also be seen inside-out from within the dome. Though Jelly rarely exceeds 10 miles per hour, there’s something deeply delightful about the experience of riding a huge, interactive work of art such as this.

No longer just an art car, Gallardo now refers to Jelly as a “mobile interactive art installation.” It has received national and international attention. The Burning Man organization recently awarded the group with a prestigious grant, and the Discovery Channel Canada has come to Salt Lake City to film it for two different programs.

Living in a westside Salt Lake warehouse, Jellyfish 12000 continues to evolve. A challenge facing the Jellyfish now is that it is currently stuck in the fossil fuel life phase. To continue its advancement, it needs to replace its internal combustion engine with an electric power source.

To that end, Jelly is saving its dollars earned from appearances at events around town-often for groups eager to help spread its message; sometimes just for gatherings of people who like blinky lights and fun music. Usually both.

The Amazing Jellyfish from the Year 12000 is a heat-seeking nocturnal creature, so keep your eyes open this summer and perhaps on some hot summer night, you’ll be lucky enough to have your own memorable encounter with this magical beast.

Scott Nelson is a student at the University of Utah. This is his first article for CATALYST.

The Jellyfish can be coaxed to appear at festivals and parties, which will also help fund its transition from gas-powered to electric. Contact Jared Gallardo, 323-497-2060 (Jared@Jellyfish12000.com)

Also, view an Ignite! presentation on the Jellyfish: Begin your search at www.IgniteSaltLake.com.