The Alchemical Kitchen: Pick a pickle

This past month, the Alchemical Kitchen has been freezing, drying, pickling, canning, and fermenting. It’s really not as busy and time consuming as it may sound. Before I ever preserved my own foods, I imagined it entailed many a wise grandmother holed up for days in her country kitchen.

The Alchemical Kitchen, however, exists somewhere between the lineage of country practices and the ideals of the urban homesteader. Even though food preservation historically was done with generations of family members coming together to harvest, prepare and preserve their own produce, most times I stumble by myself through old canning books to preserve some of the extra goodies from my farm share or the farmers’ market each week. By summer’s end I have an entire cupboard and freezer full of local goodies. Mine is a personal practice, country-inspired with its content and simplicity, but fueled by the urban myth that all things should be convenient.

From the very beginning, my foodie journey has looked nothing like the country kitchen. It’s been more of a born in the city-explored country-now somewhere in between type of personal evolution. I grew up in downtown Pittsburgh with parents who were taught that food should be pre-made, fast and cheap. Instead of fall Sundays full of harvesting and preserving, my parents, siblings and I were dressed head-to-toe in Steeler gear, waving our Terrible Towels, and cheering for our favorite players. The only canned food present was some type of cheese-like substance to dip our chips into. 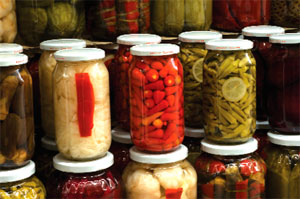 In college I ate more pizza and drank more wine from a box then I care to remember. But the stress of graduate school forced me to take a look at my health and how I was living my life. The more I learned, the more I understood that my diet was the first and most important factor in my own well-being. It was a no-brainer: I needed to switch from processed foods to fresh organic whole foods.

For a year or so, organic whole foods were my focus, and I did feel better-more energy, no colds, and a happy digestive system. However, my diet was forced into a new dimension after graduate school, when I committed to three summers of backcountry work in the Olympic National Park in Washington. I led at-risk youth into the mountains for 10 to 20 days at a time. My trail leader insisted I find local sources of food for our trips and teach lessons on how the health of the environment is intimately linked to the health of every being on Earth.

During my weekends off I would wander around Pike’s Place Market and purchase foods from the water and farms surrounding the peninsula to pack into the backcountry. I fumbled around the make-shift camp kitchen, allowing myself to play and mess up. The more I played, the more I learned how to make meals that were actually tasty and filling.

I realized that I couldn’t consider myself an environmentalist (or even just someone who hopes for a greener future) if I didn’t look at what I was eating and how it impacted the communities and environments in which I lived. I had officially become a locavore.

But once the autumn came, my local eating attempts vanished and I was back to organic whole foods and paying for their packaging, processing and shipping. I was supporting my own health with organic foods once again, but not the health of my community or of the Earth. I quickly recognized that to truly be a locavore, I had to become a food preservationist; so it was time to play again-this time with culturing, canning, pickling, freezing and drying my own foods.

Preserving my own food has taught me that balance is worth striving for, and knowledge really is power. So I research the history and science behind preservation traditions but also allow myself to play with the color, taste and textures of foods, hoping to juxtapose all that is good between the traditions of the past with the information of the present. My hope is that you allow yourself to play with these pickling recipes and join me here next month for some canning. Whether you’re in the city or the mountains, you can’t get much more local then your own kitchen.

For basic pickling and canning you will need: glass jars; lids and bands; boiling water canner or a large pot with a lid to process jars; jar lifter; jar funnel; plastic spatula for removing air bubbles; and a lid wand.

Molds, yeast, and bacteria are the major culprits of food spoilage. Many foods contain natural acids that fight off bacteria, but not the mold and yeast. Brines and vinegars create more acid to further preserve the food. Heating packed jars to 212° F in a hot water bath will destroy mold and yeast. Processing jars of pickles in hot water will allow them to be kept in the cupboard at peak condition for a year.

Before placing vegetables in jars to pickle, make sure to sanitize glass jars and lids with warm soapy water. It’s also wise to keep the jars warm before filling them with boiling water and hot produce.

All of the recipes that follow can also be “quick pickles,” meaning if you don’t process them in boiling water they will keep in your refrigerator for a couple of weeks-great for barbeques and parties.

Rebecca is a nutritionist and owner of Park City Holistic Health. For more healthy DIY recipes visit her at www.parkcityholistichealth.com and www.playfulnoshings.blogspot.com