Tattoos for bees: Making a point, one tatt at a time

Let most seven-year-olds loose in Utah’s Natural History Museum and they’re bound to gravitate toward the giant dinosaur fossils of the Past Worlds exhibit or the dazzling colors and textures of Gems and Minerals. For Wyatt Conner-Ohlinger it was the mesmerizing circular upper gallery of the museum, the Native Voices gallery depicting Native American art and culture, which most grabbed his attention.

“‘This one’s really important. Everybody needs to see this,’” Wyatt’s uncle remembers him saying as he carefully read over the labels of every piece.

From a young age, Wyatt has exhibited empathy and compassion for the social and environmental issues going on around him. So, when he, now 14, approached his tattoo artist uncle, JJ Ohlinger, with a proposal to host a fundraiser to help save Utah’s bees, JJ really wasn’t taken by surprise.

In January Wyatt was assigned a school project for science class to write a report on an animal facing extinction, detailing the significance of the animal, what could be done to prevent extinction and what he personally could do to help conservation efforts.

Rather than create a simple poster or PowerPoint presentation as most students were likely planning to do, Wyatt wanted to make real change now. His uncle JJ’s tattoo shop, Prohibition Ink in Sugar House, would tattoo bee designs on clients and donate all proceeds so long as Wyatt organized the entire event.

Wyatt drew up some of the designs, picked Utah Beekeepers’ Association to receive the proceeds and assembled giftbags for clients with local honey donated from a beekeeping neighbor in Sandy, home-baked honey-inspired desserts and a write-up of his project. 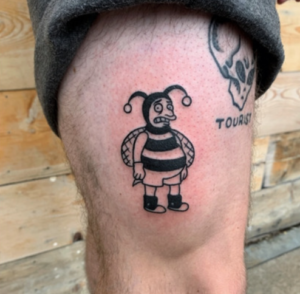 Because of the Covid-19 pandemic, the originally scheduled March event date was moved twice before appointments were made safely under local guidelines. Despite the interruption, appointment slots sold out in two days. Twenty-one people committed their bodies to bee art for a cause and the shop raised $1,760. 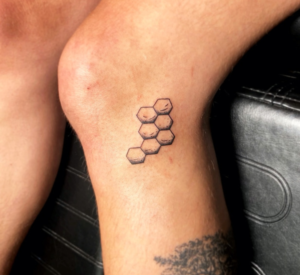 “Wyatt was going into this thinking we might be able to raise a few hundred bucks, so it was really cool to see his surprise when so many people showed up,” JJ says proudly.

Though school closed down before Wyatt had the chance to present to his class and teacher, he says it never really was just about the assignment.

“People need to realize that bees are a really important part of our lives. Most of our food comes from pollination and without bees, we won’t have that,” he says.

Wyatt hopes his project will spread awareness of the importance of bees, and also help promote ways to protect them. He says one of the most important things he’s learned in his research is how detrimental pest control is for bee populations.

“Even if the package says it’s bee-friendly, it can still have harmful residue that the bees take back to their hives and it will kill off, like, their larvae.”

In recognition of his generosity, the Utah Beekeepers’ Association invited Wyatt to speak at their last convention.

“I think they were a little confused at this 14-year-old kid telling them he was going to get a bunch of people to get tattoos to raise money,” JJ recalls.

But, JJ says, it is projects like this from young, conscious-minded individuals that help inspire change.

“We have all of this weirdness going on in the world right now. If  a few more people put some of their efforts into important causes big or small, it still makes a difference. [Wyatt] made an impact because he put forth the effort. More of us need to recognize the little steps that lead to huge strides.”

Wyatt considers his project a big success and is looking for new ways to change the world as he enters his first year of high school.

Wyatt still owes his uncle a bee tattoo—the first tattoo he’ll have ever given and the final condition of their agreement. 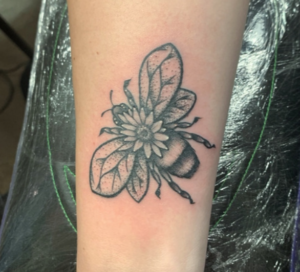 This article was originally published on August 2, 2020.