Will Allen is a family man: he believes that unity, honesty, and love are invaluable virtues to the family unit; honesty being the most important. So, when Allen found out that his “father” had been lying to his sisters and hurting his brothers, he left, and made a documentary about his family life. Will’s family just so happens to be a cult. Yes—Waco, Jonestown, and a rather more famous “family”—a cult.

Holy Hell, at this year’s Sundance Film Festival, chronicles the day to day activities, the highs and lows, the secrets and lies of the Buddhafield family. In the mid ’80s, Allen, fresh out of film school, begins a journey of self-discovery and enlightenment; hoping, praying to find meaning and purpose where it had thus far alluded him. His journey leads him to a charismatic and aesthetically charming group of young individuals who seem to have it all: direction, hope, and faith in something bigger than themselves. Allen is, of course, enamored by this cosmic openness and hopes that this group can help him find an inner peace. Buddhafield, under the guidance of their enigmatic leader Michel, travel into the fourth dimension and beyond, finding the utopia they had all dreamed of; that is until Michel’s greed, ego, and fantasies become worth more than his disciples’ safety and sanity.

For all intents and purposes this is your run of the mill cult documentary—think those History Channel Manson features sandwiched between hour-long meditations on Hitler or aliens—even the story arc is the same: the first few years are filled with peace and happiness, things slowly begin to turn for the worst, and sure enough, after a decade or two, the group is imploding due to every kind of imaginable abuse. In one respect though, I suppose it is different; beautifully, terrifyingly different: the film contains no news or stock footage, no impartial narrator crooning over the events, no obviously religious spin, but instead the film is solely comprised of family-vacation style footage and raw interviews with (former) members of the Buddhafield family. This perspective and access is unlike anything I have seen before—it is entirely biased yet unable to be so; it cannot help but present the story as it naturally unfolded, with all the emotion, bitterness, and former joy therein. 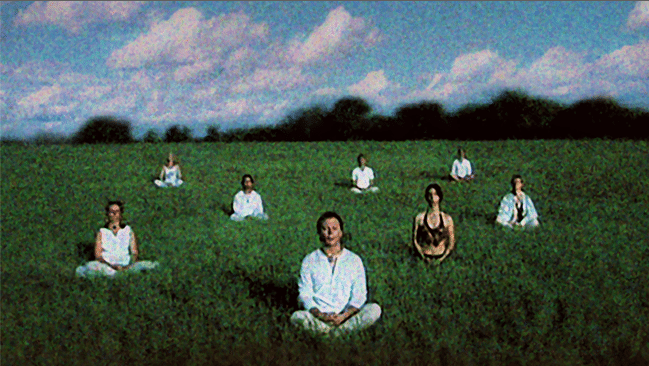 Courtesy of Sundance InstituteThe cinematography presents a pleasant mixture between the clean-cut and well-lit technological aesthetic of today, and the grainy camcorder shots of the ’80s and ’90s; there is also a needed juxtaposition between the common family-vacation shots, that give the audience something to grasp on and connect to, and the scenes of god-like grandeur, that make one want to slowly back out of the theatre. The soundtrack provides an ambient and emotionally-charged undercurrent for the scenes on the screen—joyous when need be, startling and questioning in turn.

Holy Hell’s greatest flaw is that of its tonal wonder for the individuals and events, seemingly unaware that the audience has, even from the first ten minutes, plotted all possible eventualities. I believe that Holy Hell is not a movie made for the common audience—you, me, and our couch-dwelling dogs and cats—but for the individuals still under the control of Michel and his Buddhafield cult. To the present-day member, this documentary would act as an unparalleled exposé, taking all they know as “holy” and sullying it in well-documented facts and experiences. Holy Hell easily has the power to bring about justice and change for followers and former followers of Michel, if only the community will let it.

In witnessing so many of Allen’s brothers and sisters come forward to share their stories, pains, hopes, and fears; I was struck by the level of family commitment these individuals still hold for one another. Ultimately Holy Hell is not simply a story about the dark side of cult-life, but a story about family; family in the most intrinsic sense—unity, honesty and love—and maybe that is something worth going through hell to find.

This article was originally published on February 2, 2016.