One part hearty bong rip, one part immaculate conception, one part government conspiracy, and a heavy dose of gore: here you have the recipe for director/screenwriter Danny Perez’s new feature film, Antibirth, which premiered at this year’s Sundance Film Festival. 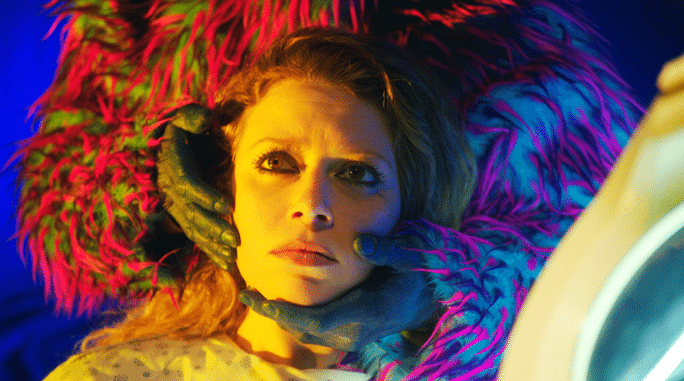 Courtesy of Sundance InstituteThe film begins with a real bender of a party—I’m talking drinks, drugs, sex, grinding, dancing, and a killer sonic experience—where our protagonist, Lou (Natasha Lyonne), is having the time of her life—I mean, don’t stop till you drop right?—until she is guided out into the night by some suspicious bald crony (Maxwell McCabe-Lokos). Lou wakes up hung over—really hung over—and feels something squirming in her womb, probably just something she ate; her friend Sadie (Chloë Sevigny) says its nothing to worry about; her new psychic accomplice, Lorna (Meg Telly), claims it’s an extraterrestrial government experiment; and her drug dealer Gabriel (Mark Webber) just says she’s always f*cked up. Lou is a little too high or too drunk to care either way, but her body is changing, drastically changing: her feet have goo-filled boils, her neck skin is peeling off, her stomach is huge and growing, and she is most certainly losing grip with reality; every pregnancy is different. Lou sets out to solve the mystery of her impressively grotesque pregnancy, and never quite recovers from what she finds.

This is a movie for those who enjoy film, horror, and how ridiculous their mixture can, at times, be; which isn’t to say this is a poor film. In fact, it succeeds in a way many horror movies fail to: by being fun. The cinematography in this film is expertly planned in every scene, color, movement, and angle; and especially in color. On screen there is a stark contrast between the bland, desolate, snow covered landscape that Lou and her friends inhabit, and the incredibly vivid, color-filled, world in Lou’s dreams/nightmares and on her TV—this ultimately creates a mystic wonder that many horror movies have stepped away from; realism is overrated, give me the gore and the nightmares, I need both. Musically, on one hand we have a mindfully rock driven soundtrack to accompany any and all party scenes, and on the other we have a visceral, wubbing, synth-centric sonic-scape to add worry and suspense when needed. The acting was neither loathsome nor especially praiseworthy; each line was effective and convincing enough that even the most questioningly raised eyebrows were smoothed back into place. Though, without ruining too much for you—you the omnivorous film lover—I will say that the ending is the hardest part to buy; here the plot gets a little too thick for my tastes.

Antibirth is fun and engaging. It pulls ideas from every possible direction—variously spotting a little Rob Zombie, Gerard Way’s Lola, and a whole lot of Fear and Loathing in Las Vegas—, ultimately it is able to exist as a surreal and compelling work; and if not a critic favorite, it will, without a doubt, garner a significant cult following.

This article was originally published on February 2, 2016.