The jury is in for the Sundance Film Festival 2015 award winners: “Me Earl and the Dying Girl” (U.S. Dramatic), “The Wolfpack” (U.S. Documentary), “Slow West” (World Dramatic), and the “The Russian Woodpecker” (World Documentary).

But what about all the other well-crafted films that also rightfully earned a spot in the festival? Let’s talk about those.

If you want an empowering documentary film with chart-topping music… 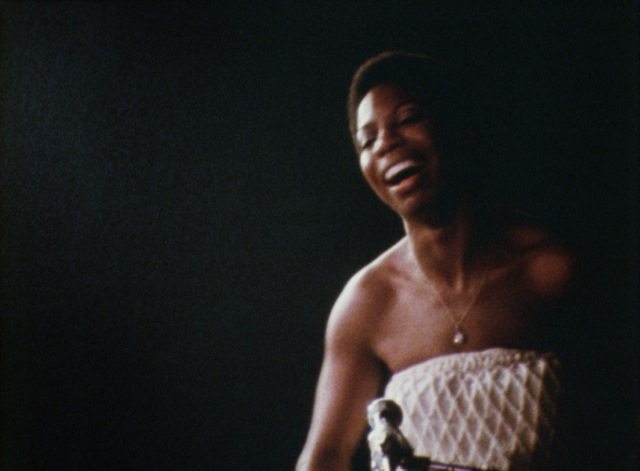 Nina Simone, classically trained pianist and coveted voice of the ’60s, has a story worth digging up. It’s a story of racism, stardom, musical brilliance, the Civil Rights Movement ~ and the anger and violence that spilled out of the movement. Simone, a champion of Black Power, admittedly (to MLK himself) “not non-violent,” sacrificed her sanity for the emotion and passion that poured out of her music for her beliefs and her anger over the discrimination she suffered. Liz Garbus carefully revives her story through the ups and downs of the isolated life of a star through archival footage of her performances and the Civil Rights Movement, as well as many interviews, including her daughter and ex-husband. Meanwhile a powerful soundtrack flows through Nina’s hits over the years.

After the screening on Thursday, January 22, at the Eccles Theater, Garbus was asked, “Why Nina Simone? Why now?” Garbus referred to the racial violence building over the past six months and pondered if only we had Nina’s voice now to express the times. Sigh. Don’t we all. Good news, this is a Netflix film, but you can’t watch it yet (correction to the orginal article). ‘Coming soon’ to your Netflix account.

If you want a worldly true story set in the ’80s that will make you laugh, dance and cry…

Director Benson Lee’s true story of his wild experience at a Korean government-sponsored summer camp for high schoolers from around the world (Germany, Mexico, the U.S. and the UK) and of Korean descent to help them connect with their heritage. A summer of partying, teenage love, unlikely friendships and raging hormones is not all happy-skippy, despite the rocking ’80s soundtrack and wardrobe. Lee’s homage to John Hughes films also touches on harsh realities of Korean culture: adoption across cultures, suicide, societal pressures and racism.

This is a must-see film, yet it only got funding from China (the Chinese love Korean-pop culture, says Lee). It needs more crowd-sourced support in order for the general public to see it. Watch the teaser online at http://seoulsearchingmovie.tumblr.com/teaser and support the film by liking “Seoul Searching Movie” on Facebook and Twitter.

If you are looking for the next funny, brainless, adult, animated series to get hooked on… 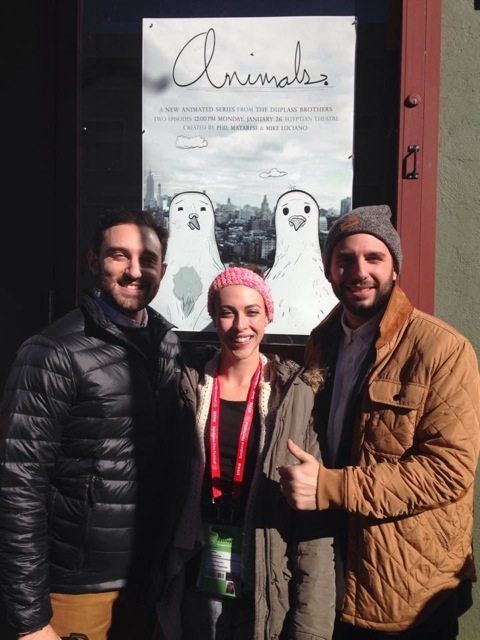 Mike and Phil with Sophie

An independent (charmingly) animated TV series about the downtrodden animals living in New York City. Who knew party-going sewer rats, transient bedbugs and family-feuding pigeons had so much in common with the city’s human residents? Phil Matarese and Mike Luciano’s hilarious creation was made possible with the help of executive producers Mark and Jay Duplass of the Duplass Brothers Prods. (HBO Togetherness) and financed by private equity, meaning they are making one the first independent TV series. From the nerdy, sneaker-wearing, computer camp-going, pre-teen pigeon to the money-grubbing DJ Lab Rat (an albino lab rat with an ear growing on its back), Matarese and Luciano’s characters are both endearing and hysterical.

After the screening at their Sundance premier of two of the episodes on Monday, January 25, Mark Duplass reminisced Skyping with Matarese and Luciano who were hiding out in the supply closet at their day jobs to take meetings with him. Thank goodness Matarese and Luciano quit their day jobs. Now with the help of the Duplass brothers, they have created 10 episodes to make the first season of “Animals.” Both wrote, voiced and directed the series, while Matarese animated, and Luciano edited the audio. Voice-overs include Mark Duplass, Aziz Ansari, Nick Kroll, among others. We sure hope they get picked up soon. However, you can follow them online for the time being. For an example of their work, go here: http://animalswebseries.com

This article was originally published on February 6, 2015.