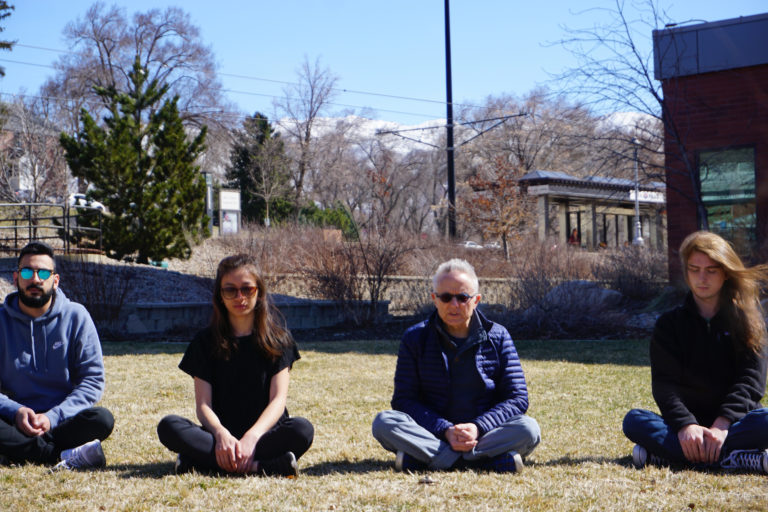 On a chilly February afternoon, a crew of workmen yelled and their tools clanged at a worksite on the campus of the University of Utah. Heavy equipment beeped and roared. A saw screeched through concrete, or maybe metal. Meanwhile, in a classroom next door to the raucous construction, on the other side of a row of frosted windows, a group of students sat in a circle of chairs with their hands in their laps, eyes closed. “Move from doing to being,” Phillip Bimstein told them in soft tones.

Bimstein continued to guide the students through a meditation session. He told them, “Breathe.” He asked them to feel into their bodies and release any tension they may find there. “Start at the top of your head,” he said. “Release,” he said. Something outside crashed to the ground. A worker hollered. “Notice your tongue,” Bimstein said. “What feeling is there in your tongue?” He moved their focus down through their necks and shoulders, down to their abdomens, and down from there. “What about your, your backsi… What about your bum? How are you sitting? How does the chair feel?”

The students didn’t say a word. They sat. They breathed. They felt what they were feeling.

“Let go of everything,” Bimstein said. “Every sound. Every thought. Every sense. For one minute: Just be.”

It was then that I noticed something: it was actually quiet. Inside the classroom, it was. Outside, the construction workers were still making all kinds of noise. But inside: That’s where the quiet was. The quiet was inside.

With his class “Radical Quiet,” a University of Utah honors college course, Bimstein is asking a group of curious young Millennial students—overachieving, stressed out, teched-out kids—to think deeply about the value and practice of silence. Mindfulness. In a world of constant noise and activity, they are learning slow and attentive living.

Bimstein, 71, is a Chicago native and former mayor of Springdale, Utah, “Gateway to Zion National Park.” He is also a composer, a daily meditator, and the former frontman of the New Wave band Phil ‘n the Blanks. He owns three cats and a new vanity license plate that reads “Meowist.” He has led similar mindfulness courses through the years—“Kindness,” “Opening the Mind’s Eye”—in an effort to help young people challenge the clamor of modernity.

Bimstein thinks of his classes as compositions 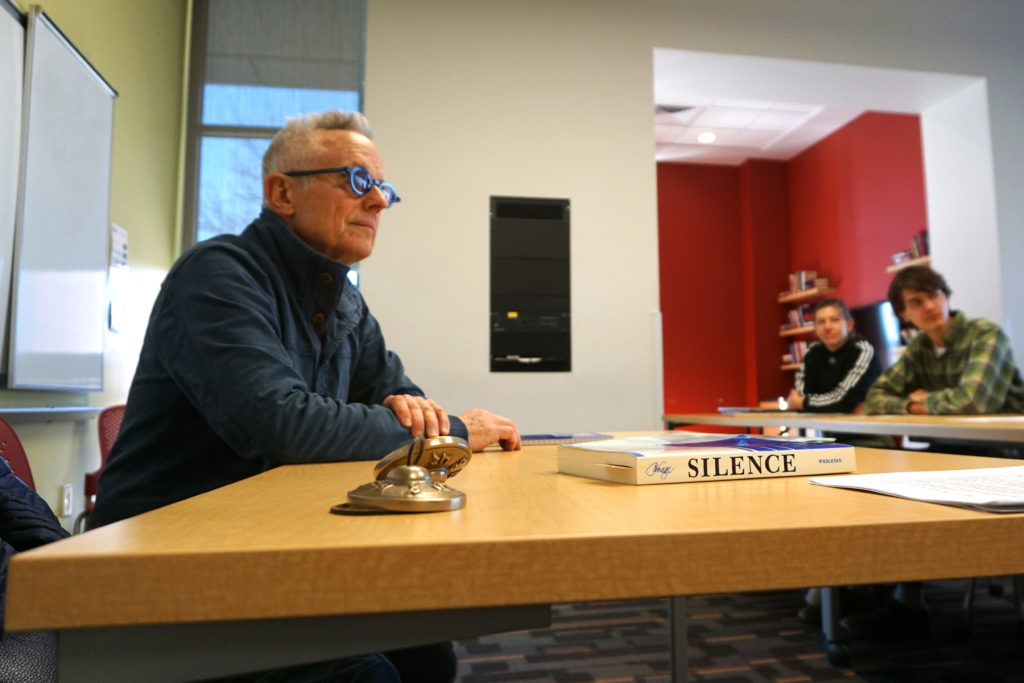 every bit as intricate as, say, his “Brahma Viharas” symphony, a 2015 musical meditation on Buddhist and Yogic virtues written for English horn and full orchestra. For “Radical Quiet,” he has enlisted a host of local artists, including experimental rock outfit Hoofless, radical clarinetist Katie Porter, and his longtime partner, yoga instructor Charlotte Bell. Together, they and the students are mining the empty space that, like the universe’s invisible dark matter, makes up so much of life when you actually know where to look for it and how.

On a day that I visited his class, Bimstein was dressed in cerulean blue from head to foot, and, from beneath a shock of short white hair, rimmed by the beach-glass blue frames of his eyeglasses, his blue eyes shone brightly. Blue, however—that is to say morose, dour—is something that Bimstein is decidedly not. He burns with enthusiasm and vitality. Before class, he scrambled on hands and knees over a plateau of tables that were clustered together, to find a chair. Few of his students were able to match his youthful enthusiasm when he welcomed them each by name as they entered the classroom. When one student greeted him with “Good afternoon,” Bimstein responded, “It’s always morning for me. I prefer to think in terms of the morning.” He then told the student about his practice, upon waking, of saluting the four cardinal directions and greeting the sun, whether or not it has risen. “I like the sound of that,” the student replied with a smile. “Very mindful.” 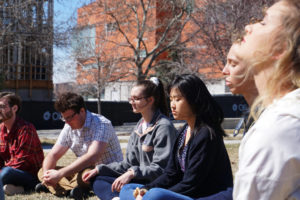 The space between space

When the time came to break the silence of meditation, the peel of Bimstein’s Tibetan hand chimes sang through the room like a bright light, and the students slowly reawakened.

Opening discussion, Bimstein reviewed the previously assigned homework: a podcast episode about the silence in the “off” beat that grounds the rhythms of the beating heart, of poetry, and the rising and falling of breath. One student, Mark Draper, said the podcast had made him more aware of the spaces between his own actions. “I feel this compulsion to move from one step to the next all the time,” he said. “When I was making eggs for dinner the other night, I sensed the impulse when I turned the stove on, when I took the eggs from the fridge, and when I cracked them into the pan. Then I relaxed for 30 seconds into silence and I watched the impulse recede. That was really cool.”

Bimstein called on another student, Nicole Jermak. “As I’ve been telling people about this amazing course and what I’m learning in it, my friends keep asking me to teach them how to meditate,” she said. “I’m also learning the value of every silent, empty moment in my day.”

“The world isn’t built for silence,” another student added.

Bimstein then challenged the class to consider the “luxury of silence.” “It’s something—and I think we have a responsibility to acknowledge this—that some people of lesser means may not have the freedom to enjoy. Nevertheless, silence is available. Noise does not have the final word,” he said.

At the students’ willing, the conversation turned to the power of silence to confront existential problems. One student talked about holding space in herself for both grief and gladness after recently losing a loved one. Another student said that he suffers from clinical anxiety. A number of heads nodded in understanding. He seemed to have struck a nerve. “I’ve learned to be present with my anxiety in silence,” he said. “Just me and this anxious beast alone, together. He doesn’t scare me anymore.”

Bimstein said—seemingly not for the first time—that he is a college teacher, and not a licensed therapist. “But that being said, I’ll remind you,” he continued, “This course is about you. About you discovering your own ways to silence and quiet and their place in your lives.” He looked around the circle of students, eye to eye. “Be quiet. Have your doubts. You don’t have to overcome them. In fact, it can actually be courageous not to,” he said. 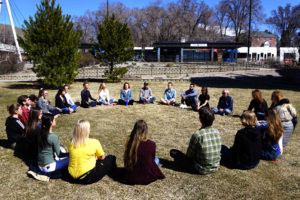 An hour passed. When class broke for a 10-minute break, Bimstein stepped out to find the day’s guest presenter, modern dancer Allison Shir, who would lead the students in an exercise in mindful movement. During the interim, some students pulled out their phones—they’re forbidden during class—while others stood around talking. One female student confessed to another, “When I was in middle school, I never thought college would be anything like this.”

Benjamin Bombard is a producer of RadioWest on KUER, a freelance writer, and an unrepentant peregrinator. He’s been meaning to meditate for decades