In the early phases of the COVID-19 pandemic in late March, we were asked to stay at home and venture outside only to meet essential needs. We canceled plans, worked from home, drove less and itched, every day, to get outside. Parks and trails became more and more crowded as community members flocked to open spaces.

In the Salt Lake City Transportation Department, a discussion on recreation quickly broke out: Under these guidelines, was outdoor exercise considered essential? How could the department help residents under stay-at-home orders engage in outside recreation safely?

The city transportation department realized that people needed access to open spaces closer to their homes, but neighborhood sidewalks did not provide the space and ease needed for distanced outdoor exercise.

“Most of the city’s sidewalks are only four to five feet wide. If you’re trying to maintain six feet of social distancing, you really can’t walk past somebody on a sidewalk and maintain that,” says Dan Bergenthal, transportation engineer and Stay Safe, Stay Active project manager.

After studying initiatives from other cities around the country, Salt Lake City decided to invest in a temporary measure to open certain streets for community recreation while maintaining access to local traffic only. They would call the initiative “Stay Safe, Stay Active Streets.”

In April, the department conducted a week-long survey asking for resident input on which streets and which portions of streets they would prefer to have opened—“We like to say ‘open’ rather than ‘closed’ because we didn’t close the streets but opened them up to bicycle and pedestrian traffic,” says Bergenthal. 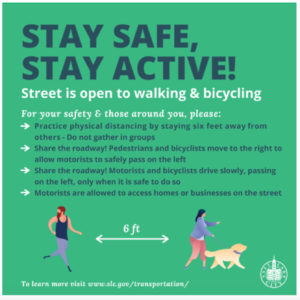 Of course, residents did not get to select from every single street in the city; the options were based on a map constructed with streets that were determined to have good walkability potential, to make sense for the community vision of the neighborhood and to contribute to equitable access.

While 66% of comments supported or were neutral about the initiative, some of the pushback was strong. Bergenthal says there are almost always very strong positive and negative reactions to any city transportation change.

“Please do not do this,” one respondent wrote. “You are taking away any comfort people have in their own neighborhoods to get out. These are already over-attended areas!”

Another opponent wrote, “On 4th Ave. between K and L [streets], it is already a big block party. Kids from multiple families play together, ride their bikes in the streets, swing on the swings hanging from trees and adults have happy hour together. In many ways this street is mimicking what you are recommending….I no longer walk on 4th Avenue because I find that I am more at risk of encountering people who are not paying attention to social distancing requirements.”

“It was essentially an experiment,” says Bergenthal. “We didn’t know what exactly was going to happen when we did this. We didn’t think that we were going to get massive crowds just showing up the street or anything, but we couldn’t know for sure.” 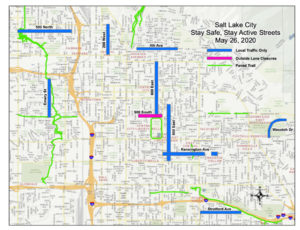 The team ultimately decided to try it, knowing they could easily shut the operation down if it got out of control. On April 23, they began by opening 500 North from Redwood Road to 800 West. Since then, nine other city streets have opened plus the outside lane on 900 South. No serious issues have materialized, Bergenthal says; people generally get along with sharing these spaces.

Some have complained that the initiative is not necessary because people haven’t been utilizing the program. However, data collection  shows that is not accurate. In the most recent survey, for example, 800 East experienced 108 bicyclists and 23 pedestrians over a two-hour period.

“Different streets have different personalities. But on some streets, we have people asking us to leave this for as long as we can.”

“For those who haven’t experienced it yet, the street is technically closed to through traffic, but anyone who lives there can of course still drive to their homes. The only difference is that now people are allowed to walk/run/cycle in the middle of the street and cars have to share the space (which planners often tend to see as safer because it forces cars to travel more slowly and drivers to be more aware…). The result of this situation is really kind of remarkable as it opens up the space for kids to play, neighbors to chat, etc. This evening someone was doing a music performance in their front yard, someone else had a corn hole game going in the street, teens were playing catch.… It’s unlike any other space we previously had in the Avenues.” 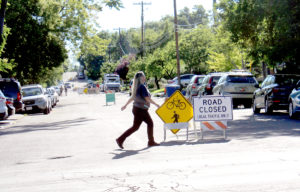 Options for the future

The Stay Safe, Stay Active Streets initiative runs out of funding at the end of June and, slowly, the streets will reopen to vehicles only. Some community members have suggested it become at least a permanent thing in the summer, perhaps alternating among different streets every few weeks or some other variation.

Berganthal says the project was intended to be temporary but thinks it’s a possibility, if neighbors are willing and funding can be found.

Either way, he says the initiative has been important for building support for other similar projects. For example, his department is working on a multi-use trail along 900 South, several neighborhood byways in the Poplar Grove area and general improvements at major intersections to enable pedestrians greater access to walking spaces.

“We’re hoping that people will look back on this and say, ‘Oh, okay, we understand what you’re trying to do here—to use our roads for more than just cars—and we’ve seen that yes, that is possible, it does work.’”

This article was originally published on July 1, 2020.