Spreading Seeds of Peace, One Uke at a Time

What is it about a ukulele? This four-stringed flyweight relation of the guitar has got to be a top contender for “friendliest instrument.” Accessible, engaging, and utterly cute, the uke can never take itself too seriously. If you could turn a giggle into a musical instrument, it would look like a ukulele. Enthusiasm for the ukulele seems almost universal.

Portuguese sailors during the age of empires traveled around the world carrying a small stringed instrument called the “machete”—a word meaning “little sledgehammer.” Everywhere they stopped, they left a musical legacy. In Venezuela, this instrument became the cuatro. In Colombia, it is known as the tiple. In Bolivia, a version made with the shell of an armadillo is known as the charango. In Hawaii, most famously, it became the ukulele.

“In the United States, there are two worlds of the ukulele,” says Hardin Davis of Acoustic Music, Utah’s premiere ukulele dealer. “There’s the islander world, and you know Salt Lake Valley has a lot of islanders from Hawaii, Samoa, Tonga and so forth. They pronounce the word ‘ookoolaylee.’ Then there’s the mainland Tin Pan Alley, 1920s and ’30s kind of tradition, and it’s pronounced ‘youkoolaylee,’ so you can always tell where someone’s coming from by how they pronounce it. The popularity is great though, especially among the kids. High school football teams in the valley will be sitting in a hallway waiting for the bus, and half of them have ukes and they’re all singing!” 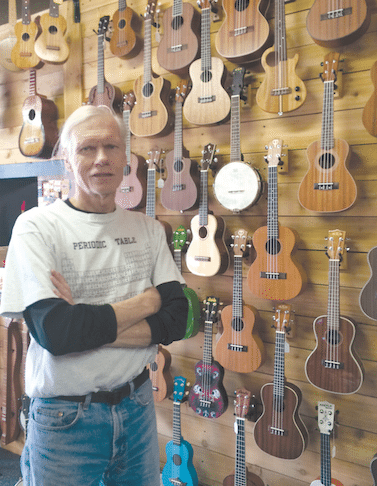 So, is there a precedent for this recent explosion in the uke population? “100 years ago was the first big boom in uke playing, right at the beginning of Vaudeville,” Hardin tells me. “There was another boom in the ’50s, and one in the ’60s, and then nothing till about 2000 when ukuleles took off like crazy. It’s the easiest of the fretted stringed instruments to play, and it’s the ‘gateway drug’ for guitar.”

“Before this, we used to sell maybe one or two ukes a month,” Hardin continues. “Now we can sell one or two a day!” Classes and jam sessions for the uke are ubiquitous; the University of Utah’s Lifelong Learning department ran beginning ukulele lessons this fall, ukulele camps for kids are held all over the place every summer, and the Salt Lake City Public Library has been holding a Ukulele Social Hour on the second Wednesday of every month. Tommy Hamby, Adult Services Coordinator at the library, informs us that the library system even has a stable of 20 ukes available for withdrawal. “I call them ‘circu-leles’,” he says. “We’ve had them for a few months and they are circulating like gangbusters! We started with one at each location, but there were so many holds we now have three at each location, and 75 people on the hold list.”

The instrument holds an allegedly nefarious history in the Salt Lake City ordinances. According to legend, in the early 20th century a hot ukulele player took the town by storm, causing women to swoon in his presence, and in an effort to keep the peace, the City Council passed a law against carrying an “unwrapped ukulele” on the streets of Salt Lake. Truth or rumor? All we know for sure is that no such law exists today.

Utah plays host to ukulele festivals each summer in Logan, American Fork and St. George. American Fork also boasts the Ukulele Youth Choir, for kids aged 10-18. Several enthusiastic Utah ukulele groups can be found on Face­book. So if you are interested in the ukulele, you are in good company!

The Utah Ukulele Association hosts monthly jam sessions with a “beginner’s hour.” In 2009, Steve Butler founded the association after seeing ukulele groups starting up in other cities. “We started meeting in libraries once a month. Attendance was slow at first, but we just stuck with it, hosting the jam session rain or shine.” The jam has now become a well-attended staple. “You can play all styles of music from classical to punk on a uke,” Steve says.

Robin Alexandra, a local artist, recently took up the ukulele. “I’ve always wanted to play an instrument, so when I turned 50 this year I bought myself one. I travel with it, and I make friends with it, and I love it!” Lala West, a fashion designer, says “I’m loving my uke. I wake up an hour earlier every morning so I have time to practice.” J. Wilford Neville, a Black Rock City ranger, encapsulates the intrigue of the ukulele succinctly: “I’m committed to playing badly but enthusiastically, and it’s unbeatable fun. They’re so easy to play.” Indeed, an old high school friend of mine, Nicole Friedenberg, sent me a picture of her three-year-old son, Zeke, strumming a ukulele. “He’s making up his own songs while strumming the uke, and he sings at the top of his lungs.” 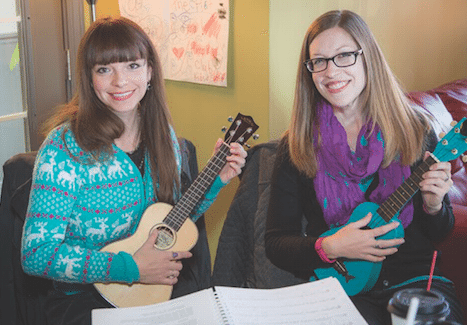 There is no age limit to the ukulele. If you can hold it, you can play it, and it’s the therapy dog of the stringed instrument world. Bolo Mikiela Rodrigues, a Hawaiian musician, has a father who’s suffering from dementia. He’s kept his dad engaged in life by making videos of the two of them singing and playing their ukes. They have a family tradition of the ukulele; Bolo’s grandfather actually used to make the instruments, and even as his mind is coming apart, Bolo’s dad can still strum along. My own father also had dementia —it’s such a terrible disease, and the worst part of it is losing meaningful communication with your loved one. The ukulele bridges this gulf, and Bolo’s videos with his dad are pure magic.

The ukulele is happy and silly and calming, and it’s an instrument of social outreach; wielding a uke makes you approachable, and when we approach each other, we are spreading the seeds of peace. Songwriter Amanda Palmer sings a paean to it in her masterpiece, “Ukul­ele Anthem,” in which she asserts that the ukulele could, in fact, save the world:

Just limit yourself to three chords

And do not practice daily

With a piece of wood and plastic

You can play the ukulele too, it is painfully simple

Ukulele save the people

Ukulele gleaming golden from the top of every steeple 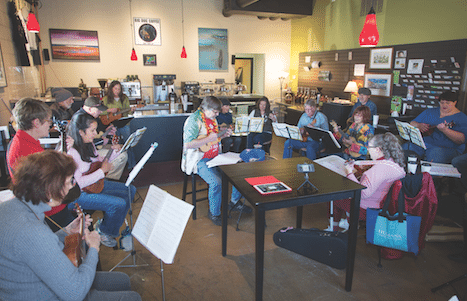 This article was originally published on December 2, 2015.