Devil’s Dung. Not exactly the most flattering description for something that is eaten with such relish in parts of the world. Stinking Gum? Not much better. Food of the Gods. Ah, now that’s more like it. My finger runs down the definition in the guide. Asafoetida i.e. Ferula assafoetida, family Apiaceae, it says, is a species of Ferula native to Iran. It is a herbaceous perennial plant growing to two metres in height, with stout, hollow, somewhat succulent stems—the plant taxonomy continues at length. Dazed, I firmly shut the book, raise my head and sniff.

An exciting pungent aroma wafts through from the kitchen. It tickles my nostrils and I take a deeper breath, marveling at how the English and the Indians can use exactly the same ingredients and yet come up with a distinctly different taste in their respective dishes.

It is the Asafoetida, of course. There is something about this herb that turns the plainest pabulum into a delectable pleasure to the palate. Its power lies in the fact that just a few grains blended in at the right time can turn a culinary catastrophe into a gastronomic delight by adding a touch of the exotic and uncommon.

My first acquaintance with this herb was at mother’s knee. I was three and had a rollicking tummy ache that made a joke of a marching band doing a 30-gun salute. My insides felt like a rugby playfield during the last few frenzied minutes of an exciting match. When all manner of comic faces by Dad failed to distract me from the pain, Mum gently applied a moist cotton bud to my navel and asked me to lie down ramrod-straight on the bed. A heady smell drifted up from my belly button and within a few minutes the perpetrator, namely too much gas, was fleeing from my body with much song and fanfare.

Unknown to myself, I was by then already consuming this wonder of nature in my meals. Mum obviously used it generously in all possible curries and soups. No doubt that contributed to my lifelong partiality to eating food. But it took a sudden and utterly unaccountable interest in cooking during my teenage years to actually bring the herb to the forefront of my consciousness and enthusiasm. 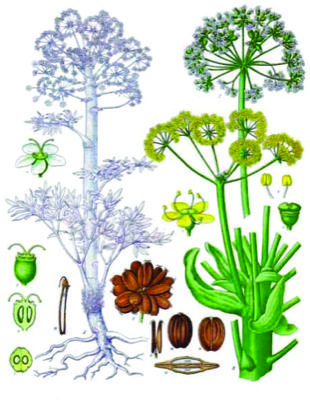 Called hing (pronounced heeing) in Hindi, the powder of the asafoetida is one of the first ingredients to go into the cooking pot after oil. As soon as the oil is hot enough, a pinch of hing is sprinkled in. It immediately sizzles, turns a deep brown and discharges the fragrance that is the hallmark of all dishes Indian. Following this, cumin seeds (jeera) enhance the scent as well as the flavour and the main vegetable is then added to this concoction, along with red chilli powder (laal mirch), turmeric powder (haldi) and salt (namak) to taste. Voila! Bon appétit.

Having read that in ancient times, asafoetida was considered to improve singers’ voices, I was eager to sample whether this spicy morsel of news was indeed true and so went about the house after lunch hollering at the top of my lungs. Lamentably, my husband, a king among men but unable to appreciate the finer nuances of music, immediately forbade me to ever carry anything other than a tray, much less a tune. I have therefore never gotten around to ascertaining if this tidbit is fact or fiction.

In addition to being a potent antidote for flatulence, in India Asafoetida is prescribed by Ayurvedic doctors for respiratory conditions like asthma, bronchitis and whooping cough. It is even said to cure hysteria.

Although it is generally recommended for use in minute quantities, at times I find myself getting greedy and adding a couple of heaping teaspoonfuls. This doesn’t take away from anything, save for depleting my own reserves of the herb.

Asafoetida was earlier almost impossible to come by in England. However, most general supermarkets now stock it in plenty owing to their growing Asian clientele. Ostensibly the herb should be stored in airtight containers to avoid contaminating other spices with its strong odor. However, it is my belief that this has less to do with contamination and more to do with preservation. Most herbs and spices lose their fragrance over time. Common sense therefore dictates that they should not be exposed to the air.

Known to attract wolves (I wonder how they found that one out), catfish and pikes; and to deter germs, addictions and chefs, asafoetida is gradually making its appearance in more and more multicultural cuisine and being recognised for its many medicinal as well as epicurean qualities.

As the plant continues to tease the olfactory senses of the world, I’d better get back to rehearsing my do re mi’ s. I have a point to prove. u

Devyani Borade is a Brit currently living, cooking and writing in Germany. We enjoy her blog, “Verbolatry.”

When you go looking for this culinary spice, don’t call it asafoetida. Ask for hing. Found locally in many Indian and Pakistani markets, it is understandably known by its Hindi name – asafoetida is the English name derived from asa or aza, a Farsi word meaning “resin,” and foetidus, a Latin word meaning “smelling.”

Derived from the sap of the perennial herb Ferula, it’s often found kitchen-ready in a compounded powder form. Before it hits the pan, the smell of hing can make a cook think twice about adding it to a dish, but chefs liken the spice to using soy sauce. It’s the kind of flavor that unites and harmonizes other elements in a dish. Once it’s cooked, the smell mellows into something more reminiscent of leeks.

Hing complements most Indian-style dishes. Consider using it in dal curry or with vegetable ingredients like potatoes, onions, cauliflower and peas. Add it to hot oil or ghee. Let it cook for about 15 seconds prior to adding any other spices or aromatics. It pairs well with cumin, mustard seeds, curry leaves and ginger.

Tomato Hing Gravy, from SeriousEats.com (adapted from a recipe from ManjulasKitchen.com). Often served with potatoes and cauliflower.

Ingredients:
3 tomatoes or one 15-oz can
½ piece of ginger, peeled and roughly chopped
1 jalapeno, roughly chopped and seeded
2 tbs oil
1 or 2 pinches of hing
2 tsp cumin seeds
1 tbs flour
1 tbs coriander, toasted and ground
¼ to 1 c milk/cream/coconut milk (added incrementally to taste)
sugar to taste, if you like

Blend tomatoes, ginger and jalapeno until smooth.
In a high-sided pan, heat oil to med-high. You’ll know the oil’s hot enough when a cumin seed crackles instantly.
Add hing and, after a few seconds, the cumin. When the crackling dies down, add flour and stir until thickened.
Pour in tomato puree and stir in coriander. Turn heat to low.
Pour in about a cup of water and let it cook down for a few minutes. Add salt and sugar to taste.
Add milk/coconut milk a little at a time until you’re happy with the texture and flavor. Toss in some fresh cilantro.