Spaceship Earth: A new film to inspire the power of small groups to reimagine our world

You may remember the story—in 1991, in Oracle, Arizona, about an hour north of Tucson, eight people sealed themselves inside “Biosphere 2,” a glass-enclosed space built to mimic Earth’s biome. Their mission over the course of two years was to explore the possibilities of how humans could survive in a closed system.

The enterprise, funded by a Texas oil billionaire, was motivated by the potential in licensing technologies for building future human colonies on Mars.

The project as a whole was driven by a group of counter cultural idealists who saw it as an opportunity for research and to inspire better stewardship for our own planet. 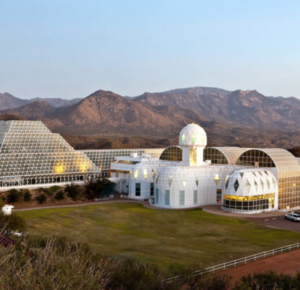 Constructed from 1987 to 1991, Biosphere 2 covered 3.14 acres (less than one third the area of a Salt Lake City block). Inside was a mini Earth, complete with a desert, ocean, rain forest, plains and the plants and animals to go with it. The team grew their own food, recycled everything, and carefully monitored each little ecosystem down to the smallest scale. When they harvested a sweet potato, they could see the little uptick in carbon in their atmosphere.

While the team of Biospherians documented their mission, the majority of what the public saw around the experiment was from TV news media. Media coverage at the time largely framed the event as a spectacular failure, or a fraud, and often pointed to cult accusations around the group that had launched the $200 million project. Critics said there was a lack of credible science backing, and often referred to it as “trendy ecological entertainment.”

On the surface, the series of bite-size news reports from the Biosphere 2 project present a cautionary tale from a simplified perspective.

The longer, more nuanced story is about the group of imaginative individuals who had traveled the world and made the seemingly impossible possible, long before Biosphere 2 was conceived of. This story was never told, until now.

In an internet search around two years ago, director Matt Wolf came upon a photo of what he initially thought was a still from a science fiction film—a group of eight people in Star Trek-evoking attire, standing in front of a giant glass pyramid.

Wolf zoomed out 25 years to the story behind these people and the pyramid and gave it a new life.

“I was looking for the story that was bigger than Biosphere 2, at a group who literally re-imagined a world. They were catalyzed by an early awareness of climate change. This project was really discounted and taken over largely because of political and economic forces,” Wolf told us in January at the film’s Sundance premiere.

“As a filmmaker I’m always looking for stories that are ripe for reappraisal, and this is certainly one of them, given our current environmental crisis,” says Wolf.

In a time when nearly every Earthling has been spending a little extra quiet time, and wondering what the future will look like after COVID-19 reveals all the societal, financial and ecological cracks in Biosphere 1, Spaceship Earth tells the story about a small group of individuals who had not just been reimagining our planet for decades —they had done a lot about it.

The group met in San Francisco in the 1960s. They had wanted to do something in theatre, business, art, and science, so they decided to do it all. They called themselves the Synergists.

Inspired by the likes of Stewart Brand’s Whole Earth Catalog, William S. Burroughs’ Naked Lunch and Rene Daumal’s Mount Analogue, they set out to build a sustainable ranch in New Mexico in 1969 and kept going from there.

“The moments of all possibilities last a very short time, and that’s why you act,” says original member Kathelin Gray in the film.

The charismatic leader of the group, John Allen—Oklahoma-born, former military, Harvard MBA graduate, theatrical figure—attracted characters from all over: architects, social workers, theatre buffs, the list goes on—emboldened by the idea that the power of a group is greater than the sum of its parts.

The name Spaceship Earth is a nod to Buckminster Fuller, the originator of the geodesic dome and author of Operating Manual for Spaceship Earth, a short book published in 1969 in which he talks about planet Earth flying around the universe, with a finite amount of resources that cannot be resupplied.

In the years leading up to the undertaking of Biosphere 2, the group had kept upping their challenges. They built a boat in which they traveled the world, started an art gallery in London, built a hotel in Kathmandu and held ecological think tanks, all the while touring as a theatre company called the Theatre of All Possibilities.

“I see both the possibilities of ambitions, and also the limitations of it. That is part of the parable of Biosphere 2. Failure is part of the equation, too, and you can learn things from that: It’s more important to take risks than to operate in a safe space where you’re guaranteed to have success,” says Wolf.

Swept up in their world of “all possibilities” and meanwhile searching for where they went wrong, Wolf unravels a story of ambition, long-term impact versus the curse of short-term economic investment pressures and human foibles, and the power of small groups. Wolf dusts off the story that was largely discarded from public memory and re-examines the question posed by Biospherians: If this small group can use their collective skills and experience and cooperatively manage their impact, why can’t we?

Sophie Silverstone is a CATALYST staff writer and director of Community Outreach.

The documentary re-telling, full of archival footage and recent interviews with the group behind Biosphere 2, can be rented through Utah Film Center here. Spaceship Earth is also now available on Hulu, Amazon Prime, Google Play and YouTube.

This article was originally published on June 1, 2020.