Sonita is a brave young Afghani refugee in Iran (now a resident of Utah) and the subject of the film Sonita, by Iranian filmmaker Rokhsareh Ghaem Maghami, showing this week at the Sundance Film Festival.
—by Katherine Pioli

A slight girl, her smooth black hair half revealed by a slipping head scarf, holds a spoon to her lips like a microphone and stands above a crowd of school girls as she belts out a rap in Farsi that they gleefully chant back to her. Fortune cards! Buy your fortune from me! My future is bright. Don’t worry about me. The girl is Sonita (pronounced with the accent on the “a”) Alizadeh, a brave young Afghani refugee in Iran (now a resident of Utah) and the subject of the film Sonita, by Iranian filmmaker Rokhsareh Ghaem Maghami, showing this week at the Sundance Film Festival. 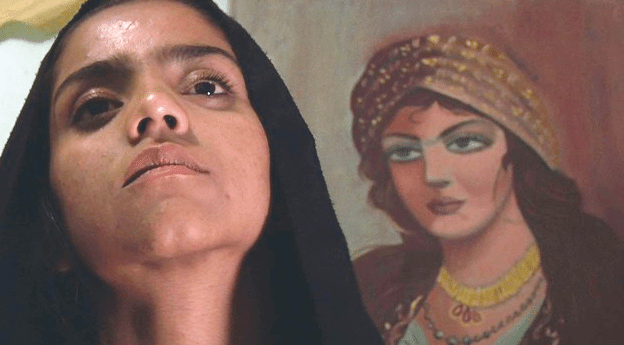 Sonita’s narrative, as told by Maghami, is surprisingly and refreshingly hopeful considering the multiple challenges she faces as a young woman in a conservative culture, a political refugee and an aspiring rap artist. When we meet her, Sonita is fifteen years old and a student at a non-profit school for refugees in Tehran. After classes, she cleans the schoolrooms and toilets for extra money to help her brother and sister-in-law pay rent. When she’s at home, she plays her guitar and pastes magazine pictures of far away places into the notebook where she keeps her song lyrics.

Sonita, we learn through the film, is still traumatized by her early childhood in Afghanistan and by her dangerous flight from the country at the young age of eight. In a classroom exercise, when the young refugees are asked to re-enact a scene from their lives, Sonita positions the other children into a terrifying still frame from the day that her family fled Afghanistan. In the scene, two girls sitting on steps in the room and holding each other close represent Sonita and her mother. On the floor, two boys cower beneath two others who hold their hands as guns – the Taliban holding her father and brother at gunpoint.

If filmmaker Rokhsareh Maghami had been trying to make a film about refugees and women as disadvantaged members of her country’s society, she likely could have followed any number of young refugees in Tehran – according to the United Nations High Commissioner for Refugees, Iran has the second largest population of Afghan refugees, nearly 1 million in 2014 – but that’s clearly not Maghami’s purpose. Despite her traumatic past and the difficulties of her situation in Tehran, including no legal documentation of her birth or of her immigration to the country, Sonita’s story is defiantly self-empowering and we watch mesmerized as she pushes against the will of her family, and even the conventions and laws of the country she lives in, to become Afganistan’s most famous female rapper.

“I didn’t listen to my family because they said don’t go to school, and I went. They said, don’t practice music. But, I followed my dreams,” Sonita told me last week during a phone conversation from her new home and school, Wasatch Academy in central Utah.

Sonita’s raps are what first brought her to Maghami’s attention. “She found me through my website,” recalls Sonita. “A friend told her, there’s this girl at the school who needs help to record songs. She doesn’t have money.”

Intrigued, Maghami’s visit turned into a promise to help the girl find a record producer and as they continued to spend time together, Maghami turned her own camera on Sonita and began capturing the story of the young woman who wanted to rap.

But even Rokhsareh couldn’t always help. “In Iran,” Sonita explains to me, “it’s illegal for a woman to sing.”

In interview after interview, Sonita and her band mate Ahmad get turned away by recording studios when Sonita tells them that she wants to record a solo piece. “You don’t have permission from the government to record and you want a female solo track. I just can’t do this for you,” one man tells them, though it’s clear that Sonita’s solo track is the real deal killer.

When they finally get a yes, the two young people look like they’ve been handed the world until they hear the price. For a single track record without government permission the price is $1,000 USD. But Sonita does not give up and it’s this fighting spirit that serves her well when the reappearance of her mother, who travels by bus from Afghanistan to Tehran, to see her daughter for the first time in three years, brings news that upends Sonita’s life and throws Maghami’s film into an entirely different direction. Fifteen year-old Sonita is to be married.

“I was not surprised when it was my turn,” says Sonita, whose two sisters were married off before her. “I thought, the next one will be me. And then my mom came.”

According to the Council on Foreign Relations, Afghanistan, where the legal marrying age for females is 16, has a child marriage rate of 40 percent. The normalcy of such marriages becomes apparent in the film when Sonita gathers with a bunch of her girlfriends at their school and the conversation turns to marriage. One girl, who is the second wife of a man much older than her, talks about the money she’s saving to buy a “divorce.” Another girl giggles self-consciously as she talks about the man that she will be married to. How much will he pay, the other girls ask. “Three thousand,” she says. “Or twelve thousand with a dowry.”

“It’s very common in my country and others,” Sonita explains to me. “My friend talking about her price, she’s younger than me. She felt she had to say yes. Girls don’t think there’s any other way.”

But Sonita is different, that much is clear even before we hear of her bride price and it’s this determined independence that makes her so captivating to watch on screen. In a poignant scene at the start of the film, while Sonita and Ahmad are traveling in the back of a sedan on their way to meet with a recording studio producer to pitch her songs, Sonita coaches her shy band mate, Ahmad, on how to deliver the lines, not hesitating to interrupt him whenever she hears something she doesn’t like. When I mention the scene to Sonita tells me honestly, “Ahmad was a good poet but not a very good rapper.”

Through Maghami’s lense, and scenes like this, Sonita’s bold personality comes through clearly, but, when the announcement comes that she will be married for $9,000, a sum urgently needed so that her brother back in Afghanistan can afford his own bride, it’s not immediately clear that she can over come the situation. After all, it’s not just her mother and father she’s up against, it’s culture and tradition – her own mother, we learn, was long before married to a man from her village she had called “uncle” because of his age. “It is the way we do things,” says one man in the film. “Traditions will remain.”

For the first time, Maghami shows us a girl who is lost and confused. Sonita sits crouched and helpless in the apartment listening to her mother and sister-in-law discuss the bride price. In another scene, wedged into the corner of her apartment like a trapped animal, she faces the camera and says to the filmmaker, “You can buy me.”

The statement turns the film and Sonita’s life on its head. The real matter, after all, is not marriage or tradition, but money and poverty. Against the advice of others (“You as a filmmaker should not get involved, Step back and look at the bigger issue,” Maghami’s sound man says to her.) the filmmaker begins to turn the camera on herself as she steps in fully to help her young subject avoid the fate that her schoolmates cannot.

In the end, Maghami pays Sonita’s mother $2,000, buying Sonita six months of freedom, and the two launch into work on a music video for Sonita’s rap “Brides for Sale.” The video, which went viral and earned 8,365 clicks on YouTube in two weeks (it’s since been viewed more than 330,000 times), won Sonita the award for Best Female Artist and Best Overall Performer from the French Institute of Afghanistan. But the biggest changes were set in motion when the video reached the attention of the Strongheart Group, a US-based educational program that works with young people in war zones and refugee camps. Through this connection, Maghami helped Sonita procure the student visa that, one year ago, helped her immigrate to the United States with a full-ride scholarship to study at the Wasatch Academy.

“If you believe your dreams you will do everything to reach them,” says Sonita who continues to write, record and perform her music but also now dreams of studying law and returning to her country as an attorney to work for women’s rights. “I believe there is a good life. It’s not always staying at home and cooking and raising children. Now I have the best life but I want to help. I am working hard for my friends.”

Sonita is grateful for the opportunities she’s received through people like Rokhsareh Maghami, those at the Strongheart Group and the Wasatch Academy. But she’s also very proud that, back in Afghanistan, she and her message against child marriage have not been forgotten. “One of my sisters told me, one day we were walking down a street and we heard your song on a car stereo. That’s a good thing to hear. In Afghanistan they listen to my songs and care about those things.”

This article was originally published on January 25, 2016.