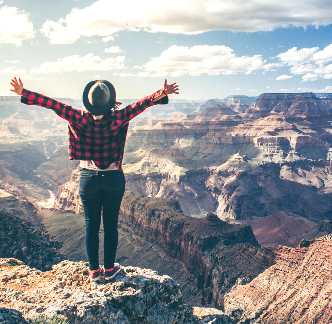 The Great American Outdoors Act (GAOA), signed into law on August 4, is something big to celebrate! This landmark legislation achieves two major conservation goals: it provides badly needed funds to tackle a burgeoning National Parks maintenance backlog, and it guarantees $900 million per year for the Land and Water Conservation Fund (LWCF), used to purchase new public lands for recreation and conservation.

Even though national park visitation keeps on increasing, congressional allocations have not kept pace. The Park Service currently has nearly $12 billion in deferred maintenance on roads, parking lots, buildings, utility systems and other facilities.

Utah’s “Mighty Five” parks alone have an estimated $207 million in maintenance needs, and that’s not even counting other parks and monuments like Dinosaur, Golden Spike, Hovenweep, Natural Bridges or Timpanogos Cave.

LWCF funds can be used to purchase open space, but they also come in handy to resolve public lands access conflicts. For instance, in 2019 LWCF provided funds to keep the Zion Narrows trail open to the public where it crossed private property.

Citizen groups nationwide have been lobbying hard for this bill, but despite strong bi-partisan support in Congress, Ben McAdams (D-UT-4) was the sole member of the Utah delegation to vote yes. Rob Bishop (R-UT-1) not only voted no on GAOA, he tried to eliminate LWCF altogether.

As chair of the House Natural Resources Committee, Bishop allowed LWCF to sunset for the disingenuous reason that “growing maintenance backlogs and existing management barriers at BLM and across all federal management agencies must be addressed before we even consider giving the federal government more land.” (Never mind that Congress has just demonstrated how to fix those problems).

Ironically, Bishop’s attack on LWCF may have ultimately helped to save it by raising public awareness.

In his signing statement, President Trump ignored his administration’s history of “downsizing” national monuments and took credit for other people’s work. Bizarrely, Trump cited his 2017 destruction of Utah’s Bears Ears National Monument as a conservation victory, declaring, “When you add all of this to what we did in Utah, if you remember that —that was a year and a half ago —but we did Bears Ears National Monument. When you add all of this to Bears Ears, I would say— and it got my attention when Steve and a whole group came up to my office. When you —actually, both of you came up with a group, and you said this would be bigger than Theodore Roosevelt.”

Foxes in the hen house (so to speak)

More than 300 citizen groups signed a strongly worded letter telling the U.S. Senate that they have a “moral duty” to reject president Trump’s nomination of William “Perry” Pendley to head the Bureau of Land Management (BLM).

The letter documents Pendley’s inflammatory rhetoric opposing social justice and diversity, as well as his,“radical anti-conservation positions, a deeply held belief antithetical to the agency’s mission that public lands should be privatized, virtually unprecedented conflicts of interest and ethical issues, a history of supporting anti-government extremists, and a track record of dismantling the very agency he is tasked with managing.” Pendley has been the acting director of BLM since July, 2019.

Last month, Trump withdrew Pendley’s nomination in order to avoid a hearing, but failed to remove Pendley from his position as acting director of BLM.

The Utah BLM has been working hard to put up signs for 17 new Wilderness Areas in the San Rafael Swell designated by the John D. Dingell Act of 2019.

The actual management of these areas won’t change much since they were already Wilderness Study Areas. However, adding them officially to the National Wilderness Preservation System assures that they will continue to be preserved in a natural condition for the future.

During his tenure as Utah Division of Wildlife Resources director from 2012 to 2017, Sheehan allowed anti-conservation gun-sports groups to gain undue influence over Utah’s wildlife management. He opposed the reintroduction of wolves to Utah and oversaw a highly unscientific cougar management plan that the Humane Society criticized for allowing “free-for-all killing sprees on Utah’s rare cougar populations.”

Sheehan is a member of Safari Club International, a group of wealthy trophy hunters that, according to a recent investigation by Humane Society International, promotes recreational killing of endangered species. As President Trump’s deputy director of the U.S. Fish and Wildlife Service, Sheehan tried to reverse a ban on importing elephant trophies.

Steve Bloch, legal director of the Southern Utah Wilderness Alliance says, “Sheehan’s resumé is littered with the kind of parochial influence that makes him particularly unsuited to manage public lands. He has a history of making decisions at the behest of state and local governments, as well as high-dollar hunting groups and energy interests that promote the heavy-handed destruction of public lands and wildlife.”

BLM manages 23 million acres of public lands in Utah, representing about 42% of the state.

The Bureau of Land Management (BLM) has removed controversial parcels near Arches and Canyonland National Parks from a massive Utah BLM oil and gas lease sale scheduled for September.

Thanks to intense public pressure, BLM withdrew all parcels from the Moab Field Office, reducing the sale from 77 to 23 parcels.

A letter from Congressman Alan Lowenthal (D-47-CA), chair of the House Subcommittee on Energy and Mineral Resources, points out that in previous Grand County lease sales, “all of the leases that sold at these sales went for the minimum bid, which earned the State of Utah less than $9,000 in revenue.”

Bicycles are not allowed in designated Wilderness areas, so a few segments of the Bonneville Shoreline trail are off-limits to bikes, hemmed in by private property on one side and wilderness on the other. In July, Representative Curtis (R-UT-3) and Senator Romney (R-UT) introduced the Bonneville Shoreline Trail Enhancement Act, which would slice 326.27 acres out of the Mount Olympus Wilderness Area for a multi-use trail corridor, adding back about the same area of designated wilderness in a Mill Creek Canyon property formerly owned by the Boy Scouts of America.

The group Save Our Canyons has concerns about the deal since the International Mountain Biking Association (IMBA) that influenced the plan seems to be doing an end-run around both regional trail planning and the Mountain Accord planning process for the Wasatch Mountains. They say the Mill Creek property does not have the same quality or value as the Mount Olympus Wilderness Area, and the trail segments that cross wilderness are steep single-track that are inappropriate for a multi-use trail.

A legislative audit of the Utah Division of Air Quality (DAQ) found that the agency is generally performing well.

The budget for clean air programs and research has increased significantly since 2015, which is good news. By way of improvement, the audit also says that DAQ needs better record keeping; it questions the effectiveness of a program to help low-income households convert from wood-burning heat; and it encourages DAQ to increase inspections of oil and gas wells in the Uinta Basin.

Performance Audit of the Division of Air Quality olag.utah.gov/olag-doc/2020-05_RPT.pdf

Salt Lake City has a fancy new recycling plant to sort the contents of your blue bin. Waste Management, the city’s recycling vendor, recently opened a $17 million Materials Recovery Facility for single-stream waste with the capacity to process more than 280 tons of recyclables per day. (See “What Covid means for the Three R’s,” this issue.)

Using screens, optical sorters and magnets, the plant separates materials to reduce contamination so that they actually get recycled instead of being sent to the landfill.

Salt Lake City currently recycles or composts 42% of the waste collected from residents.

What can I put in my curbside containers? slc.gov/sustainability/waste-management/curbside/recycling-can/

Utah Open Lands is working towards a September 10 deadline to purchase 27 acres of open space at the mouth of Little Cottonwood Canyon.

The land could become a regional trailhead for the Bonneville Shoreline Trail or it could become an upscale housing development, de­pending on whether the $3 million purchase price can be raised in time.

A challenge grant from AHE/CI Trust doubles donations made before the deadline.