Solar in the City: Beyond Blue Sky

Making clean electricity on the personal front. Also: The Home Unplugged – a little experiment for you to see what appliances use how much juice, by Tom Hunter. 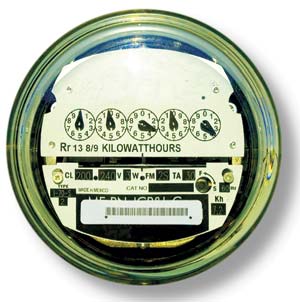 The climate is changing, and so are we, as we look for ways to live more sustainable lives. What will give us the biggest bang for our global warming buck? Ditching the car is right up there. So is installing solar panels.

Buildings account for approximately 72% of electricity use in the United States. Currently, 98% of the generation capacity of power plants is from conventional sources, which all come with a significant environmental impact. In Utah, nearly 90% of electrical energy comes from coal, widely considered the dirtiest source of electricity because of its damaging mining practices, high transportation costs and high levels of pollutants.

My partner Tom and I installed a 1.44 kilowatt photovoltaic system on our garage in 2003. Reducing my reliance on fossil fuels was a very high priority for me. I wanted to ride a bike to work each day and generate electricity from solar power.

I had read Home Power magazine for years so I understood the concepts. However, I didn’t really think solar power applied to city people like me who had access to grid power. Then in 2003 the Utah legislature passed a net metering law that allows consumers to generate their own power (for example, solar, wind, microhydro), use what they need, sell any excess back to the utility, and buy whatever extra power they may need. A city slicker like me could have solar electric panels on the roof? I was in.

Solar Energy International (SEI) in Carbondale, Colorado is one of the coolest places on the planet. The roof and yard is filled with all manner, style and size of solar panels. The front patio has several solar ovens, each filled with goodies on sunny days. The parking lot is filled with bikes, electric cars, and biodiesel cars.  SEI shares its space with the local community radio station, and their mission is “to provide education and technical assistance so that others will be empowered to use renewable energy technologies.” I went there to learn more about photovotaics. One day when a fellow student complained about the lack of awareness of sustainability in her hometown, I was really struck by an instructor’s response. She obviously knew that some people deny climate change is happening, but she never interacted with them. Her students were all people learning to produce their own solar power, building strawbale homes, brewing their own biodiesel, putting up wind generators, installing solar hot water panels and growing some portion of their own food. The instructor had work to do teaching the willing, and she just couldn’t be concerned about those not willing to concede that humanity has a major problem.

I started with the two-week Intro to Photovoltaics course, but ultimately ended up spending three months studying there. For people who pay attention, many experiences are life-changing, but my first day at SEI was certainly a spiritual awakening for me. These were my people and this was my life course. I couldn’t wait to get these panels up on the roof and start generating my own electricity.

Paring electricity use to a minimum is the first step in utilizing a solar electric system. Compact fluorescent lightbulbs, available in full spectrum, use 25% of the power of an incandescent. Home during the day? Put in a solar light tube. Energy Star appliances are another no-brainer. How old is your water heater? Maybe you could dry clothes on a line, not in a clothes dryer. Buy a new refrigerator, if necessary.

I don’t often advocate buying a newer item, even if it saves money, as there is a lot of embodied energy in anything new. How much energy did it take to manufacture and ship that new Prius to you? Most assuredly, it took a fair bit, so does it still make sense to buy it? I usually try to roughly calculate the embodied energy before buying the item. For example, I don’t drive much so buying a more fuel-efficient car when my old car is fairly fuel-efficient already just doesn’t make sense. However, a refrigerator is on 24 hours a day, seven days a week. Unless you choose to live without one, it’s drawing power every day. Older, less efficient items like this usually warrant replacement.

Once the electric bills are as low as they can go (average usage in the US is 900 kilowatt hours per month), then  examine the feasibility of a solar electric system. The common wisdom says that $1 spent on conservation saves about the same amount on the electric bill as $3 to $5 spent on solar electric. So, it simply doesn’t make sense to put solar panels on a wasteful building. Conservation first, solar power second.

Grid-tied photovoltaics are not high maintenance systems, but choosing the solar electric system that’s right for you can be overwhelming. Monocrystalline, polycrystalline, thin-film, roof shingles, building integrated photovoltaics… what to do? I recommend finding someone you trust to discuss the different options; an expert who will take the time to explain the technology in layman’s terms.

When do solar electric systems pay back? As far as I’m concerned, they pay back in about three or four years, when they have generated more energy than it took to make them (solar panels have embodied energy, too). In its lifetime, a solar panel will generate seven to 14 times the energy it took to manufacture it.

For those focused on the financial payback period, think long term, very long term, at this point. For Rocky Mountain Power customers, we are currently paying approximately 7 cents per kilowatt hour. If a 2-kilowatt system produces 250 kilowatt hours of electricity per month, and electricity costs 7 cents per kilowatt hour, monthly savings are about $17.50 and yearly savings around $210. The cost of a $20,000 system, minus the state and federal tax credits, winds up at $16,000. That gives us a payback of 76 years at today’s rates.

Of course, rates continue to rise (an increase is being finalized as I write), and few people believe electrical rates will ever decrease again. Still, saving money can’t be the motivating factor for those installing photovoltaics in 2006.

While solar electric power is a viable option today, it is cost prohibitive for most Utahns. My advice is to make your house as energy-efficient as possible and wait for a state rebate or utility buydown program to come online (many other states have them, and Utah is bound to catch up at some point). And, in the meantime keep buying that Blue Sky windpower.  u

Ashley Patterson is the owner of the Green Building Center in Salt Lake City. This is her first article for CATALYST.