Our dog once pooped out a quarter and we thought we were going to get rich. The only problem is, it turned out to be a one-time occurrence. That’s the trouble with making predictions; you might not have enough data.

However, that doesn’t stop people from making predictions; especially when it’s the first year of a new decade. So, here are my nine.

1. The University of Phoenix becomes a real national campus, with an enrollment of 2.5 million, and winds up winning every NCAA championship in every sport but still loses money because it spends more on advertising than faculty. Additionally, they have no alumni support because nobody wants to admit that’s where they graduated from.

2. Google becomes worse than the FBI under J. Edgar Hoover and blackmails everyone in the world with their archived photos, email and Web search histories. Shocked, stupid people run around screaming, “But the founders of Google go to Burning Man, man.” Google also sponsors five bowl games, moves every building in Dubai to Oakland and purchases the Pacific Ocean with cash.

3. GM’s On-Star has the capability to shut down any car when it senses the driver using a cell phone, but it is voted down by senators citing personal freedom issue. In a counter intuitive move, the Senate mandates x-rays, body scans and the correct recitation of the pledge of allegiance for all airline travelers.

4. More people watch American Idol than vote, so the U.S. government just gives up and uses the same system to pick a president. Unfortunately (for most of the country) Orrin Hatch is the only one with professional singing credentials.

5. Retailers announce that holiday sales figures were too high and that consumers really need to lower their confidence. The government sucks money out of the economy to slow it down. 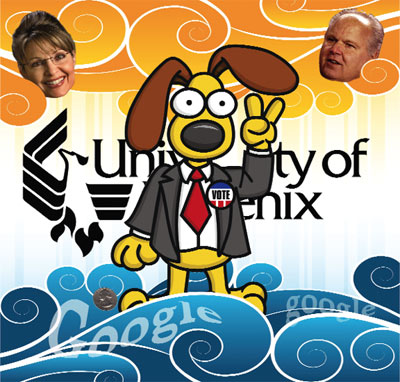 6. A small town in northern California elects a dog as mayor just for the publicity. Everyone feels so much healthier after two years of mandated naps, long walks and liver treats; the dog is reelected in a landslide vote.

7. Sarah Palin and Rush Limbaugh dump there respective spouses, get married and spend the rest of their lives searching for the real Obama birth certificate and the five scientists that can prove that global warming is a hoax. Their children grow up rebellious gay vegetarian pacifists and later form a New Age Techno-Klezmer band called “Pit Bull Ate My Hockey Mom.”

8. Barack Obama wins the National League Most Valuable Player, Heisman Trophy and the Field’s Medal for Math
ematics in the same year, mainly on the basis of a really great speech and potential.

9. In a mind-boggling mixture of liberalism and conservatism, the Utah Legislature authorizes gay couples to marry and adopt guns—and carry them to school. Thous
ands of former deer hunters finally come out of the closet and admit that they really just liked the camping part.

Dennis Hinkamp says he left out the pessimistic parts.