I can’t claim to have been a longtime friend of Randy Wirth but I was a longtime acquaintance. We were both steadfast members of the old-guys-in-Speedos-eeewww (OGISE) club. We were fit, fast and still doing flip turns. If you don’t like the way it looks, that is your problem. We just refused to swim in knee-length cloth bags.

We first met at the Utah State University pool in the early ’80s and talked as recently as a month ago at the local gym pool. The majority of our most meaningful conversations took place either before or after swimming. 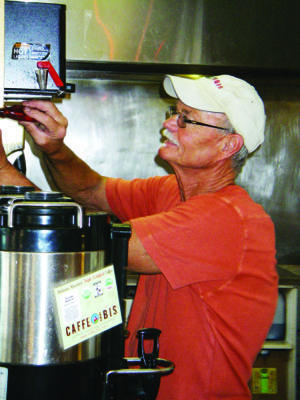 The last conversation we had was something along the lines of “wow, all the stuff we thought would never happen in Cache Valley has happened”—coffee shops all over campus, a thriving gardener’s market, free bus service, beer sales on Sundays and even

passable ethnic food. While staying in one place for 30-plus years can sometimes compost your brain, it compensates with perspective.

Few people plan to stay anywhere that long; time just slowly leaks out of a tire of indeterminate size. I gathered from some of those early swim talks that he had a plan to sell his business, say aloha to Logan and move to Kauai because the surfing here has always sucked. I probably had plans for something bigger, better and more exotic myself, but neither the Pulitzers nor the US Olympic Committee ever called. That said, I don’t think either of us were living lives of regret.

I’m not sure why his plans changed but it was probably coffee-induced. That’s what most people associate with Randy Wirth and Caffe Ibis now, but 23 years ago it was just a locker room dream. Mountain Grown, Mountain Roasted, triple certified; you’ve probably heard of it because it is now sold at all your hipper coffee spots around the west. In Logan, Randy and Sally (Sears), spouses, might as well have been Sting and Madonna because nobody used their last names. Or, they were just referred to as “the Caffe Ibis founders.”

All those years ago we had the most boring locker room guy talk ever. We discussed Peet’s Coffee and the Santa Cruz Roasting Company like they were favorite centerfolds. There were even whispers about some sexy upstart coffee shop called Starbucks.

When not talking about his passion for roasting coffee he could regale you with stories about crashing helicopters in Vietnam, but it didn’t seem like he identified himself with that era. Randy didn’t want to just sell coffee; he wanted to trace each bean back to its literal roots. Why not do that in Logan, Utah, even though for 70% of the population, coffee was against their religion? It had all the makings of a failed pipe dream but somehow, his vision materialized.

There are many shades of leafy green granola crunchy personalities in the Cache Valley ranging from those with look-at-me solar panels to the more subtle composters and activists. I feel pretty good about myself if I remember to bring my own bag to the grocery store one out of 10 trips. Randy really was a more behind-the-scenes sort of greenie. His triple certification of organic, fair trade and bird-friendly coffee really was revolutionary in a now-Starbucks-buzzed world. It’s hard to sell a really responsible product because mostly people just look at the price and the label, but he made it work.

While the Caffe Ibis itself never got much bigger, the scope of the coffee business he started expanded across the West. It seemed like the coolest coffee shops wherever I traveled were serving Ibis coffee. It was one thing that made me proud of Logan. I would send Ibis coffee as gifts and take it to Burning Man with me to give away. The last time I checked the Ibis coffee locator, I saw that it was sold in every western state and is even forging its way eastward into places such as Lubbock, Texas and Columbia, Missouri.

If you have been to any charity event in the valley you probably have seen his coffee or benefited from Ibis contributions. So in memory of Randy, have a cup of coffee even if you don’t like or condone coffee and toast one of the best people ever to grace the coffee world.

Dennis Hinkamp wishes peace to all the surviving family and friends and he is always looking for new guys to join OGISE.

This article was originally published on May 4, 2014.