When did we stop trying?
—by Dennis Hinkamp

If we can put a man on the moon, why can’t we [fill in the blank]” was an old-timey admonition for why the world wasn’t progressing quite the way we hoped it would. The last time we put a man on the moon was 1972. I was a sophomore in high school and half the world’s population wasn’t even born yet.

We made it to the moon, drove a dune buggy around it and made it back with less technology than you have on a basic smart phone. Of course, during this renaissance of technology we also built the Ford Pinto. How could we have come so far and done so little?

Well, we are advancing in music from 8-track to cassettes to CDs to thin air. Anybody with a car can now fulfill the dream of being a cab driver. Anyone with a spare room and a doughnut can call themselves a bed and breakfast. Anyone with a computer can publish their own craftiness or gut-wrenching recipes. 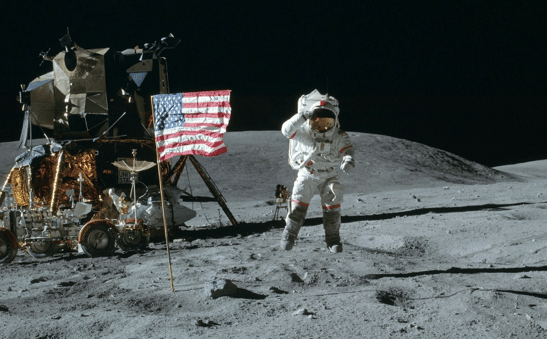 In the spirit of non-innovation and retro hipness, I’m starting the hash tag, #IWCPAMOTMWCW? (If we can put a man on the moon why can’t we—?) I would also grow a beard, but I am genetically incapable.

We have the technology to signal warnings to sales attendants in the same store that we’ve already been asked “do you need help?” Maybe a low-tech funny paper hat or an expensive start-up app on your cell phone that beeps on the sales staff’s phones when they get within five meters of you. Call it a sales pitch restraining order. #IWCPAMOTMWCW?

You should be able to get your own pitch-free radio station for a year once you have contributed to the fund drive. #IWCPAMOTMWCW?

We should have mechanical dogs that follow us around and give us constant positive affirmations. “You’re the best! Have you lost weight? Age is just a number. I need to be recharged, how about you?” #IWCPAMOTMWCW?

How about an IP address-seeking missile? Why is it that my cell phone provider knows my every move but we cannot immediately strike down terrorists the moment they post a video of a beheading, stoning or manifesto? #IWCPAMOTMWCW?

You want a trophy? You can pick up all you want for 59 cents apiece at Deseret Industries. Okay, so you want an animal trophy on the wall to project your prowess? How about a cow head for every 500 hamburgers you eat or chicken feet for every 12 omelets? You stalked all these down in the supermarket. Why not be proud of it? #IWCPAMOTMWCW?

Dennis Hinkamp would like you to shoot for the moon or at least moon somebody in the coming year. #JustStopAlready