SLC Mayor Rocky Anderson has till the end of this year to complete his administration's ambitious list of goals.
by Rocky Anderson 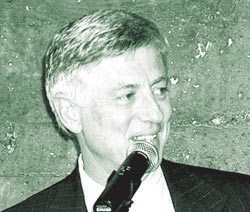 Mayor Rocky Anderson's administration has received high grades on many fronts for improving life in Salt Lake City, particularly in areas of sustainability. With only eight months remaining on an eight year career, will Rocky rest on his laurels?

Don't bet on it. We asked him to give us an overview of what's been accomplished in his tenure, and to share his vision for his time remaining in office. From garbage collection to preventing global warming – our mayor has a plan. Does this man sleep? What does he eat for breakfast?

Salt Lake City has made tremendous progress since 2000 in improving infrastructure, reducing crime, improving the environment, providing world-class after-school and summer programs for young people, and, in the area of criminal justice, focusing on solutions rather than retribution.

Our achievements reflect an approach to governance that treats all issues affecting the people of Salt Lake City as worthy of attention and action. Whether the matter is garbage collection, federal housing policy, a disastrous war of aggression, or the prospect of catastrophic global climate change, it is the responsibility of all leaders in the business, religious, or civic communities – including municipal officials – to take a stand and take effective action. We're all in this together, and we all have a duty to do our part in pursuing solutions.

Working together with the remarkable city government team, I have made an extensive list of goals for my final months in office, building on past successes to continue improving the quality of life for Salt Lake City residents. Accompanying are some highlights among our goals, placed in the context of past achievements.

Since the beginning of my administration, the city has acquired or converted over 450 acres of critical public lands to open space. Through a settlement with North Salt Lake one of the last undeveloped parcels of Lake Bonneville shoreline – an ancient, precious geoantiquity – will be preserved. Salt Lake City continues the work to preserve valuable foothill lands and protect vital watershed areas by strongly opposing ill-conceived development plans such as the proposed interconnect tunnel and roads between ski resorts.

In 2001, the Salt Lake City Green program, a comprehensive initiative designed to enhance sustainability, promote public health, and improve the efficiency of government and corporate operations, was created. In 2002, responding  to the scientific consensus on the reality and danger of climate change, I committed Salt Lake City to reduce emissions of global warming pollution from our municipal operations 21% from 2001 levels by 2012. Already, six years early, we have surpassed that target, reducing greenhouse gas emissions from by 31% from 2001 levels.

The city has initiated a public campaign against high-polluting vehicles by promoting a hotline residents can call (944-SMOG) when they witness vehicles emitting dangerous levels of exhaust. Salt Lake city is also the first municipality to offset all carbon emissions from city-related air travel through the preservation of rainforest lands. In the coming year, we seek to expand recycling service to multi-unit residential developments and businesses and will launch a major campaign to improve our poor local air quality.

Salt Lake City has made great strides  in climate protection, but disastrous climate change will not be prevented unless other governmental entities, businesses and individuals also begin to use clean, renewable sources of fuel and reduce global warming pollution. The city works hard to leverage our successes by inspiring other governmental entities to act. I have attended and presented at national and international gatherings on global warming and energy policy, including the Clinton Global Initiative, a symposium at George Washington University Law School, and a Newsweek conference on global environmental leadership. I will continue to advocate nationally for improving sustainability and efficienciey as an integral part of combatting global warming; Salt Lake City will co-host the third annual Sundance Summit: A Mayors' Gathering on Climate Protection.

Crime has increased in most large cities during the past year, but serious crime in Salt Lake City is down 8% from 2005 and 10.7% from 2004. This marks the lowest level of serious crime in Salt Lake City in 1years. The Police Department and the City Prosecutor's Office have been instrumental in implementing a comprehensive restorative justice program that addresses the root causes of crime and the needs of victims, offenders and the wider community. The Police Department will continue its remarkable progress in efforts to recruit sworn and non-sworn officers, particularly within the ethnic minority community. The Mayor's Office is also implementing a public campaign to raise awareness about the tragic problem of sexual violence in our community.

This administration also works to enliven the experience of residents and visitors to Salt Lake City. To address the outdated liquor laws which make our city inhospitable to visitors, I recently formed a citizens' task force on liquor law reform. We also plan to begin a Sunday farmers' market and implement the first phase of improvements to historic Pioneer Park, an underutilized, critically important green space in the heart of our downtown.

These are just a few of the many ways the mayor's office strives to improve quality of life for all Salt Lake City residents during my final year in office. We encourage any feedback and suggestions regarding these goals; our residents' active participation in civic life is crucial to our efforts. Thank you for all of your support throughout my administration. Working together, we can build on our past successes and make Salt Lake City a safer, healthier, more dynamic place to live.

Create Citizens Task Force for liquor law reform in an effort to support economic development and tourism promotion. Explore elimination of private club membership and other barriers to hospitality and business development.

Create a Celebrity Walk – handprints, footprints and signatures of local and national celebrities

Salt Lake City Reads Together – generate more publicity. Set up program on city website where people can keep track of the books they have read. Book reading contest. Be involved with more events surrounding the program.

Salt Lake City Gets Fit Together – develop and implement next program

Create electronic historical archive detailing major policy issues and legacy of the administration. Archive will be accessible on the Internet as a historical resource and enhance institutional memory.

Lobby for state incentives for consumers to utilize alternative energy

Solicit ideas from the public, including students, about how we can achieve better air quality and protect our climate

Anti-idling mechanisms to be installed in city-owned trucks

All electricity used by city covered by renewable energy credits such as Pax Natura, Blue Sky (or other RECs)

All fluorescents or LED in all city buildings. No incandescent bulbs, including holiday lighting

Explain / provide to the general public solutions to global warming

Submit and promote ordinance that will, in a few years, require all buildings to meet LEED requirements / Solicit community support

Ordinance prohibiting recyclable materials to be deposited in refuse cans

Ramp up recycling for businesses and apartments

Reduce the tonnage of municipal waste collected in the city and dumped in landfill by improving the scope and effectiveness of the city's current recycling programs and by developing new initiatives. Research segregation of all recyclable materials or classification (waste-to-energy) at landfill. Move toward zero waste

Improve air quality in Salt Lake City by reducing the city's dependence on and consumption of environmentally unfriendly energy sources used to power and heat public buildings and fuel vehicles; and by protecting and propagating the city's forest and landscape resources

Protect and preserve our water supply for current and future use

Ensure that future water/sewer/stormwater infrastructure development occurs in a manner consistent with existing standards of public safety, efficiency, and quality