Shall We Dance: Waltzing with Robots

How to make machines seem alive.
by Amy Brunvand 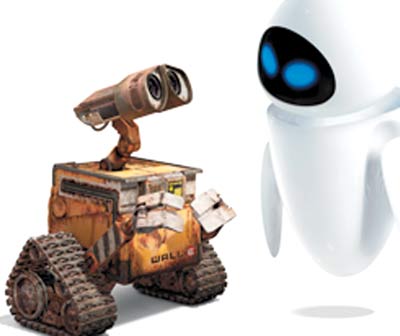 Wall-E, the wonderful new animated film from Pixar, is a kid’s movie that portrays a postapocalyptic dystopia resulting from out-of-control consumer culture. (I wondered how long it will be before Happy Meals start to come with little plastic Wall-E’s inside, but apparently Disney doesn’t seem to be allowing that.) Wall-E is the last operable unit of a formerly immense robot army left behind to clean up the mess after human negligence rendered Earth uninhabitable. All of the remaining people have embarked on an endless luxury cruise to outer space. The plot is basically android meets femme-bot: Wall-E dreams of love, he finds it (and in the process he actually does succeed in saving the Earth). But what do robots (particularly G-rated robots) in love do?

It turns out that they dance.

In the pivotal love scene Wall-E and Eve, his ovoid love, jet though outer space like cosmic fireflies. Watching them through a window are a man and a woman, two giant marshmallow people lying floating beds because after 700 years in space their legs have atrophied. The pair has just barely escaped a virtual-reality consumer dystopia and had their eyes opened to the beauty of the here-and-now. As they watch the robots spiral though space they reach out to hold pudgy hands with each other.

The outer-space dance scene transforms the robots Pinnocchio-style into “real little boys,” but it also restores soul to the human characters. Since the people at Pixar are computer geeks and techies, I think that they knew exactly what they were doing by using dance as the bridge between ghost and machine.

In real life, scientists are teaching robots to dance precisely in an effort to give them more “soul.” Looking up dancing robots in an engineering database eventually led me to a oddly compelling YouTube video that shows a slim, serious-looking Asian man in a tuxedo dancing with a robot, or more precisely a femmebot since the robot is clearly a girl. Her helmet hairdo, expressionless Barbie-doll face and rigid ballgown are made out of monochrome magenta plastic. She’s got on a princess dress with little puffed sleeves, a nipped-in waist, a huge flared skirt scalloped like a seashell, and a big bow on her head that looks oddly like Minnie Mouse ears. The tuxedo guy makes an exaggerated formal bow and the robot turns towards him. She lifts her mechanical arms and they embrace. Waltz music begins to play and they start to dance, he taking slow, purposeful steps and she gliding across the floor on hidden wheels.

The pink ballroom-dancing robot is named MS DanceR (it stands for Mobile Smart Dance Robot), and the Japanese research team that invented her has published scientific articles to justify why anyone would bother teaching robots to dance. In tech-speak they explain, “If robots could move not only passively, but also actively based on human intentions, environments, knowledge of tasks, etc., we could realize a more effective human-robot coordination system than the conventional one.” MS DanceR is outfitted with an omni-directional mobile base, a body force sensor and a computer program that tells the wheels where to go. In other words, she is an elaborate electronic marionette controlled by invisible strings. Perhaps that explains why the dancing scientist seems a bit robotic himself.  If his movements are not precise, the robot won’t get the cue.

“A skilled dancer could achieve the same results with a shopping cart,” complains one YouTube viewer who suspects the tuxedo guy of merely pushing the robot around. But watch the human dancer closely and it’s clear that he really is directing the robot. The control system for the robot is ballroom dance steps—something that I doubt was especially easy to learn.

Why bother to dance with robots? One reason is that dancing is a link between freeform human behavior and the kind of patterned behavior that machines can easily accomplish.  If you wanted to look like a robot you could mime herky-jerky movements as Anthony Daniels did playing C-3PO in Star Wars to convince us that a guy in a robot suit was really a machine. If you want a machine to look human you have to do the opposite and smooth out the motion. In sci-fi terms, dancing robots mean the difference between obviously mechanical humanoids like C-3PO or Robby (another guy in a robot suit) and androids like The Terminator that, at least in movies, get mistaken for real people.

This idea of using dance to make machines seem more lifelike inspired Marek Michalowski of Carnegie Mellon University and Hideki Kozima of Japan’s National Institute of Communications Technology to build the world’s cutest dancing robot which is named “Keepon.” Keepon looks like the adorable love-child of a Marshmallow Peeps and Frosty the Snowman. He has a microphone nose and eyes made out of cameras so he can “see” and “hear” what’s going on and respond by nodding, shaking, bobbing and rocking. If you look at the robot he looks right back at you, tilts his head and bobs up and down like a happy puppy.

Keepon’s inventors explain that social behavior is like a dance that helps regulate human interactions with each other. They say, “If we neglect to endow our robots with the ability to perceive subtle human rhythms and to move dynamically in corresponding temporal patterns, they will never get beyond the stilted, rigid interaction that people currently expect from machines.” After testing Keepon with toddlers the researchers concluded that “Robots like Keepon have the potential to stimulate children’s ‘sense of wonder’ and to make them aware that the ‘wonder’ will be shared with others.”

Amy Brunvand is a University of Utah librarian and a dance enthusiast.