Shall We Dance?: Utah thought of it

U of U student concerts are hidden dance treasures.
by Amy Brunvand

Last month I went to hear Adam Sklute, artistic director of Ballet West, speak at the University of Utah emeritus luncheon (as a guest—I’m not that old). He’s a charming guy with a lot of big ideas, and his speech was a riff on the theme of “What does an artistic director do, anyway?” But since he was talking to a bunch of retired professors, he also lavished praise on the close relationship between University of Utah dance programs and professional dance companies in Salt Lake City.

Sklute wasn’t just buttering up possible donors—the University of Utah Ballet and Modern Dance departments really have played a pivotal role in the development of Utah’s professional dance scene. The U has had dance in the curriculum ever since 1892, when Maud May Babcock was the first woman on the faculty (and a snappy dresser too, in her bloomers and sailor blouse). Babcock taught dance as part of women’s physical education 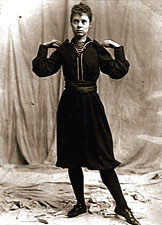 courses, and on the groundwork that “Miss B” laid, Elizabeth Hayes founded the Modern Dance Department in 1948, and Willam Christensen started the first ballet program at an American university in 1951. In turn, these academic programs spawned professional companies Ballet West, Ririe-Woodbury Dance Company and the Children’s Dance Theatre, which is part of the Virginia Tanner Creative Dance Program. The Repertory Dance Theatre also got its start at the U as an artist-in-residence program. In a 1968 New York Times article, the influential dance critic Clive Barnes noted that that existing modern dance companies were all based around a single charismatic figure, and wrote that the idea of a repertory company performing works by many choreographers was “revolutionary,” and came “not a moment too soon.” Pondering the question, “Why Salt Lake City” (and not someplace larger and more cosmopolitan), Barnes cited the vigorous dance program at the Univer­s­i­ty of Utah, and admitted that most important reason that Utah got the repertory company was that “Utah thought of it.”

Why is this ancient history important nowadays? Because the reputation of the University of Utah dance program means it attracts top-notch professors and bright young students eager to get on stage and show off what they are learning. In other words, student concerts at the U are an under-publicized and inexpensive way to see some very good dancing. Yes, student work can sometimes be pretentious, derivative and over-reaching, but it can also be fresh, energetic and innovative. The surprise is part of the fun. Dance students are tapped into what’s new and what’s cool, and they are free to experiment, since they don’t need to please an audience with familiar “war horses.” 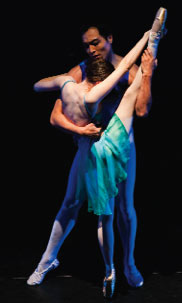 In fact, student performances at the U are probably the reason I am writing about dance right now. Back in the 1960s and ’70s my mom took me to see modern dance concerts at Kingsbury Hall, and watching them made me feel sophisticated and grown-up. (Now that I’m old enough to be hanging out with emeriti professors, it seems a bit ironic to think that those dance students were probably still in their teens.) At student concerts I first got a chance to see various approaches to dance, because when you watch serious dance students you learn a little bit of what they are learning.

The Marriott Center for Dance at the U is also a hidden treasure of a performance venue. Buy the cheap seats at the Capitol Theatre downtown and you need binoculars to see the itty-bitty ballerinas down on stage, but at the Hayes/Christen­sen theatre in the Marriott Center for Dance you can examine the tutus up close. There are only 14 steeply tiered rows of seats, so you are always close and you can always see. The price is right too—general admission tickets are usually about $10.

This February the Department of Modern Dance Performing Dance Company spring concert is worth a look. The program includes faculty works by Stephen Koester and Donna White, as well as works by Juan Carlos Claudio (whom you have seen on stage with Ririe-Woodbury Dance Company and SB Dance) and Eric Handman (whose piece is inspired by science fiction cyborgs and aliens).

Note that these names are the same ones you might see on the playbill for a professional company, so if the recession is cutting into your entertainment budget, U of U student performances might be just the ticket.

This article was originally published on January 28, 2010.