Shall We Dance: Private Lessons

What it takes to dance with the stars.
by Amy Brunvand 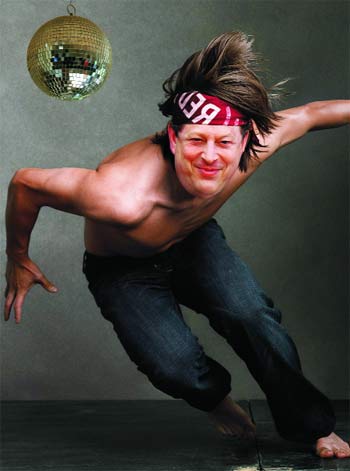 The 2008 presidential primaries are less than seven months away, and as the overcrowded field of presidential hopefuls scrambles for position, the burning question is, in your opinion which 2008 presidential candidate would be the best contestant on "Dancing with the Stars"? Back in March 2007, a Roper poll determined that the top pick for dancing queen is Hillary Rodham Clinton (she'd look great in sequins, don't you think?) closely followed by Barack "Barry" Obama in second place and John "Breck Girl" Edwards taking bronze. With a nickname like "Slick Dancing Mitt", one might have expected Utah favorite Mitt Romney to have stronger appeal among ballroom dance fans, but he merely managed a tie with Newt "The Grinch" Gingrich and both of them trailed behind Al Gore even though a) Al Gore's most definitive on-stage dancing moment was the distinctively wooden Macarena which he performed at the 1996 Democratic National Convention, and b) Al Gore says he is not running for president.

Now that I think of it, there's a certain compelling appeal to the notion of Al Gore on "Dancing with the Stars." Historically, he has generally been considered to lack the requisite alpha-male body language for a serious presidential contender, and that means of all the candidates, he probably has the most to gain from taking private dance lessons. Think of Sally Potter in "Tango Lesson" or Koji Yakusho in the Japanese (and far superior) version of "Dansu wo shimashô ka?" ("Shall we Dance"). The message in both these movies is, even if you aren't a natural, it is possible with the help of an inspiring teacher to acquire the self-confidence, sex appeal and style of a really good dancer.

And isn't that one reason why 19 million or so people tune in to "Dancing with the Stars" every week? With a competent teacher, a bit of rehearsal time and a fabulous outfit, that could be anybody-even me-dancing like a pro on TV.

Of course, private dance lessons like the ones the contestants get on "Dancing with the Stars" are not cheap. While group lessons or dance workshops usually cost somewhere around $10-20, expect to pay $40 to over $75 per hour to get intensive personal attention. That means it's a luxury I can't afford very often. When I spend money for a lesson, it has to be with a teacher I really admire and want to work with. In fact, choosing a dance teacher can be a bit like accepting a Zen master or a martial arts sensei. Ideally, my dance teachers are people I admire because they can actually do things I want to be able to do. The teacher can help me correct bad habits not only to look good, but so I don't hit a learning plateau because of poor technique. If it's an effective lesson, I come away knowing what it feels like not to be a beginner any more, and that makes it possible to make the leap past being a beginner.

Private lessons have some specific advantages over group lessons: You can ask questions without annoying all the other students. You get personal feedback to avoid encoding bad habits in your muscle memory. If you are learning faster or slower than your usual dance partner, private lessons are an excellent way to get equal again without bickering. If you already know one dance style, a private lesson is a great way to quickly transition into a new style. Private dance lessons are also a way to jump-start your ability for a dance emergency such as an upcoming wedding or the sudden availability of a desirable dance partner who prefers a style you never learned.

But ultimately, private dance lessons aren't about imitating someone who happens to be a better dancer than you. They are about studying with someone who really knows how to project and externalize their internal intentions. If you can learn how to do the same, you won't be trapped forever expressing your inner dancer via a clumsy Macarena.

So if the pollsters ever call me on the phone I think I, too, might pick longshot Al Gore. Ever since his movie-star turn in "An Inconvenient Truth," Gore has started to seem like an everyman with hidden passions, like he could whip off his metaphorical glasses and turn into- well, if not Superman, at least Apolo Ohno.