Shall We Dance? “Of Meat and Marrow”

An alternative Halloween from SB Dance.
—by Amy Brunvand

For a long time Odyssey Dance Theatre had cornered the market on Halloween dance performances in Salt Lake City with their ever popular Thriller (playing this year from Sept. 27-Nov. 2, 2013), but this Halloween there’s a new game in town.

SB Dance has been around since 1998. But this is the first year that the company is doing a Halloween show: Of Meat and Marrow: An Alternative Halloween.

You might quibble that SB Dance already did Of Meat and Marrow this past June, but one of the really great things about SB Dance is how Stephen Brown and company keep working and re-working their material into new shapes. This habit of evolving creates an ongoing and particularly symbiotic relationship between SB Dance and its faithful fans. So the new Halloween show will be kind of the same, but not the same (though Brown assured me that the human cannonball is still intact). 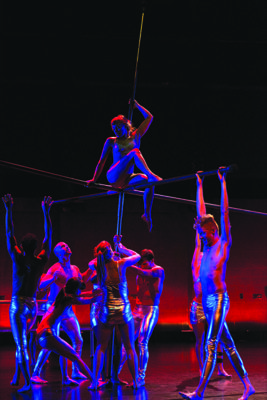 As for doing a Halloween show, Brown says he’s aiming at a different audience than the pop-culture appeal of the annual Odyssey Dance productions. He says, “I appreciate Thriller and they play to a certain young audience but I think it’s time for an adult night out. I’m ready to take Hallo­ween back.

“Halloween has always been my favorite holiday because you have so much permission,” he continues. “Although it is followed by All Saints Day, Halloween has few religious or ethnic connotations. It’s the most pagan of holidays. There’s nothing else like it. Halloween is better than New Year because it’s not that big a deal. And it deals with the dead, not just pirates and princesses, but tombstones and skeletons. It’s a ripe opportunity for the kind of thing I do.”

Brown is aiming for a certain mood: “We want to have those levels of dark and creepy, and then kind of sexy and then ooooh!” (he makes a sound like an awestruck ghost). Compared to the June version, Brown says, he has cleaned up the choreography and rock show (live music is written and performed by the local band Totem & Taboo) in order to tell a story. Plus he has added a surprise ending. Brown is full of surprises, so that’s no surprise.

Opening night there will be an after(life) party (tickets sold separately, unless you buy season tickets and then you’ll get one with your ticket package). “I don’t dig just spilling out of the theater after the show,” says Brown. “You want to be with people who have just been through the same experience.” He mentions a bit regretfully that costumes are not essential for after-partygoers, because “how can you sit in the theater in a costume?” but still, if you go it might be fun to wear something that leans a bit goth.

In person, Brown exudes a “Big-Bang Theory”-style geekishness (in a previous life as a biologist he worked in a fruit fly research lab), so it’s no surprise that he geeks out a bit over the technical aspects of the show. “We’re mixing the show in surround sound and doing a bunch of stuff that people might not be aware of,” he says. “It’s innovative, but it’s also technically very difficult to pull this off— subtle things that I think people will appreciate, like our 14-foot jack. That thing is crazy!” I point out that a 14-foot jack is actually not very subtle. “Hey, I’m still a fart joke kind of guy,” he says apologetically.

Which is why the show is going to be scary and fun but also accessible for people don’t consider themselves modern dance aficionados. “I have fun with things,” Brown says, ” It’s not precious art. It’s pretty earthy stuff. You don’t need to speak any secret codes here.” As far as the adult content, “There’s an F bomb or two and some buns and boobs, and a very disturbing claustrophobic scene with screaming.”

SB Dance is able to pull this kind of thing off because the company has a long-term relationship with dancers who simply love the mater­ial. “Oh my God I have such good performers these days!” Brown exclaims. For over a decade he has worked with dancers he describes as “crazy brave”—people like Juan Carlos Claudio, Liberty Valentine, Nathan Shaw and Jenny Larsen. The dancers and SB Dance have matured together over the years to offer a kind of performance that you simply won’t see anywhere else.

This article was originally published on September 29, 2013.