Shall We Dance? My 12 Years at CATALYST

How Amy became a dance writer and learned to love deadlines.
by Amy Brunvand

Dancers are the messengers of the gods.
—Martha Graham

My first dance article for CATALYST appeared in the February 2000 issue. It was about Argentine tango and I wrote it by accident, except that it was one of those “accidents” that seems nudged into being by the Forces of the Universe. Here’s how it happened:

In 1987 I had just finished my Master of Library Science degree and landed my dream job in Durango, Colorado – a place that consistently appears on Outside Magazine lists of “Best towns in America.” I wanted to go mountain biking, skiing, hiking, backpacking and rock climbing. The only problem was, I didn’t know a soul there.

This is how bad it was: On my 27th birthday I had absolutely nobody to celebrate with. I went out to a bar to drown my loneliness in a beer. An inebriated Vietnam-era veteran started hitting on me which I fended off rather too politely because the conversation turned to the war-time horrors he had witnessed and pretty soon we were sobbing together about the atrocity of war. Clearly I needed a better social life, and at the grocery store I happened to see a flyer for an International Folk Dance Club. Well, why not?

So, Friday night I went to the address on the flyer and there I found a tall, ultra skinny California hippy-type bearded man, mid-40ish, dancing all by himself to scratchy vinyl records of Eastern European tunes. If my social life had been going better I probably would not have stayed. However, as I said, I was feeling very lonely so I introduced myself and the dancing guy taught me a few steps and after a while some other people showed up. The Durango International Folk Dance Club turned out to be one of the most delightful and supportive social groups I’ve ever been part of, and yet what we were doing seemed a bit weird — gathering every week to dance to music that had nothing at all to do with our cultural heritage or the place where we lived. But somehow recreational dancing had become the central pivot of my life.

One day we International Folk­dancers were in Cortez, Colorado dressed in Scottish kilts and white gowns demonstrating Scottish country dances on a stage in the park. After our performance a little boy from the Southern Ute Tribe, about eight years old, came up to me and said shyly, “I didn’t know white people had dancing clothes.”

Some years later, after getting my heart broken, I decided to leave Durango. Trying to find a new direction I made a list of 100 things I might like to do with my future life and one thing on the list was “Write about dance.” I wanted to solve the mystery of how going to a silly recreational dance group could touch my soul so deeply, and what it might possibly mean to have dancing clothes. 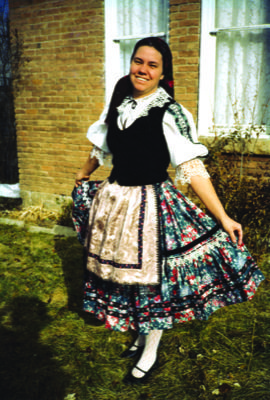 So I moved back to Salt Lake City, my home town, and took up Argentine Tango. It was January 2000 and I was excited that a famous tango teacher was coming to town—a man renowned for his ability to jump-start absolute beginners into the intricacies of tango. I was so in love with tango myself that I wanted everybody to dance, so I phoned up CATALYST to suggest they cover this event.

“Can you give me the name of your dance writer?” I asked.

“Well,” said Greta, “I don’t have one right now. She just quit. Why don’t you write the article?”

Which I had not been thinking of when I called, but it struck me immediately that I had just been handed my opportunity to write about dance. And I have been doing so, monthly, ever since.

I’m deeply grateful to CATALYST for sending me on this journey, and thank you for reading, too. The secret wish of my heart is that over the years my words have inspired somebody somewhere to put on their dancing clothes.

This article was originally published on October 29, 2012.