Shall We Dance? Gymnastics 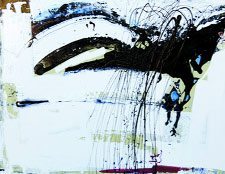 Blending sport and art at a Red Rocks meet.
by Amy Brunvand

In February, the University of Utah women’s gymnastics team was ranked the number one collegiate gymnastics team in the nation. This month you have two more chances to see the Red Rocks perform at the Huntsman Center.

Even if you don’t typically like sports, you might like gymnastics. At least, a number of research studies demonstrate that people who don’t care for team sports such as football or basketball nonetheless often enjoy watching “aesthetic sports” such as gymnastics or figure skating. One likely reason is that it’s easy to appreciate the skill and artistry of gymnasts without knowing any of the rules. After watching a football play I’m often mystified, wondering what happened? But even if you can’t judge the technical perfection of an Arabian Double Salto, gymnastic routines have a “gee whiz, how’d they do that?” quality, and the tumbling sequences can be downright thrilling since they look dangerous despite all the padding underneath the equipment.

William A. Sands captures the special appeal of gymnastics in an introduction he wrote for the book “Scientific Aspects of Women’s Gymnastics”:

In the world of sport, women’s artistic gymnastics is an anomaly. Lacking a ball, unconcerned with ground-acquisition strategies, unworried about the actions of opponent-gymnastics does not fit the mold of most modern sport. Gymnastics is an unusual blend of sport and art, acrobatics and dance, stiffness and suppleness, flying and crawling, maturity and youth.

But even though a surprising amount of scholarly literature tries to pick apart the boundaries between sport and art, it is doubtful that philosophical discussions matter much to the audience at a Red Rocks gymnastics meet. Part of the fun is just being in the Huntsman Center arena with all the cheerleaders, junk food vendors, pep bands, JumboTron replays and fans dancing to disco-era relics. But in contrast to the macho competitiveness at most sporting events, gymnastics meets have a distinctly feminine vibe-an unusually large portion of the audience consists of squealing little girls with their moms (my demographic, by the way) – and the athletes are judged partly on how well they dance (and not just in the end zone).

A gymnastics meet includes four events: parallel bars and vault which are mostly about acrobatic tricks; and balance beam and floor routines which both require the gymnast to perform dance elements as well as acrobatics. Gymnasts can earn or lose points based on the quality of leaps, jumps, hops, turns and “body waves” that are mostly drawn from ballet. 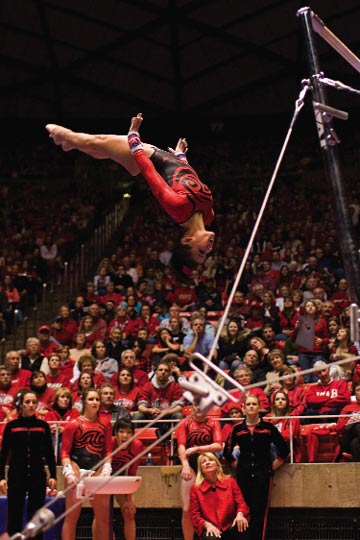 Beam and floor events have distinct personalities, too: Dancing on the balance beam is nerve-wracking; the movement quality expresses tension, extreme concentration and lurking danger. Even the best gymnast could tumble off the narrow ledge at any time, and you can hear a collective sigh of relief from the spectators after her dismount. On the other hand, floor routines, which are set to music, have a free-flying exuberance that looks like tremendous fun. Springs underneath the mat give the gymnasts super-human powers to leap high and spin in the air. They can even belly-flop and bounce back up unharmed like rubberized cartoon characters. Sometimes the little girls in the stands dance or clap along with the music when their favorite gymnast performs.

According to the Federation Internationale de Gymnastique rule book (which is full of nifty little diagrams of leaping and spinning gymnasts that look like Eadweard Muybridge stop-motion photographs), gymnasts lose dance points for faults such as these:

These criteria make it clear that gymnastic dancing is not just about flowing movement, it is also a mode of expression so that the gymnast, who is, after all, a very small woman performing solo in a huge stadium, can use dance movements as a way to interact with her fans.

Dance is the key element that separates a great gymnastics routine from one that is merely good, according to Nancy Roach in a 1989 essay on “What Makes a Floor and Beam Routine Extraordinary.”

So, with Red Rocks doing especially well this year, Salt Lakers have a chance to see some really good gymnastics. It is a truly extraordinary experience to be in the arena watching one gymnast fill a stadium with as much athletic energy as a whole basketball team can generate. But I have to say, it’s also fun for me, a mom with little girls, to watch a sport that’s so unabashedly girly, and yet so astoundingly tough. 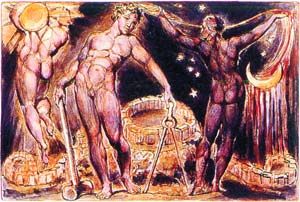