Shall We Dance: Fast Forward 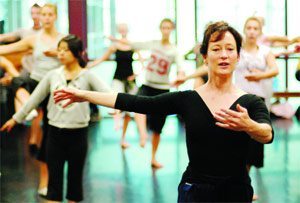 Andrea Beckham, of the faculty at the University of Texas (above). Austin Larry Keigwin of New York-based Keigwin + Company (right).

Have you noticed how much interesting stuff the Ririe-Woodbury Dance Company has been doing lately? Worries are over that the company might fade with its aging founders, especially after their critical and popular success touring revivals of Alwin Nikolais works. Associate Artistic Director Charlotte Boye-Christensen, who joined the company in 2002, deserves a lot of credit for helping to raise the profile of the company and attract talented new choreographers. This year Larry Keigwin of New York-based Keigwin + Company and Andrea Beckham, on the faculty at the University of Texas Austin, were two guest instructors at summer workshops. Both have world premieres of new works on the "Fast Forward" program this month.

Larry Keigwin says he had never seen Utah except out of an airplane window until he came to teach at Ririe-Woodbury in July. He has a lean, black-clad New York look and a constantly ringing cell phone, and when he stepped outside of the air-conditioned Rose Wagner theatre he spread his arms wide and declared, "I love the heat! I love the dancers we're working with. I love the company. I love the theatre. I don't love that there are not cabs to hail."

Reviewers describe Keigwin's work as "urban," "burlesque," "witty" and "Warholesque" (an adjective that especially pleases him), and he recently got rave reviews for a work titled "Bolero NYC," which is a New York City streetscape danced to the driving music of Ravel's "Bolero." Behind flashes of creative inspiration, Keigwin has a mind for meticulous detail. He cites photography and architecture as artistic inspiration. To get the on-stage demographics of Bolero NYC just right, he researched U.S. Census Bureau data. The thought of matching his cast to the data gets him going on a riff imagining what "Bolero SLC" might look like.

Besides his modern dance company Keigwin does a show called "Keigwin Kabaret" which he describes as "sort of a contemporary vaudeville-like collage using talented misfits."

Andrea Beckham has flyaway strands of reddish-brown hair and cheekbones like Meryl Streep. The first thing she noticed about Utah was the quality of light: "Did you see the sunset yesterday? It was positively purple and red and extraordinary!" Beckham and Charlotte Boye-Christensen have been friends since they met in graduate school, but Beckham says the growing reputation of the Ririe-Woodbury Dance Company was the main draw for her to come to Salt Lake City.

"The dancers here are all really athletic," she says. "My style is very physical. It's definite, big movement, and I use a ballet vocabulary. When Charlotte sent me a DVD of the dancers I saw they could handle the technique so I'm able to experiment with how much energy they can handle."

Beckham, who sometimes teaches movement classes for acting students, says that to her dance is a basic form of human communication: "I watch body language. I use dance technique to stylize human gestures. Charlotte tells me that my dancing has the cleanest movement she's seen."

Beckham has an undergraduate degree in sociology that prompts her to analyze her art and she says, "It's always about human interaction. I don't expect to change the world with a dance, but I do want to make people in the audience feel something. Like you go to a basketball game and get endorphins and you feel joyful! I would like to go to a dance performance and feel….Love," she sighs and brings her hand to her heart.

Beckham began ballet classes when she was four years old. When she was in college, she enrolled in a modern dance course taught by Yakov Sharir. "It changed my life," says Beckham. "I could feel the wind in my hair. I didn't feel like a body, I felt like a conduit between heaven and Earth, and things were flowing through me. In modern dance I found my mode of expression."

She seems almost surprised to discover the intensity of her own artistic impulse: "The life of an artist is experiential, not a life of accumulation," she says. "It's a passion. I wouldn't wish it on anyone, it's like a disease."

Beckham's new piece for Ririe-Woodbury is called "There & Not There." She says, "It's about being present and alive and connected to people around you-or not. The energy is supporting, being seen, present, arriving, then sometimes someone becomes depressed, uninvolved. Choreography is a problem to be solved, and the problem for this piece is: What talks someone powerful and present into dropping out or spacing out?

"I'm making this work in five days. It's intense. When I leave I'm exhilarated and exhausted. I've been working on this movement material for months but it's all new for the dancers. The movement is fast, it's big, it covers spaces. It's not about Utah or the landscape or the sunset, but the color and wide open spaces make it appropriate to do it here."