Shall We Dance: Do Elephants Dance?

Getting down at political parties

There are no Republican folk songs.
-U. Utah Phillips 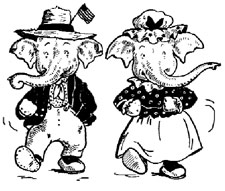 After a gala reception held at the 2005 annual meeting of the American Political Science Association, a PhD student named Ed Webb wrote an editorial in the society's journal giving the event a thumbs down. "Many came," he wrote, "Most ate and drank, everybody talked…but few danced. Political Science was not having a funky good time."

According to Webb, the conservative bent and general stuffiness of academic political scientists revealed itself in the conference attendees' embarrassed reluctance to attempt the Electric Slide. Webb thought the failure to dance was partly a matter of dignity, but underneath was a serious matter of social equality. He noted a brief outbreak of dancing at the New Political Science reception, but the old-guard tenured professors held their seats. Webb wondered, "Would more junior members of the profession not feel more empowered to speak up in the organized sections' business meetings if they had seen that severe-looking chairperson doing the Bus Stop the night before?" He noted that the perestroika section of the organization had proposed a dance party for next year and heartily supported the idea as a way to level the playing field: "In the interest of loosening the prevailing hierarchy," he wrote, "we need to get everyone dancing."

During the 2004 primary election, Slate.com blogger Mickey Kaus also noticed that political progressives seem less intimidated about getting up to boogie in public. "Deanies dance. Did you know that?" he asked in amazement as he compared John Kerry's supporters to Howard Dean's: "Some in the handsome yuppie crowd at the Kerry victory rally tapped their feet as various rock rousers (e.g., Bruce Springsteen's "No Surrender") were played over the P.A. system. But the gnomish bearded Deanies across town actually swing their partners in response to far crunchier musical selections (e.g., Natalie Merchant). These people are scary."

As one of those scary people (or at least the partner of one), I can tell you that Kaus was right-Howard Dean supporters are noticeably un-shy about dancing. I recall a Dean fund raiser in Utah where former Park City Mayor Dana Williams brought his band and played well into the night while we all danced. There was also enthusiastic dancing to a salsa band at Mayor Rocky Anderson's victory party in 2003 (the next day several of my co-workers mentioned that they had seen me on TV).

However, I doubt that a few examples prove Democratic voters are generally more fun at parties. As a matter of fact, dancing was on the printed schedule for the 2005 Utah Democratic Party Jefferson-Jackson dinner, but by the time the tables were pushed aside to make room, everyone had already devoured their rubber chicken and gone home.

So is it true that dancers and nondancers divide themselves along political party lines? Maybe. One scholarly study of people who go to contra dances characterized participants as holding "countercultural values" which the author defined as support for environmental issues, avoidance of blatant consumerism, perceived solidarity with third world cultures (expressed by wearing tie-dye and batik cotton skirts), and opposition to the military-industrial complex. I go contra dancing and that does sound a lot like me, but on the other hand, I hate to think we are so predictable. I've met people at contra dances who don't seem like that at all.

I must confess that I'm not completely sure whether Utah Republicans dance or not (outside of "Saturday's Voyeur," of course). I am a registered Democrat so I never go to any Republican events. Out of curiosity, I looked up "Republican Party and Dancing" in the Salt Lake Tribune archives, but the only article that came up was about Kim Lawson, the Kanab mayor who encouraged us all to have "a full quiver of children." The article quoted his sister who said that when he was a teenager she used to make fun of his dancing because he didn't have much rhythm.

So, on this admittedly slim evidence, it seems that Ed Webb's dancing political science professors really were a microcosm of real-life politics. Utah's conservatives are probably just dying to cut loose in public, but they are justifiably terrified of getting laughed at. Progressives aren't afraid to get down, because they aren't as worried about losing status. (But wouldn't it be nice if they had more status?) In the spirit of perestroika (as Ed Webb would put it), the existing power dynamic could be usefully undermined to everyone's benefit. We need to get everyone dancing.

This article was originally published on November 22, 2006.