Shall We Dance?: Dance Haiku

RDT unforgets the dances of Michio Ito.
by Amy Brunvand

When I read that Repertory Dance theatre received a $120,000 grant from the National Endowment for the Arts to learn and present works by Japanese choreographer Michio Ito, I thought, who the heck is that? Since I write about dance, I was embarrassed that I didn’t recognize the name.

So it made me feel better to hear Linda Smith, artistic director of RDT, say that when dance critic Marcia Segal suggested the company get some Ito pieces in their repertory, she had the same response.

In fact, during the formative years of modern dance between the two world wars, Michio Ito was right in the thick of things. He danced with Martha Graham, Doris Humphrey and Charles Weidman; he taught Pauline Koner, Ruth St. Denis, Clare Booth Luce and Lester Horton.

An angular art deco illustration printed on Ito’s original dance programs isn’t that far off in appearance from the real Ito. Photos from the 1920s show a slender young man with smoldering eyes and an asymmetrical haircut that could be a prototype for contemporary manga (the Japanese equivalent of comic strips). 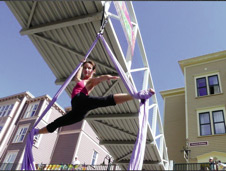 By all accounts, Ito was a charismatic, gregarious and colorful figure. In 1916, when the poet William Butler Yeats took an interest in Japanese Noh theatre, he got Ito to help him set the movement for his play “At the Hawk’s Well,” and this is what Yeats wrote about him:

In the studio and in the drawing-room alone where the lighting was the light we are most accustomed to, did I see him as the tragic image that has stirred my imagination. There, where no studied lighting, no stage-picture made an artificial world, he was able, as he rose from the floor where he had been sitting crossed-legged or as he threw out an arm, to recede from us into some more powerful life.

Ito described his own work as a perfect harmonization of East and West, and in that light the trajectory of his career is almost cinematically ironic. In order to support his art, he choreographed in Hollywood where his dances appeared in movies that portrayed simplistic ethnic stereotypes. For his efforts as peacemaker, Ito was arrested the day after Pearl Harbor was bombed. Two years later he went back to Japan as part of a prisoner exchange. He survived the war, but Satoru Shimazki, a Japanese dancer who has made it his mission to restore Ito’s works, said, “World War II tore out his heart, and his life.”

When Shimazaki first brought Ito’s dances back to the U.S., the Los Angeles Times reviewer called them “perfectly crafted dance haiku.” RDT first learned a few of Ito’s dances from Shimazaki in the early 1990s, but Smith says “Currently the only piece we perform is “Warrior” [1927] which you saw in our ‘Time Capsule’ program.”

At the SummerDance Workshop this month and next, two teachers from Japan will help RDT add 10 more of Ito’s dances to the company’s permanent repertory. RDT is also working with dance scholar Mary Jean Cowell to create a lecture-demonstration to document the work.

Linda Smith is especially excited that company dancers get to study Ito’s unique movement system, which is based on a series of formal gestures and incorporates ideas from the Dalcroze method emphasizing music’s connection to dance, drama and poetry. “It takes some time to learn the technique,” says Smith. “These days so much of modern dance is full of release and a kind of gymnastic/athletic quality. This has a very, very distinctive quality. Just like learning ballet with different steps and poses that you perfect. The reach toward perfective is refreshing in an era when everything goes.”

Salt Lake City audiences will be able to see Michio Ito’s re-created dances performed to live piano music in March next year. It’s something to look forward to.

Amy Brunvand is a librarian and a dance enthusiast.