The Mandala dance of the 21 Praises of Tara.

Many years ago I was looking for souvenirs in Kathman­du, Nepal when the shopkeeper called me over and said he wanted to show me a marvelous painting worth over $1,000. He unlocked a safe and pulled out a scroll which he unrolled on a table to reveal a picture of a smiling, seated woman. She had melon-like breasts and a wasp-waist and her skin was the color of spring leaves, so bright it seemed to glow. He said her name was Green Tara. I didn’t buy the painting which was beyond my budget, and in any case her glowing green skin made me think of space aliens. Nonetheless, the image of Tara stayed with me. 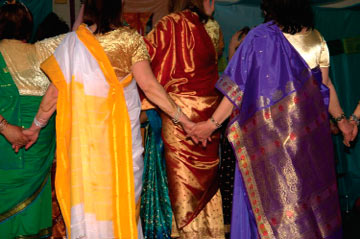 So having had only a brief introduction to Tara, I was intrigued by an invitation calling “all Goddess wannabes”-women, men, teens and children-to an introductory session of “The Mandala Dance of the 21 praises of Tara.” Jenny Mish who was teaching the Tara dance explained that she and Jane Grau are holding introductory dances in order to generate interest and gather a group of about 30 people to learn and perform the dance ritual this month.

Mish began the dance lesson by telling the story of Tara: Buddhist sutras say that in order to attain enlightenment women should strive to be reborn in a male body, so when a princess named Moon of Wisdom attained enlightenment the monks told her to pray in order to become a man. The princess rejected their suggestion and replied:

Here there is no man, there is no woman,
No self, no person, and no consciousness.
Labeling “male” or “female’ has no essence,
But deceives the evil-minded world.

Then she made a vow to reincarnate eternally in a woman’s body in order to help end the world’s suffering, and she became Tara.

The fact that Tara is female by choice makes her an especially powerful symbol of the divine feminine. For that reason, the Salt Lake City Tara dancers have partnered with the Ixchel Foundation (a non-profit organization that empowers women by nurturing creative development and transformative healing) to present a public performance of the dance in recognition of Sexual Assault Awareness Month. 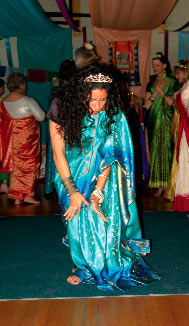 In the Green Tara painting I remember Tara sat by herself, but in other paintings green-skinned Tara is a large central figure surrounded by 21 little Taras whose skin is red, blue, green, white, black or yellow. The image with little Taras illustrates a specific Buddhist prayer with a name that translates somewhat awkwardly from Sanskrit as “The Praise in 21 Homages to our lady the Goddess Arya-Tara, with its benefits.” In traditional Tibetan practice this prayer is chanted, not danced.

The Mandala Dance of the 21 Praises of Tara was created in 1983 by an American Buddhist woman called Prema Dasara, so it is an adaptation of Tibetan Buddhism by Western culture. One reason for dancing is that it is so hard to translate words. Expressed in movement, the prayer ritual more easily crosses cultural boundaries. Since it was first performed it has been endorsed by the Dalai Lama, and has made its way from America back to traditional Buddhist cultures in places such as India, Nepal, Thailand and Bhutan.

At the introductory workshop we learned simple, swaying footwork and gestures that directly express the “21 Praises of Tara.” In a public performance, we would have been “protectors,” men and women who surround a sacred space for female dancers who wear splendid silk saris and embody various aspects of Tara. As energy spirals towards each central Tara, she gets birthed out the front, dances a self-choreographed expression of that praise, and re-enters the center of the mandala. In Buddhist art, a mandala is a circular design that symbolizes the universe.

Participating in the dance is a powerful experience of community, says Jenny Mish. “It requires concentration and focus to remember the mantra and gestures. In addition to learning the steps we also eat together, iron the saris together -there is a ‘girl party’ as we dress.” She describes the dance as an “invitation to set aside human limitations and become the goddess,” but emphasizes that there is no pressure to adopt Buddhist viewpoints. “The teacher [Parvati Forrest Anee Burke] is extremely good at describing how Tara practice can fit into one’s life,” she says. “It’s an invitation to find those qualities within yourself.” 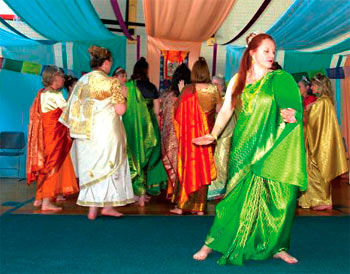 I remembered my first impression of Tara as a green space alien, which honestly, didn’t seem quite respectful. But as we danced through the 21 praises we came to a verse about joy and laughter. It turns out that humor is one of Tara’s qualities after all, and surely one reason to paint a picture of a goddess (or dance her praises, for that matter) is so that people can learn to recognize her.

Books about Tara
“In Praise of Tara: Songs to the Saviouress,” by Martin Willson.
“The Cult of Tara: Magic and Ritual in Tibet,” by Stephan Beyer.

Introduction to the Tara Dance. April 7, 7 pm. All are welcome.

Weekend Workshop. April 24-26. Taught by Parvati Forrest Anee Burke. Cost: $125 ($100 before April 10). For men and women who want to perform the dance. Attendance for the full weekend is required. To register: www.ixchelfoundation.org/tara.htm

The 21 Praises of Tara