Steampunk Cinderella: A ballet and an opera, too, at the Universtiy of Utah
–by Amy Brunvand

The tale of Cinderella is over 1,000 years old. Versions of the story have been found all over the world and even today it is one of the folktales most often told and re-told. One reason Cinderella is still popular after all these years is, like all folktales, it’s a powerful metaphor that means different things to different people.

Folklorist Jan Yolen, writing in the 1983 anthology Cinderella: A Case­book, says Americans love the rags-to-riches aspect of the story, but they have it all wrong: Cinderella is a “shrewd and practical girl persevering and winning a share of the power,” not a dishrag waiting to be rescued by magic. Cinderella gets blamed for princess-obsessed little girls (e.g. Cinderella Ate my Daughter: Dispatches from the Front Lines of the New Girly-Girl Culture, by Peggy Orenstein), and for encouraging unrealistic romantic fantasies in women who should know better. But really, to call something a “Cinderella story” usually means that someone who has been unfairly neglected has finally got the success she deserves.

So, even if you have already seen the Walt Disney animated Cinderella (1949) and the new Walt Disney live-action Cinderella (2015), there is always room for more Cinderellas. In fact, the sugar-sweet Disney versions practically demand an antidote to the passive heroine who has to be rescued by mice. 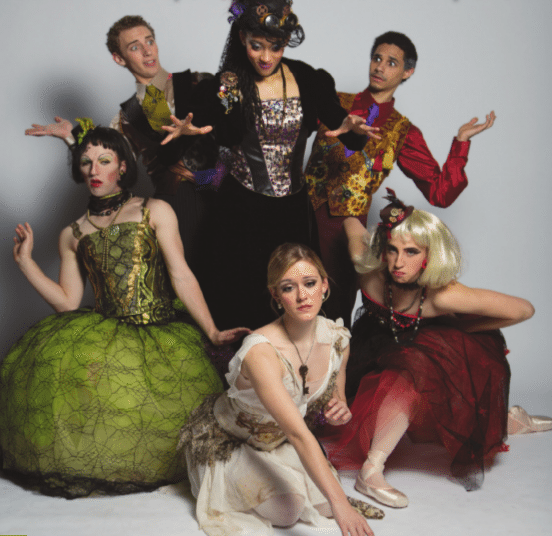 This April, everyone’s favorite princess tale will make two appearances at the University or Utah, both as a full-length story ballet and also as an opera. This is an opportunity to see two different interpretations with a twist. The two student productions share artistic elements. Both use steampunk design inspired by the theme of ticking clockwork gears combined with the aesthetic of 19th-century Paris; both use the same gorgeously painted backdrops selected in a student competition; and both include the same ballet dream-sequence.

The Utah Ballet version of Cinderella (April 3 & 4) uses the familiar music by Sergei Prokofiev but other than that it’s all brand new, including original choreography by University of Utah ballet professor Jong-Hoon “Jay” Kim. Kim, Originally from South Korea, Kim also heard Asian versions of the Cinderella story while growing up. “There are a million different versions of Cinderella,” he says, “But we want to do it in a contemporary way.” Kim’s contemporary take finds a Cinderella story in ballet itself. Like Cinderella, dancers, he says, “are always hoping to go to the ball. If you are living a good life, even with evil forces around, the final outcome has to be a good one.”

The dancers will have brand new costumes reminiscent of the ones in the musical Wicked, thanks to a $17,200 grant from the Thomas D. Dee II Endowment. Due to the expense of costumes and the like, the University of Utah puts on a full-length ballet only every two years or so, and these performances are especially ambitious. Brent Schneider, Chair of the Ballet Department, is particularly excited by the student collaboration. The ballet cast alone includes 60 dancers accompanied by a 65-piece student orchestra. “Playing for a live ballet is wildly different from playing for a symphony,” Schneider says. “A symphony is the artistic vision of the conductor. Ballet adds the artistic vision of the chorographer.”

Art students in Professor Kim Marinez’s mural class designed the hand-painted backdrops used in both the ballet and opera productions. Selected from over 100 submissions, the three final designs were handpainted on giant canvases spread out on the floor at the Utah Opera warehouse. An art exhibit of backdrop design submissions will be on display at Kingsbury Hall during the performances. University film and media students and modern dance students have also been hard at work behind the scenes.

After seeing the Utah Ballet production, don’t pass up tickets for the opera Cendrillon (April 24-25). You’ll see some of the same steampunk artistic elements, but in a completely different artistic vision. The music for Cendrillon is by French composer Jules Massenet, played live by the Utah Philhar­mo­n­ia Orchestra and sung by students in the Lyric Opera Ensemble. Massenet’s comic opera hasn’t been performed before in Salt Lake City, but, its delicate, ethereal and witty music was extremely popular in its day.

The two Cinderella performances are more than just an educational opportunity for U of U students; they are a gift to the community, says Schneider, who worries that K-12 students lack critical exposure to live art. He hopes the community will take advantage of the offering. “Arts education is especially important in the junior high age group,” he says, “because that’s when kids start forming their adult personalities.”

So, get tickets for yourself and take the kids. These Cinderellas are no Disney princesses; this is about immersing yourself in art.

This article was originally published on March 28, 2015.