Author’s Note: The heinous murders of black people in our country have named the evil of racism and how it exists under the guise of white supremacy in the nation broadly, in our home communities locally and individual lives hyper-locally. There is a call demanding answers: How can we use our moral imagination to create and model justice and compassion in our own lives? The following story is the first in a series addressing the need for a community-wide discussion on the importance of developing personal plans of action to help promote a more racially just society. We invite readers to share their personal plans for peace in resistance to passive by-standing.

The current national uprising has most often been labeled in media as a response to the brutal murder of George Floyd by Minneapolis police officers during the last week of May. But across the US, the scale of the anger, shock and concern reminds us that the culprits here are not only the four officers directly involved but nationwide unrestrained police violence, insufficient care and protection of black lives and many, many other evils rooted deeply in the structure of a society that benefits and prioritizes white lives. With strings unraveling, white complacency itself is being called out as a violence of its own.

Online, on social media platforms Instagram, Facebook and Twitter, feeds are streaming with news, discussion and gestures of solidarity. Using a digital voice, young black people across the country and world are demanding an end to racism, police violence, economic oppression and inequality. As someone very much tuned into the politically active, often young and left-leaning scopes of these digital platforms, I can attest that the wave of fast-paced information and discussion is unprecedented.

While movements of a similar caliber to the one we witness now have played out through other forms of media and communication, it is clear that this one is unfolding largely online. According to a 2016 Pew Research Center analysis, the hashtag #BlackLivesMatter first appeared on Twitter in 2013 following the acquittal of George Zimmerman in the fatal shooting of 17-year-old Trayvon Martin. From July, 2013 to March, 2016, every widely known incident of a black person being murdered by police or through hate crimes—Eric Garner (July, 2014), Michael Brown (August, 2014), Tamir Rice (November, 2014), Freddie Gray (April, 2015), Nine African American church members in Charleston (June, 2015)— led to a huge spike in the use of the #BlackLivesMatter hashtag on Twitter. Today’s numbers are ever more historic. Currently, #BlackLivesMatter sits in the caption of just over 21.6 million Instagram posts. 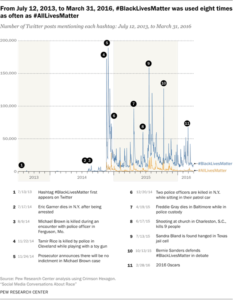 This hashtag is being used deliberately and is but one example of how social media has been harnessed to promote and advance a clear message. The growth of the Black Lives Matter movement, the movement for black liberation, the movement for ending police brutality or however one categorizes the increased efforts spanning the 2010s into today, is directly linked to an online conversation.

In a show of well-meaning activism, non-black, social media active allies are racing to keep up and join the conversation on our personal and organization digital platforms. In our profiles and bios, we’ve replaced the links for our personal websites to websites listing “Ways to help” resources: Petitions to sign, organizations to donate to, black businesses to support and anti-racism education materials and literature. We’ve made separate posts listing specific funds we’ve personally donated to; petitions we’ve signed or emails we’ve sent. We’ve re-posted the posts of others doing the same thing. And many of us haven’t stopped there: We’ve posted videos, articles, quotes, graphics, comics, etc., igniting a fiery hope that tells us, so many people do care. So many people want to help be the change.

The general atmosphere on social media informs that a selfie right now from a white user is inappropriate. It’s insensitive to take up “space” during this powerful moment for your own personal promotion and image. And yet, some of us have stopped to wonder: Is all of the #BlackLivesMatter content we are posting—the circulation of important but repetitive information—in a way, also done for our own personal promotion? If so, is it still helpful? Has the constant wave of “Look at me, I just did this!” posts led to a new kind of unhealthy competition? Worse, a request to be excused of white guilt?

The very fact that we have the privilege to potentially turn off and on our activism or care is the problem. It is a form of white supremacy that white people get to decide when to care about black lives (often when one of those lives has been publicly ended) and when we can cuddle back up complacently to our silence and inactivity.

So, after we’ve signed petitions to defund police, donated to and promoted funds for supporting black people affected most closely by police violence, created a brand-new reading list or followed more black leaders’ podcasts and social media pages, what’s left? How can we prove we mean it?

Perhaps we can’t prove it and perhaps the point isn’t to prove it. Social media is doing its job of dispersing information and lifting important resources and voices. We can participate in this and many would argue that we should. Though, if we really want to “prove” ourselves as allies, we must be allies in real life. We must run our organizations and businesses as allies, consume as allies, vote as allies, live as allies.

Last week, on a national Zoom call—“Defending Black Bodies: A Reproductive Justice Townhall”— several prominent black leaders from across the country asked that along with the dispersion of resources and digital calls to action, white people and organizations each take some time to think critically about our personal and organizational plans for peace and defending black lives in our communities. Do this, they said. Write your plan down. Read it often and reflect every few months on how well you’ve stayed true to it.

Below, an example of how I started mine (it is, of course, still evolving):

Lastly, never stop. Add to your list often. Share it if you think it might help motivate others. Post it on social media if you’d like. Just remember, truth and authenticity are functions of real life and always exist at least somewhat compromised in the digital realm. And it is truth, humility and authenticity that our allyship really needs now. Black lives matter urgently needs to become a function of and practice in our daily lives beyond any online hashtag that we use.

We encourage you to share your own commitments. What are you willing to do differently in your life to defend and protect the fullness of black lives? Will you attend meetings and protests? Bring white people in your life together to push them to change? Give money? Move money? Create and support art? Expand your social circles to include more POC? Develop plans in your organization to support POC leadership roles?

CATALYST welcomes your ideas and hopes to publish any additional contributions in a future article for this series. This effort will continue to push us in new ways, but we must stay engaged and present in the movement forward.

Emily Spacek is a staff writer at CATALYST. In our June issue, she covered the beginning of the current movement in SLC in “This time they can see our pain: Salt Lake City’s recent protests and perspectives from a young black student.” You may email any contributions to this series to her at: Emily.spacek@catalystmagazine.net

This article was originally published on June 11, 2020.