Nature is essential for human existence and good quality of life. Most of nature’s contributions to people are not fully replaceable, and some are irreplaceable.

The Bureau of Land Management (BLM) has released its final plan for the Trump boundaries of Bears Ears National Monument. From the original size of over 1.3 million acres, the monument was reduced to 200,000 acres divided into in two units. Instead of focusing on conservation, the Trump plan calls for new off-road vehicle trails and building utility lines as well as extensive “vegetation removal” which means clearcutting pinion-juniper forests. Rather than simply closing campgrounds and petroglyph sites to target shooting, the Bureau of Land Management asked for comments and might allow shooting.

While this destructive agenda is carried out, the cultural resources plan will be delayed for two years so that conflicts can’t even be identified. The plan fails to include all five tribes in the Bears Ears Intertribal Coalition on the monument management team. 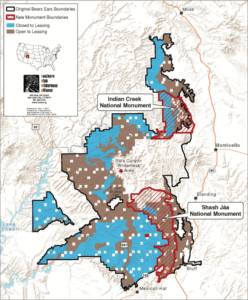 Lawsuits to restore the original Obama boundaries of Bears Ears have not yet been heard in court. Heidi McIntosh, managing attorney of the Earthjustice Rocky Mountains office, offers a ray of hope: “If we win the legal fight to restore Bears Ears National Monument, this plan will just be 800 pages of wasted effort.”

The final management plan has no formal comment period, but dismayed citizens can contact their members of Congress, write letters to the editor, or send letters to the U.S. Department of the Interior.

The Central Wasatch NCRA is a locally driven, consensus-based land use plan that balances conservation and water­shed protection with development for ski areas, private property, recreation and traffic. Coordinated local planning for the Wasatch Mountains began in 2014 with Mountain Accord; CWC is an interlocal agency formed from that process to carry out a future vision of canyon stewardship.

In order to take effect, the Central Wasatch NCRA bill would need to be passed by the U.S. Congress. A previous version of the bill was introduced in 2016 by Congressman Jason Chaffetz and co-sponsored by Mia Love and Chris Stewart but it never became law.

Under a pretense of providing recreation for military personnel, a massive new high-end ski resort development has been announced by Deer Valley near Jordanelle Reservoir.

The “Mayflower Mountain” project is a partnership between the Military Installation Development Authority (MIDA) created by the Utah State Legislature in 2007 and Extell Development, a New York City company famous for building “poor doors” to keep rich and poor tenants separated.

The project has its origins in privatization of public lands engineered by former U.S. Congressman James Hansen. Prior to the 2002 Olympics, Hansen arranged a controversial sale of Forest Service lands to Snow Basin Ski Resort. This privatized property included a cabin owned by Hill Air Force Base that had been used by military personnel for R & R. As a replacement for the cabin, Hansen sneaked another land trade into the 2001 Defense Authorization Act—the 26.5 acre “Red Maple Parcel” in Summit County was transferred to the U.S. Air Force from the Bureau of Land Management, apparently out of spite since Park City wanted to protect the land as open space.

As a federal agency, the Air Force is exempt from local zoning laws so the Red Maple Parcel provided a foot in the door for resort development on adjacent private lands.

The Summit County land-grab has similarities to the Inland Port debacle in Salt Lake City. The MIDA board is entirely appointed by the Utah Legislature with accountability to voters in Wasatch County.

It’s not even clear that military personnel will be able to use the new hotels. Although the developer has promised discounted military room rates, no deal has been arranged for military discounts on Deer Valley lift tickets, currently priced at $209/day.

A small increase in Salt Lake City sales tax has resulted in better bus service. Thanks to the city’s Funding Our Future program, bus routes 2, 9, and 21 now run more often and later into the night.

UTA has also started a new Route 4 along 400 South to connect the West side with Downtown and the University of Utah.

The 0.5% increase in city sales tax, approved in May 2018, also helps pay for street maintenance, affordable housing and public safety.

In 2013 the State of Utah sided with a group of private property owners who claimed a “right” to drive endangered Utah prairie dogs (Cynomys parvidens) to extinction.

Weakening the Endangered Species Act comes during a global extinction crisis. The United Nations reports that the global rate of species extinction is already at higher than the 10-million-year average and is accelerating.

A lawsuit against the rule changes has been filed by Earthjustice on behalf of Center for Biological Diversity, Defenders of Wildlife, Sierra Club, Natural Resources Defense Council, National Parks Conservation Association, WildEarth Guardians and the Humane Society of the United States.

The landfill could impact the millions of birds that depend on Great Salt Lake habitat. Use of a private landfill will also divert revenue from Utah schools since Weber County currently uses a landfill on land leased from the School and Institutional Trust Lands Administration (SITLA).

Is it feasible for Washington County to pay back the cost of a $1.43 billion (2015 dollars) Lake Powell pipeline? A legislative audit says “maybe,” if population grows and there are substantial increases in impact fees, water rates and property taxes.

What’s more, the current price of the Lake Powell Pipeline is actually $3.2 billion, 40% higher than the figure used in the auditors’ calculation.

The Trump administration has been sneaking nuclear waste shipments into Nevada.  Last month a coalition of concerned citizen groups has sent a formal letter to Governor Gary Herbert asking him to take a firm stance against changes in federal policy that allow shipments of nuclear waste through Utah and neighboring states. According to the letter, the U.S. Dept. of Energy (DOE) sent mislabeled low-level radioactive waste to the Nevada National Security Site (formerly known as the Nevada Test Site) in July. DOE also shipped weapons-grade plutonium to Nevada without notifying anyone about the hazard. Apparently the radioactive waste went along I-40 through New Mexico and Arizona. 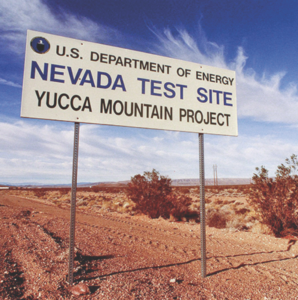 Trump’s energy policy promotes nuclear power and domestic uranium production. In 2018, Congress voted to resume the licensing process for the Yucca Mountain Nuclear Waste Repository that was shuttered in 2010 by the Obama administration due to intense opposition from people in Nevada. The uranium industry was highly influential in Trump’s 2017 decision to radically downsize Bears Ears National Monument, and is currently trying to re-activate uranium mining near Grand Canyon National Park (in order to illustrate the threat, Grand Canyon Trust has mapped mining claims established prior to a 2012 ban).

The letter points out that hazardous material shipments are likely to pass through the controversial inland port slated to be built near the Salt Lake City International Airport.

This article was originally published on August 30, 2019.