The magic isn’t in the cards, but in the stories they provoke

A tarot deck is made up of 78 cards divided into two parts: the minor arcana and the major arcana, arcana meaning “secret” or “mystery.” The minor arcana, structured more or less like a standard deck of playing cards, covers roughly two-thirds of the deck and offers wisdom on the day-to-day dilemmas we all encounter, important but not necessarily life-changing.

The major arcana tells a story of creation and destruction, life and death and rebirth, self-discovery, self-recovery. Twenty-two cards in a set sequence guide the querent through The Fool’s Journey, wherein our intrepid, naive explorer, The Fool, meets mentors (The Magician, The High Priestess, The Empress, The Emperor, and The Hierophant) before encountering the possibility of personal choice in The Lovers card and leaving safety for the unknown in The Chariot. From there, The Fool acquires Strength and meets The Hermit in order to go within and find wisdom in solitude. The Wheel of Fortune is the next stop, teaching The Fool about larger cycles and patterns, before allowing her to come face-to-face with Justice, practice surrender with The Hanged Man, and finally, embody the ultimate loss of Death.

You might think the journey ends there, but no; Death only serves as a portal to more ephemeral realms. Temperance is waiting there, preparing The Fool for a meeting with The Devil, where she’ll take stock of all that keeps her chained. From there, The Tower brings destruction to clear out the inessential, followed by the bright hope of The Star, the wild self-acceptance of The Moon, and the clarity of The Sun. Having spent all this time in the underworld and passed through its concentric lessons, awakening comes in the Judgment card; our hero is resurrected and made aware of her true self and calling. The tale completes itself in The World as she sees her place in the interconnected universe and prepares to cycle back to the beginning, becoming The Fool once more.

As a tarot reader, I see myself in each of these cards. I’m The Fool, to be sure, but I am also the structured and rigid Emperor, the open-hearted soul of Strength, a shadowy, nocturnal figure most at home in The Moon. I see similar amalgamations in everyone. Tarot has a unique power to facilitate a befriending of these seemingly disparate parts of ourselves. The simplest way to understand the cards is to recognize how they’ve operated in our own stories.

I bought my first deck in 2014 and rushed home to open it. I went through the cards and accompanying guidebook, not absorbing much until I got to card 16, The Tower. It showed a lightning bolt striking a medieval fortress, its top thrown off like a lid, its halls on fire. Two people are mid-air, thrown to their deaths by the mayhem inside their once-stable home. 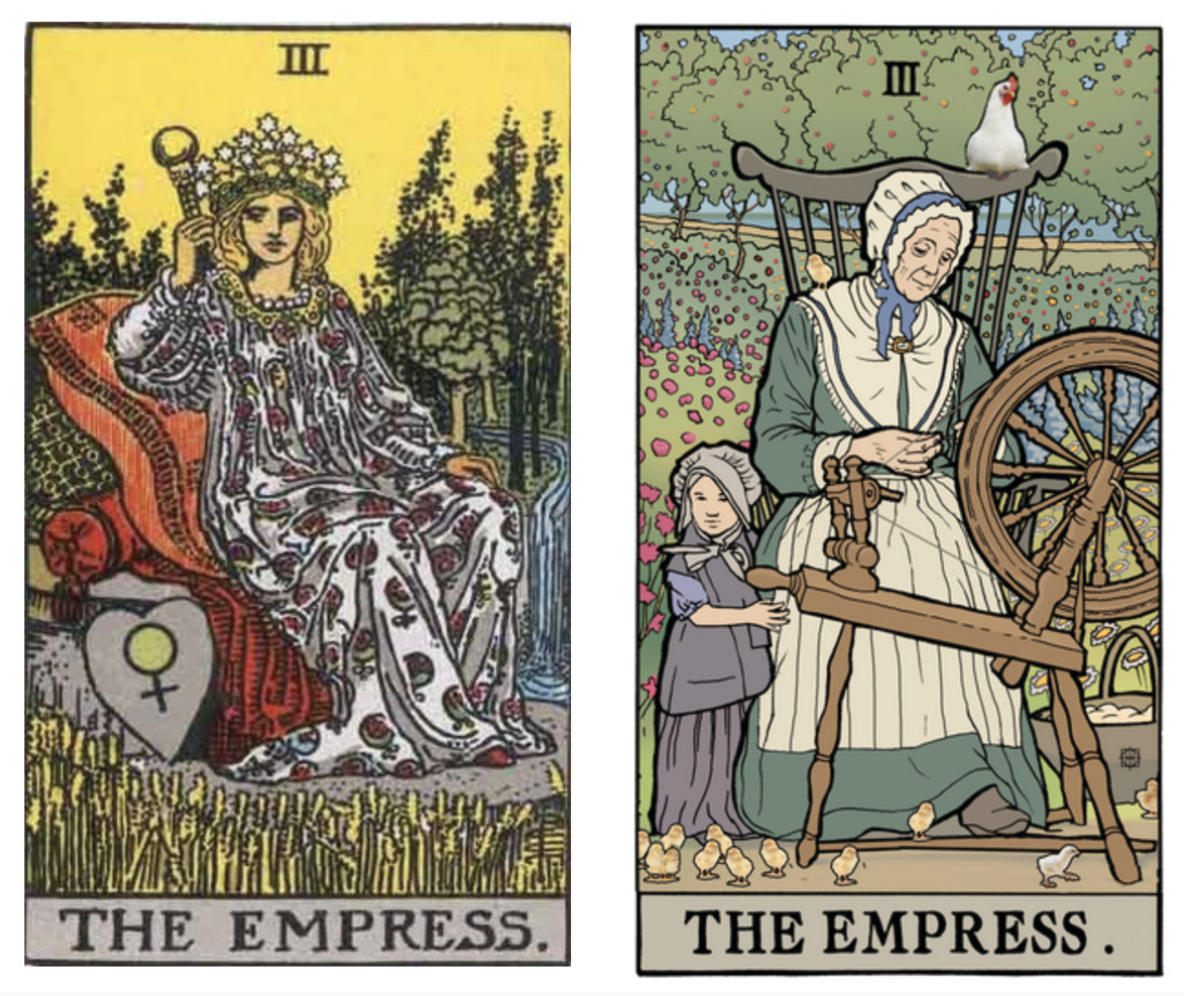 The guidebook explained: “The Tower is also known as the House of God (la maison dieu), and the tower struck by lightning can be seen as an act of God. In the destruction of the tower, what we have constructed as an unassailable stronghold, we experience in a flash the omnipotent forces of the universe.” The description went on to talk about destiny, collapse, ego, and a total undoing of everything held dear.

This card stopped me in my tracks because, strangely, I knew it. I’d never seen it before, never learned anything about it, but I understood it completely in an experiential way that can’t be taught, only lived and remembered. The Tower was the story of my faith ripped to shreds years earlier. The Tower was the way I’d gone into a Mormon temple, la maison dieu, at age 21 with all the certainty in the world, and walked out of that temple a few hours later to a world that didn’t make any sense. The ceremonies in which I’d participated that day, and the covenants I’d made under pressure, may as well have been lightning and fire for all the damage they’d done to the life I was supposed to live.

Reading that guidebook, looking at that card with the flailing people and the crumbling tower ablaze, I appreciated its validation. You’re being dramatic because it was dramatic, those words and figures seemed to say.

That was the first deck I ever owned. I’ve worked with many since, and though each is individual, interpreted through the lens of the artist who creates it, some imagery is so deeply embedded in the soul of this time-honored mystical tool that it shows up in deck after deck. The Tower often features castles and lightning. The Fool often features a young person on a cliff. The Hermit often features an old man with a lantern. These symbols connect us to what Jung called the collective unconscious, made up of the very archetypes on display in the major arcana, inherited from generations past and shared in common with every other person who lives or ever will.

After seeing my own past trauma in The Tower, I was able to circle out and observe other archetypes. Repetitive cycles of separation and reunion with an ex-boyfriend were reflected in The Wheel of Fortune. My quest to claim personal authority inside a high-demand religion was the territory of The Hierophant. Tarot itself felt like The High Priestess, like a way to access intuition outside the constraints of rules and doctrine, and every time I utilize the cards, it’s as though I channel The High Priestess’s energy and make it my own for a brief time.

Tarot isn’t hard to understand; we’re talking about a deck of cards with pictures on them, and the pictures have deeper meanings, and all you have to do is shuffle the deck, draw some cards, and see what you see. The magic isn’t really in these rectangular pieces of glossy cardstock. It’s in us. In our stories.

We can see a line drawing of a castle on fire and say, “I know what that feels like. I’ve been there. I’m still there.” Then we can go deeper. We can unlock inner wisdom, find all the answers to all the questions we’ve been saving up. The major secrets and minor mysteries, the arcana, live there.

Sara K.S. Hanks (CottonwoodTarot.com) is a writer, tarot reader, and co-editor of Where We Must Stand: Ten Years of Feminist Mormon Housewives. She will present “Tarot, Mormonism & The Fool’s Journey’ at this year’s Sunstone Symposium along with Joshua Baird, creator of Mormon Tarot, on August 3. www.sunstonemagazine.com

Sara Hanks and artist Joshua Baird will be at the Sunstone Symposium in Sandy on Saturday, August 3 for a presentation on tarot and Mormonism. Join them for an exploration of The Fool’s Journey, archetypal portals and life-death-rebirth cycle as showcased in early Mormon history. On the same day, Hanks will also present alongside fellow tarot reader Zina Bennion on the subject of post-Mormonism and spiritual reclamation through mystical spirituality. Tickets for both sessions (and many others) can be purchased at sunstone.org.