Save Water, Plant a Penstemon 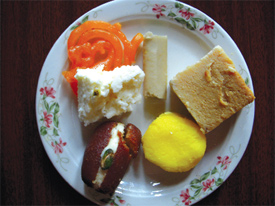 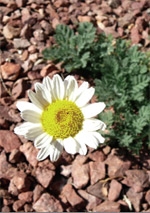 It is early March in Salt Lake and despite a spell of warm weather, city lawns and landscapes still look dormant and grey. But on the Westminster College campus one can see patches of yellow, purple, even green. These lively colors come from a landscape of native plants -Oregon grape, baby mountain mahogany trees, rabbit brush. Today Ty Harrison, professor emeritus of biology and native plant advocate, is giving a tour.

It is early March in Salt Lake and despite a spell of warm weather, city lawns and landscapes still look dormant and grey. But on the Westminster College campus one can see patches of yellow, purple, even green. These lively colors come from a landscape of native plants -Oregon grape, baby mountain mahogany trees, rabbit brush. Today Ty Harrison, professor emeritus of biology and native plant advocate, is giving a tour.

Westminster has taken preliminary steps toward water conservation, starting with their landscape. Some­times hidden or interspersed with sod and large trees are patches of drought-tolerant gardens otherwise known as xeriscape.

The term xeriscape (pronounced like zeer-ih as in Xerox) originated from a movement started by the Denver Water Department in 1978. At the time, Denver faced a serious drought. Their response included a public education campaign, part of which promoted less outdoor water use. Incorporating the Greek word xeros, meaning dry, with “landscape,” they named this idea of water-conserving gardening practice xeriscape.

More than a quarter century later xeriscape has become a term commonly thrown around by the environmentally savvy. The movement’s actual impact on reducing water consumption remains questionable.

Stephanie Duer is the water conservation coordinator for Salt Lake City’s public utilities, but for 25 years prior Duer owned and operated a professional landscaping business. As someone who has been involved both in water conserving policy and landscaping Duer finds the term xeriscape at times counterproductive.

“People use the term to talk about everything from a dry landscape to a landscape with no turf. In reality, none of those are true,” says Duer. “A lot of the xeriscape philosophy and practice has to do with design, maintenance, management; it has very little to do with turf.”

Turf, it seems, is not the nemesis, nor the antithesis, of xeriscaping. Like most things, sod used with thought and moderation is entirely compatible with the concept of a low-water landscape. The company Sandy, Utah-based Bio Grass Sod Farms demonstrates the potential compatibility of sod and xeriscape practices. The company uses science to find a blend of grasses that are adapted to climate of the Inter­mountain West. Some of their seed mixes are actually designed specifically for low water consumption.

But debating what types of vegetation-and even sod-should be planted for xeriscaped yards overlooks the other equally important components of water conservation.

Addressing excessive water use by requiring xeriscapes or enforcing time-of-day ordinances for watering is often more extreme a solution than is needed, says Duer. With a truly efficient watering system in place, time-of-day watering becomes less important, as so little is lost to evaporation. But “truly efficient watering system” is the crux of her concern. To make the most of landscape water, Duer recommends paying closer attention to the duration of a watering cycle. “With our clay soils, eight minutes of watering reaches saturation in the ground. Most everything else becomes run-off.” With these practices put into place, Duer says that even bluegrass can, within moderation, be a water-efficient plant. A well-maintained bluegrass “may only need 12-18 inches a season as opposed to 36-38 which is typically applied.”

Ty Harrison, also a trustworthy voice in the realm of low-water vegetation, doesn’t entirely agree with this assessment. He speaks disdainfully of what he calls the “bluegrass and roses syndrome.” For Harrison, bluegrass is “just eye candy,” perpetuating a standard of beauty that is unsustainable in our arid landscape.

The epitome of water conservation is the naturescape, says Harrison. “Nature­scape uses ecology models for landscaping as opposed to simply horticultural xeriscaping,” Ty says. Whereas xeriscape can use any drought-resistant, low-water use plant such as lavender and the Mexican honeysuckle, naturescape uses exclusively plants native to the region. For Utah, that includes an interesting and colorful array of trees, grasses, bushes and wildflowers.

The bigtooth maple is one such example. This big, beautiful deciduous tree has a classic maple leaf that turns scarlet, crimson and orange in the autumn. It grows naturally in the canyons and foothills surrounding Salt Lake and is available for local landscaping. The native dwarf yucca is medium-sized with the spiky green rosette of leaves. Each summer it grows a stalk with large, white, bell-shaped flowers. Native wildflowers abound in this region: the delicate white sego lily (Utah’s state flower), the bright red firecracker penstemon, the feathery blue Lewis flax. Ty Harrison says by using such low-water natives, we can reclaim the natural beauty of the region.

Bees suddenly appear, buzzing about a plant with tight early spring blooms. “This is bilberry,” Harrison indicates a tall slender plant. “They produce edible berries that the pioneers used to make jam. Delicious. I have made it myself.”

Ending the campus tour through the restored creek hollow to the property’s south, we walk beneath crooked Gambel oak and past dogwood and mountain lover. The running stream, bird calls, insect sounds all seems to transport us from the city and into one of the nearby canyons.

“We are landscaping for urban wildlife-the birds, the insects that feed the birds, and squirrels like that one we hear chattering now,” says Ty. It’s an easy equation: Native plants attract native animals. And in a water-scarce environment, what better plants to use for a low-water garden than those that evolved for this soil, this elevation and this climate?

Why is the new Planned Parenthood clinic in Orem building to LEED standards and why is the clinic in Salt Lake xeriscaping their lawn? Why has the head of that national organization begun to implement a Green Plan throughout their agency, striving to be a more sustainable organization by 2025?

Gabriela Walton, volunteer coordinator for Planned Parenthood in Salt Lake City, explains: “Women are starting their menstrual cycles much earlier. We are seeing an increase in infertility. Women are birthing more children with severe physical deformities.” Walton lists the reproductive problems seen by her organization. “There is an understood link between the environment and these problems-between toxins and the role they play in reproductive health,” says Walton.

Salt Lake’s 9th East Planned Parenthood is partnering with Utah Rivers Council to rip their strip. Volunteer and hobby gardener Renae Widdison is taking full charge of the project. The goal, she says, is to remove the four grass strips to the east and south of the office building. By xeriscaping such a publicly visible area they hope to not only reduce their water consumption but also promote the practice in the community.

The area to be re-landscaped is roughly 4,000 square feet. Widdison is looking at using primarily plants native to Utah-plants that require fewer resources and create a natural habitat for pollinators. Plants have been donated from local stores and organizations including Growing Empire, Trace’s and the Intermoun­tain Native Plant Growers Association.

Planned Parenthood and Utah Rivers Council, represented by Dave Bastian, membership and outreach coordinato, invite the community to lend a hand and participate in the xeriscaping project. The process is a hands-on way for people to learn how to xeriscape a yard. Each step from ripping the sod to composting to planting will be organized into workshops to be held in spring and again in the fall.

Resources for remaking your own parking strip

Xeriscaped yards are popping up from the Avenues to Rose Park, but in such a progressive Western city, the numbers of low-water yards still seem too few. Many residents probably avoid xeriscaping due to anxiety over city ordinances and not knowing which plants to choose.

Luckily, the Utah Rivers Council, a local environmental group dedicated to protecting Utah’s rivers and clean water sources, has developed a helpful program called Rip Your Strip. Log onto the site and you’ll find a multitude of downloads that explain every step of the process. The general packet defines objectives for the project, helping you calculate plot size and completing other important preliminary steps. For instance:

Plant lists: Utah native plants and the noxious weeds to be avoided (many of these are still popular items sold in gardening stores). Do not use plants with thorns or barbs such as cacti.

Legal ordinances: requirements for xeriscape on city property parking strips. The document can be technical and confusing. A handout from the Public Utilities department breaks the ordinance down into a few easy rules. These are the most important components of the ordinance: The parking strip space must contain at least 33% plants (after three years of growth, not immediately after planting). To calculate the percentage in square feet, multiply the strip depth by its length. Multiply that number by 33% to reach the required minimum planting area.

Height requirements: Groundcovers and plants that cover a substantial or continuous amount of space should be no more than 18 inches tall. Individual plants used as accents of specimens may be up to 36 inches tall. Keep taller plants at least 10 feet from the end of the strip.

Looking back to her experience as a landscaper, Stephanie Duer suggests some additional gardening rules:

Be reasonable about turf-you don’t need to eliminate it, just reduce. (However, no turf means no lawn mower.)

Use mulch to keep weeds under control. Lay about a 3-inch layer, and replenish every year to compensate for decomposition. Inexpensive mulch can be bought from the landfill.

Prepare your soil by adding compost before planting. However, be aware that native plants like soils with lower fertility and quick draining.

Most native plants should be planted in the fall rather than the spring.