Save The Tires—Adopt a Goathead Weevil!

Autumn is arguably the best time to cycle in Utah. The oppressive heat of summer backs off, and the ozone pollution hanging heavy over the valley dissipates to a light haze—and by the end of September, even that haze evaporates, leaving behind dazzling blue skies. Unfortunately, now is also the time for the bane of cyclists everywhere: goatheads. The pernicious thorny seeds dropped by the Tribulus terrestris (also known as puncture vine, Mexican/Texas sandbur, caltrop and bullhead) have caused more people to consider ditching cycling than perhaps any other single annoyance. The little burs can litter sidewalks and the sides of roads. I’ve cruised through bad patches and looked down to see dozens of them embedded in my tires. And for people who aren’t accustomed to patching inner tubes on the side of the road, this can be a major frustration. 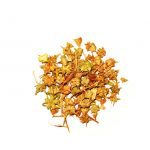 You might be familiar with the goathead bur but have not connected it to the delicate low-growing plant frequently found along sidewalk edges that produces said evil seeds. Tribulus terrestris, native to the Mediterranean, is an annual forb (an herbaceous flowering plant that isn’t a grass). Its most defining feature is the way its vines radiate out from a central hub—usually most apparent when coming up through cracks in the pavement. It can be found most often along roadsides and embankments, where it can completely dominate (I’ve walked through short patches—maybe five or six feet wide—and come out the other side with the soles of my shoes completely covered in goat heads). Every inch or so along the vine you’ll find a tiny, five-petaled yellow or purple flower—until autumn, that is, when those flowers turn into the nasty burs. The plant is considered invasive in the United States. In addition to being the bane of bicyclists, the vines are toxic to grazing animals.

Getting rid of Tribulus terrestris is no easy task. It thrives in disturbed soils and needs next to no supplemental water in the Salt Lake area. For small areas, simply pulling the plant when found is the best approach. For larger areas, especially in the fall, a propane torch weeder works well. For really big infestations, if you want to stay away from chemicals, the best approach is to cover the area in the spring with thick, clear plastic for at least 30 days. Unfortunately, this won’t do much to kill off the seed burs. If you decide that the mechanical approach is too difficult or time-consuming, use a pre-emergent herbicide with Surflan in late winter or early spring. This will kill the goat head burs—but it will also kill any other seeds in the area, and it’s not great for established plants, either, so use cautiously and sparingly.

Lastly—put something in place where the goat head infestation was before. Tribulus terrestris is one of those hardy plants that loves disturbed, dry soils. Once you’ve got something else thriving there, the goat heads will lose out. 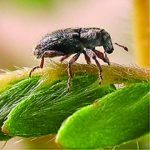 For the low price of just $.50 each, you can do your part to fight the goathead invasion on the Jordan River Parkway, which is probably the biggest source of goathead-related punctures in the valley, especially this time of year! The Jordan River Commission is currently experimenting with this biological way of controlling Tribulus terrestris with two little weevils (Microlarinus Lareynii and Microlarinus lypriformis). These little buggers love goathead vines, and seem to be doing a good job already of reducing the plants on the parkway. This is a safe way of attacking this invasive plant, as the weevils only eat goat head vines, and can’t survive the cold Utah winter.

Sadly, there’s no way to completely prevent punctures, but there’s a lot you can do to dramatically cut down the frequency.

Tire liners: Tire liners are probably the cheapest and easiest way to keep flats at bay. They are just strips of thick plastic (or Kevlar, if you want to spend some money) that you put between the tire and the tube. My favorite are RhinoDillos, but STOP Flats are great, too. Just make sure to pay attention to the chart on the box and get the correct length and width to fit your wheel and tire.

Puncture-resistant tubes: If you want to take flat-protection to the next level, check out thorn-resistant tubes. These are simply inner tubes made thicker. They’re more expensive, and weigh quite a bit more than regular tubes, though. I run them in both my commuter and touring bike, and they make a BIG difference.

Puncture-resistant tires: Unfortunately, tire liners will only stop a percentage of the thorns that come in head-on—they do little to prevent punctures in the sidewall of the tire. The cheaper versions are just thicker tires, but if you spend a little more money you can get tires that actually have Kevlar reinforcement. I have a set of these on my touring bike, and combined with liners and thorn-resistant tubes, I almost never get flats when riding. My favorite brand is Continental.

Get Slimy: Last, and very probably least, is Slime. You can put this goop in the tubes you’ve got now if the valve cores can be removed, and you can also buy pre-Slimed inner tubes. Slime is basically a mixture of glycerin, latex, clay and cellulose fiber. When a tube gets a puncture, the Slime is pushed into the hole by the pressure in the tube, where it sort of hardens and gunks up the works. It’s effective, but messy. Eventually it’ll start to harden, especially if the bike is left sitting for extended periods of time, and the tube will need to be replaced.

Even with all these precautions, eventually you will get a flat at some point. Make sure to carry a puncture repair kit when cycling, along with either a small hand pump or a CO2 inflator. I usually also carry a spare inner tube with me, since they’re cheap and don’t weigh too much, as some flats can’t be patched. Patching an inner tube isn’t difficult, but it does take a little practice to get the tire off and back on the wheel. Most puncture repair kits come with a couple of small plastic tools that make getting the tire off a lot easier.

Roadside repair classes are offered at the Salt Lake Bicycle Collective, the University of Utah and REI, and usually cover not only flat repair, but how to replace a thrown chain, how to replace a broken spoke and various adjustments and tips. And for hardcore do-it-yourselfers, there’s always the internet: How to change an inner tube: tinyurl.com/swaptube; How to patch an inner tube: tinyurl.com/patchtube.

Not all bad: Medicinal uses of puncture vine

With very few exceptions, nothing is all bad, all the time. This holds true for puncture vine, which has been used for centuries in traditional Chinese medicine and Indian Ayurveda to increase libido and treat erectile dysfunction. Western medical science, for the most part, has found little evidence of useful effect. That said, some clinical studies indicate that it might be useful for erectile dysfunction in infertile men, as well as for lowering blood pressure for those with hypertension. Little to no result has been seen for fertile men or those with normal blood pressure. One study found that a 3mg supplementation with whole fruits and water extract of goathead vine resulted a small decrease in total cholesterol.

The most significant side effect found in clinical studies was mild upset stomach—so giving it a shot for any or all of these conditions is unlikely to cause any harm. One small note, however: Lab tests with animals have linked use of tribulus to problems in fetal development. The evidence is scant and doesn’t necessarily translate to humans, but regardless, pregnant women shouldn’t eat it.

Pax is a longtime CATALYST staffer currently living in Albuquerque. He works as evaluation faculty at Western Governors University, and teaches magazine writing online for the University of Utah’s Communication department. He and his wife Adele Flail blog at www. halophile.net.

This article was originally published on September 1, 2016.