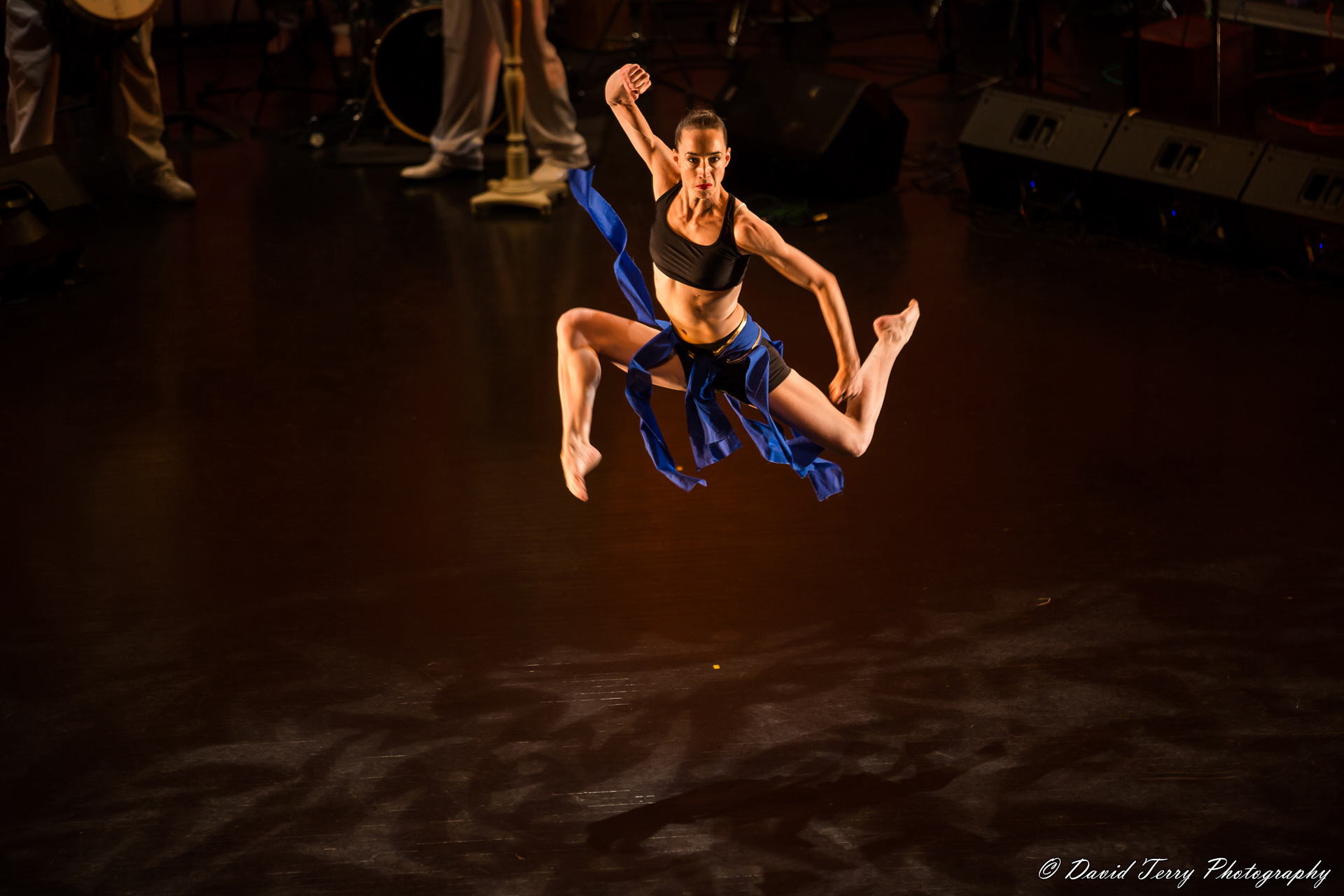 Beneath the fire, glitter and bikinis, the Afro-Brazilian and Afro-Cuban dance culture of the Orixa tradition holds deep spiritual significance.

The Candomblé Priestess tossed the cowrie shells on the table in front of Lorin Hansen, Artistic Director of Samba Fogo, on her visit to Bahia, Brazil, in 2009. A significant rite of passage for anyone studying the Orixa tradition, the shells formation, similar to I-Ching, would reveal Hansen’s personal Orixa, her spiritual guides.

Orixa are the demi-gods in the Yoruba religion, an ancient religion originating in Africa. Brought over through the Atlantic slave trade, the religion was passed on through oral tradition, however morphed and blended into each community it landed in. Candomblé is the practice of the religion in Brazil, Santeria in Cuba, Voodoo in Haiti, and so on. Ancestor worship, and prayer to the Orixa, through music and dance are critical elements of the practice.

Each Orixa, or deity represent different facets of nature. “It’s a way of seeing ourselves in nature,” says Hansen, “and a form of self awareness, and self forgiveness.”

But Hansens’ guide revealed to her by the priestess that day surprised her: Oxossi (pronounced Oshosi), king of the forest. Oxossi represents the hunter who goes out and brings back the hunt for the community to share, as Hansen and her husband Mason Aeschbacher, Musical Director of Samba Fogo have been gathering information from Brazil to bring back to the Samba Fogo community and Salt Lake. However, Hansen was certain that one of her Orixa would include one of the two gods that represents fire. 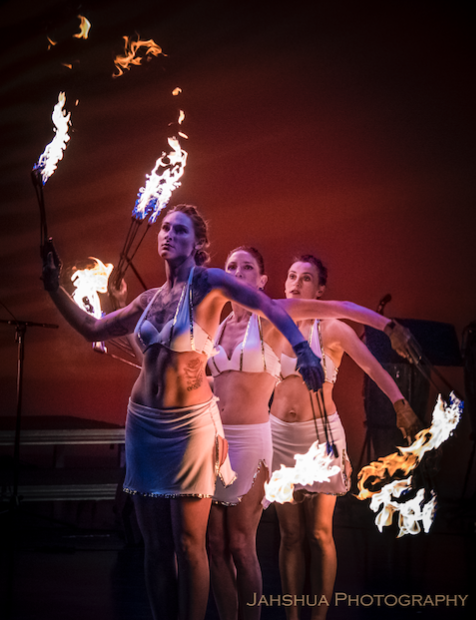 “Could we let our inner sight sink down deep into the recesses of our own hearts, we should, I think, see a tiny spiral flame. This flame is a spark of the Divine Fire, the universal life, within all nature, animate and inanimate.” -Hattie Brown, 1899. This quote is the inspiration behind Samba Fogo’s 2015 performance, Fogo Divino, or Divine Fire.

The upcoming performance by Samba Fogo, ‘CHAMA,’ or flame, is their largest collaboration in a performance yet. With a cast of 15 dancers, 18 drummers performing, there will also be four different fire pieces in the show (poi, fire fingers, fans, staff, double staff, fire eating and new surprise fire toy). The story weaves in Orixa mythology, and will incorporate Afro-Cuban, Afro-Brazilian music and dance with diverse elements including opera, a horn line, and a string quartet. Guest singers Kristin Jensen and tenor Jerry Maymi will join Samba Fogo vocalists Solange Gomes and George Brown, who hail from São Paulo and Brasilia, Brazil. George Brown’s original song “Samba Fogo” will also premier in the show, with both English and Portugese lyrics, the chorus being, “The fire catches. It is contagious. It is happiness. It is euphoria. It is passion.”

The most remarkable element of this show, however, is that Samba Fogo, now in their 15th year as a group, will welcome their two long time teachers and collaborators, master dancer, choreographer and instructor, Rosangela Silvestre, and drummer, recording artist, and music director, Mark Lamson on stage with them. “This is the first time in entire history we will be bringing two teachers in music and dance for the show. We usually bring them in for training, but having them in the show is a new and different challenge for us. These are two masters in their fields who we really look up to,” says Hansen. 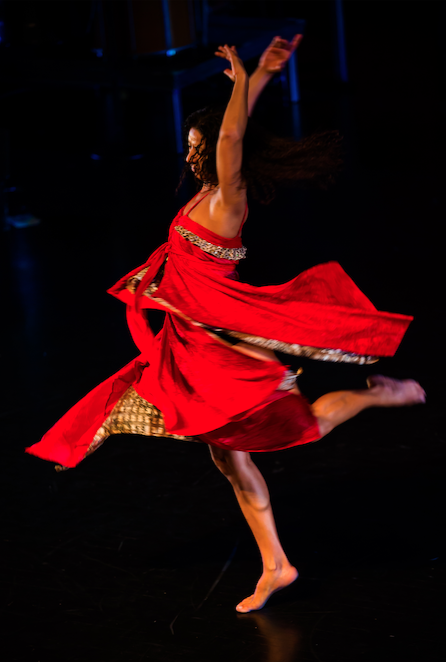 Rosangela Silvestre, native of Bahia, Brazil, founder of the Silvestre Dance Technique, will take the stage for a special solo dance performance in CHAMA. Silvestre has been a key influence for Samba Fogo. She also spreads the wisdom of the Orixa tradition and the spirit of her dance worldwide. Her captivating stage presence and masterful technique has taken her to perform all over, Salt Lake City is amidst a lineup of performances in London, Montreal, Geneva, Zurich, Paris and Tokyo.

She’s studied dance in Brazil, India, Egypt, Senegal and Cuba, and has a trained in techniques from Martha Graham, classic ballet, Dunham and Limon, to name a few. The Silvestre Dance Technique combines Orixa inspired movement and modern dance. “Dance translates what I cannot say in words. Dance connects me with the Universe. Dance connects me with you.”

Through the bond of student and teacher, dance connected Hansen and Silvestre so many years ago. The chance to see them dance on the same stage together will be a moment to behold. It was, after all, Silvestre’s mother, who was the priestess who revealed Hansen’s personal Orixa to her with the toss of the Cowrie shells in 2009.

Mostly choreographing for elite dance companies and teaching students of all levels around the world, Silvestre has been teaching a three-part dance residency for Samba Fogo at the SLC Arts Hub. She taught Monday and Tuesday, April 24, 25 and will also be offering an Orixa Dance Movement class at 11am, the morning of Saturday, April 29, before their last night of CHAMA. This class is open to all levels of experience. “We discover that dance has no level. We are dancing all the time in life, and every movement from any technique of dance. It is all dancing. We all can move!” says Silvestre. 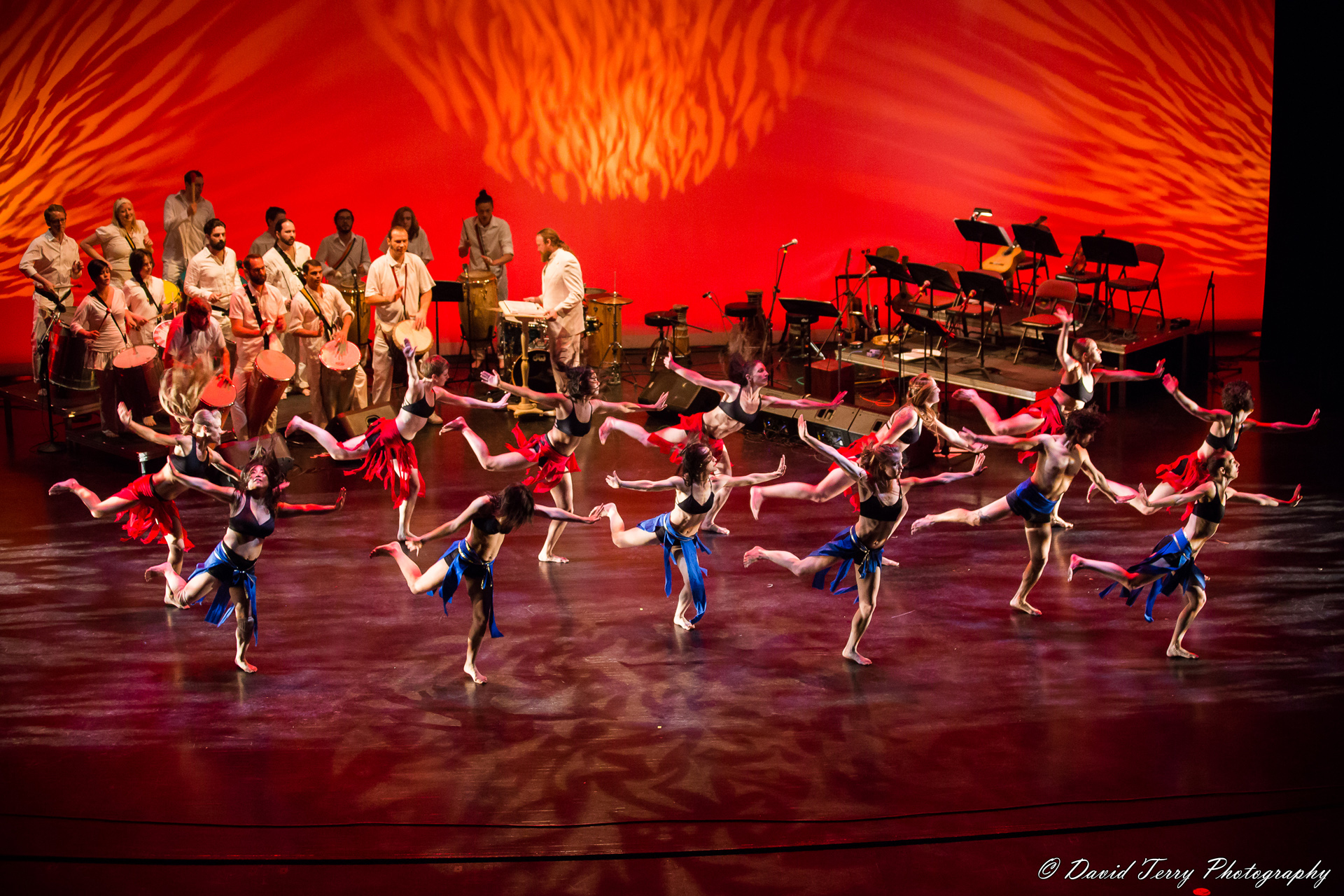 Silvestre was also one of the main dancers to take the stage with Mark Lamson, guest drummer, for his unprecedented ’96 album in collaboration with Michael Shapiro, Bata Ketu. “She was the main dancer of getting that project on stage,” says Lamson. The significance of his album is palpable, and is registered by the Smithsonian Institute. It bridges the gap between Afro-Brazilian and Afro-Cuban music. “At the time no one had done this,” says Lamson of the album. Through various artistic interplay between Brazilian, African, and Cuban lyrics, rhythms, and dieties, Lamson knit pieces of the three cultures back together in one album. Bata is the name of the kind of drum played for Afro-Cuban music, and Ketu, is the name of the town in Nigeria where Yoruba people originated.

While the rhythms and instruments can vary between Afro-Brazilian and Afro-Cuban dance and music, the Orixa characters unite the two. The Orixa also have uncanny similarities to Catholic saints, which were part of the reason why the Orixa tradition survived slavery. The African slaves were forced to worship in Catholic-dominated Latin America, yet they were able to draw connections between their deities and the Catholic saints. “Quite literally, the African slaves hid their religious practice underneath Catholicism by burying their Orixa replicate dolls underneath crosses they had stuck in that ground. They would be simultaneously praying to both Catholic saints and Orixas,” says Hansen.

Through syncretism, the tradition survived in Latin American countries. Where as in the U.S., Protestantism was the dominant religion, which does not have the same pantheon of saints as Catholicism. Slaveholders in the U.S. did not allow slaves to keep up their African traditions, nor did the slaves have an easy religious substitute to mask their deities behind. The culture came out in different ways. “You don’t have the remnants of the language, the drumming, but you have jazz and blues instead,” says Lamson who has dedicated his life to studying the connection between music in Africa, Brazil and Cuba.

Lamson lives in San Diego, is a professional musician, an adjunct professor at San Diego State University, and plays drums for Candomblé ceremonies across the region. “It’s not an organized religion, it’s a practice. Its inclusive. Not exclusive. You can go to Catholic church in the morning, and go to Candomblé drumming at night.”

Similar to the dual-practicing African slaves in Cuba and Brazil, Lamson seems to live a bit of a dual life himself. On his website, he presents as a highly business-oriented, professional musician who has played with acts including Sergio Mendes and the Los Angeles Philharmonic at the Hollywood Bowl, to planning music for events by Fortune 500 companies. Yet through our phone conversation, he easily tells me about his deeply spiritual experiences of drumming for Candomblé ceremonies in which people go into trances. “Seeing what this music provides is a sacred space for the possibility in trance. When you see someone in trance, it’s an altered state of consciousness, and it’s very powerful. It produces communication with the other side of the veil.” 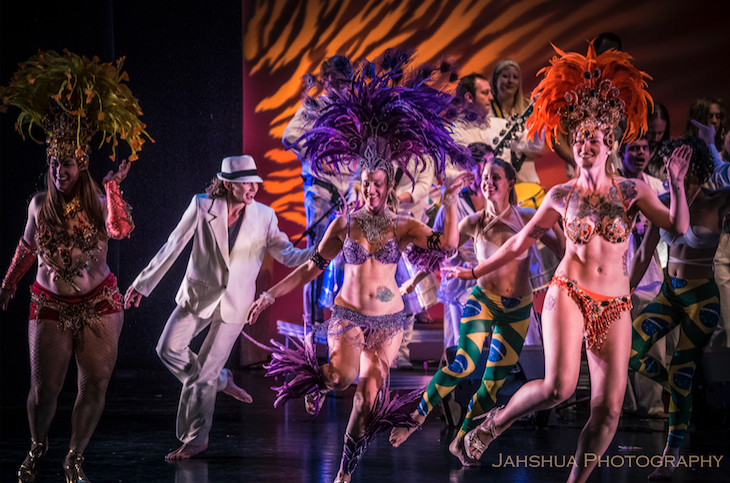 Hansen echoed this theme of duality and connection with the non-living in the Orixa tradition, “On one hand, you see a dancer shaking it in a bikini,” noting on the showiness of the dance tradition, “Yet we (Samba Fogo) fire dance, for our ancestors and loved ones who have passed.”

Silvestre says, “It makes our ancestors happy when we dance.”

During last year’s spring show, Hansen’s sister was suffering from a brain tumor, and passed away shortly after the show. “Last year, I was dancing to heal her. This year, I will be dancing to remember her.”

Beyond the show’s dynamic layered traditions, instruments, the depth of the multiple meanings and spiritual connections is unfathomable. The word Chama, even has dual meanings. Flame is one meaning, and the verb ‘to call’ is yet another. Each number of the performance will be sung, played and danced to ‘call’ out specific Orixa.

In the words of Samba Fogo’s vocalist, George Brown, “The fire catches. It is contagious. It is happiness. It is euphoria. It is passion.”

More information and tickets for the show here.

This article was originally published on April 27, 2017.