Then more than now (but nobody’s bragging.) Hear from some folks who remember when the snow was black. 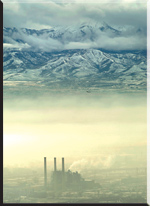 When winter storms shiver snow over the Wasatch Front and clouds peel off the lapis skies, people from Payson to Tremonton enjoy picturesque vistas that inspire accord with Brigham Young’s opinion: This really is the place. But when high-pressure fronts park dry air masses over the region, an atmospheric inversion creates prime conditions for a mucky haze to soup into the Wasatch Front, haze so thick it gives the sun a rusty pallor and so toxic as to be a certifiable health hazard. When this occurs, you may want to be any other place, somewhere you can breathe a deep, clean breath and rejoice in a view of a naturally blue sky.

When winter storms shiver snow over the Wasatch Front and clouds peel off the lapis skies, people from Payson to Tremonton enjoy picturesque vistas that inspire accord with Brigham Young’s opinion: This really is the place. But when high-pressure fronts park dry air masses over the region, an atmospheric inversion creates prime conditions for a mucky haze to soup into the Wasatch Front, haze so thick it gives the sun a rusty pallor and so toxic as to be a certifiable health hazard. When this occurs, you may want to be any other place, somewhere you can breathe a deep, clean breath and rejoice in a view of a naturally blue sky.

The extended spell of smoggy skies that couch-potatoed over the area mid-December was a dependable small talk topic in grocery store lines and among acquaintances at holiday parties. Who didn’t lament being unable to see from one side of the valley to the other? Or even half a mile in any direction? In these midwinter days, sunshine is at a premium, and to the dismay of many, any potential sunshine was besmirched by smog for much of the past month. But, according to some longtime residents, the pollution caused by inversion isn’t as bad now as it was in decades past.

In the early 1900s, coal—burned for cooking and heat in homes, burned to power train traffic and burned for countless uses in manufacturing—was the primary source of pollution across the U.S., and that was certainly true of Utah at the time. 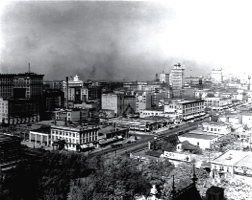 “It was really awful in the ’40s,” recalls 72-year-old cab driver Rob Sharp, a Salt Lake native who has spent most of his life here. He remembers a time when residents could burn fallen leaves and most homes were heated by coal stoves. Instead of using salt on icy, snowy roads, Sharp says people sprinkled “clinkers,” the refuse of spent coal, onto the streets. As he recollects, the air quality in the area progressively improved when natural gas furnaces began replacing coal stoves in the ’50s and ’60s.

Pamela O’Mara’s grandmother, Hortense Hodson, grew up on South Temple, which was named Brigham St. at the turn of the 20th century. “She told me that sometimes the air in Salt Lake City would get so bad she couldn’t even see across the street,” O’Mara says.

As 79-year-old Don Jex tells it, smoke was constantly belching from smelter towers in Murray and Sandy, and smoke poured out of the Geneva Steel mill in Utah Valley. He’s not alone in blaming the area’s historically bad air on noxious industrial emissions, as late as the 1970s.

{quotes} Vik Arnold, from Farmington, remembers when Miller Floral operated a greenhouse there. “They would fire up the coal-powered heating plant in the winter; their big smokestack would spew out enough stinky, black smoke to turn day into night and cover our cars with soot,” Arnold says. {/quotes} Eve Leonard remembers holding her breath driving past the refineries on Beck Street.

“Before Kennecott made their [smokestack] higher, the air quality here was much worse,” says Diane Olson, who writes CATALYST’s “Urban Almanac” column. “Grass literally would not grow in Magna and the other towns around Kenne­cott, and the Oquirrh Mountains were bare of trees and other foliage.”

Many people referred to sunsets over the Oquirrh’s as the “Colors by Kennecott,” a nod to the effects of pollution on diffuse sunlight at dusk. Before the Clean Air Act Extension in 1970, Kennecott Utah Copper Corporation relied on several small smokestacks to disperse its pollution. The smelting process of separating sulfur from copper produces thousands of tons of sulfur dioxide gas, which has been linked to a variety of adverse respiratory health conditions. Kennecott built a new, taller smokestack in 1974, and it claims that the smelter it installed in 1995 captures 99.9% of sulfur dioxide emissions.

Scott Perry, an artist in Salt Lake City, was in junior high back in the mid-’70s. He remembers the skies as bluer during the day, crisper, and darker at night. “None of this gunk that we have now,” Perry says. “Also—this memory may be due to my short, stumpy, junior high legs—but it also seems that the snow was much deeper and stayed around much longer than it does now.”

As a student at the University of Utah in 1977, Jane Broadhead remembers an extended and despairing period of mucky pollution in January of that year. “I recall standing at the bottom of the flagpole on campus, looking up and not being able to see the flag because of the smog. I’m sure there was fog as well as particulates, but it was nasty,” says Broadhead.

Despite Utah’s characteristically dry air, fog can and does form in the region when a cap of warm air traps dense, moist, cold air near the Earth’s surface. That increase in atmospheric temperature with altitude creates a temperature inversion and shuts down the normally fluid circulation of hot and cold air masses that blows away toxicants emitted by automobiles, power plants and industrial facilities, allowing those pollutants to coagulate in the valley.

Fog makes things worse, concentrating the more-dangerous PM2.5 particulates, which, according to the Utah Department of Air Quality, account for most of Utah’s wintertime particulate pollution.

Particulates are one of six pollutants monitored by the Environ­men­tal Protection Agency. PM2.5 particulates are a dangerous brew of sulfate and nitrate acids, organic chemicals, metals, soil or dust, all of which are 2.5 micrometers in diameter and smaller—orders of magnitude smaller than a human hair. These tiny particles penetrate deep into the lungs and can cause or worsen respiratory diseases. The EPA has linked PM2.5 to a number of serious health problems, including heart and lung diseases, stroke and premature death.

{quotes align=right} A 2009 report by the American Lung Association ranks Salt Lake City sixth and Logan seventh on a list of the most polluted cities in the U.S. by short-term particle pollution. Pittsburgh tops that list. {/quotes}

On Christmas Eve and Christmas day, another temperature inversion was established along the Wasatch Front, but the dry air that followed on the heels of the recent snow storm wasn’t conducive to fog. All that brown haze hanging over the valley was pollution.

In Diane Olson’s climatology class at Westminster College in 1981, she was assigned the task of predicting the weather daily. “For the entire month of January, it was the same—an inversion. No sun, hard to breathe, nasty cold,” she recalls.

Barbara Palmer moved to Utah in 1979, and she has a distinct memory of a smoggy day in 1986 that very nearly convinced her to hightail it back to the East Coast with her young family.

“I was walking to a department store in downtown Salt Lake with my two sons,” she recalls. “And I’ll never forget, it was three in the afternoon and the sky was as gray as gray could be. You could see the sun wanted to be there in the sky, but you couldn’t really tell it was the sun and not the moon. It was something like being on Mars, and it was nothing like anything I had ever seen in my entire life. I remember thinking, what am I doing living here?”

Longtime Salt Lake City resident Marge Bowen recollects the winter of ’82-’83. An awful brown haze rolled into the valley sometime in December and did not lift for three solid months, she says, and the temperatures were downright arctic. “Everybody was sick. Everybody was cranky.” After two months trapped beneath the muck, Bowen and her husband decided this was not the place. They escaped the valley in February and fled to Mexico.

It’s too early to say how long we’ll will have to live with the present spell of inversion-induced smog, but it would take extraordinarily languid weather for it to hang around for months. And even though it might call our valley home for a time, perhaps there’s some solace in knowing it’s not as bad as it could be. Or as it was.

Thanks to all our Facebook and listserv friends who responded to our call for comments.

Editorial disclaimer: Barbara Palmer, cited in this article, is related to the author.

This article was originally published on December 31, 2009.