In this issue, CATALYST focuses on the candidacies of Dave Buhler and Nancy Saxton.
by Zach Abend 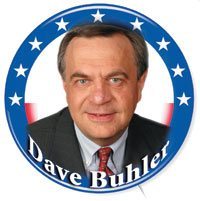 Dave Buhler won't be giving interviews to The Nation or debating Sean Hannity if he is elected mayor of Salt Lake City. "I wouldn't be as focused [as Rocky Anderson is] on getting national attention," he said. But simply winning the election would garner him notice because Salt Lake has favored Democratic mayors recently and Buhler is a Republican.

A former state senator and current two-term city councilman for District 6, Buhler, who is 49, would use the bully pulpit of the mayor's office to put the school system at the forefront. Although the city doesn't control it, Buhler would work closely with the Utah State Board of Education to make public education a city issue. "There is a connection between good schools and good neighborhoods," he said.

Local businesses would receive strong support from Buhler, including loans. "If we don't help them, no one will," he said. "We usually provide gap financing." In a recent survey of Salt Lake City mayoral candidates by the Vest Pocket Business Coalition, Buhler also said he supported making zoning changes to protect the character of certain neighborhoods, the use of special improvement districts to upgrade infrastructure in areas like 9th and 9th, and the creation of a "procurement outreach program, to make local businesses aware of opportunities to provide goods and services to city government."

Big box stores are a fact of life and Buhler says it's best to put them in places that can handle the traffic. "Big boxes don't need to be subsidized but they should be treated fairly," Buhler said. "They provide cheap goods for shoppers, which is a good thing."

Stewardship of the environment would be another priority for Buhler. He would work with the city council to create an office of sustainability that would report directly to the mayor. This would centralize the city's conservation efforts and personnel, which he says are currently scattered among several departments. Buhler proposed free parking for downtown commuters who drive alternative fuel vehicles and endorsed increasing water rates in the summer to promote water preservation.

Buhler's willingness to compromise has given him an ally in Democratic City Councilwoman Jill Remington Love of District 5. Love, who will be helping run Buhler's campaign, calls herself  "a diehard Democrat," and says Buhler is the first Republican she has publicly supported. After spending the last five years working with him on the council, Love believes Buhler is simply the best candidate for the job because he is "open, accessible and will listen."

Notwithstanding his party affiliation, Buhler's ability to get things done, his persistence and the more than 20 years he has spent in state and local government make him the dark horse candidate to watch in this election. 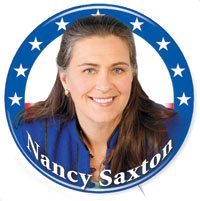 Nancy Saxton recognizes that viable neighborhoods are what define a city. "There is a magic to neighborhoods, being able to provide services within walking distance," she said. "We cannot continue to live as we have with cars being pivotal parts of our lives. We need to start gearing our development to walkable communities."

A Democrat and two-term city councilwoman for District 4, Saxton would make strengthening neighborhoods her priority if she were elected mayor of Salt Lake City. A key ingredient of neighborhoods is local business. "I do believe that small businesses are what float the economy and give us stability in our way of life in the United States," she said.

In a recent survey of Salt Lake City mayoral candidates by the Vest Pocket Business Coalition, Saxton said she would bring together small business coalitions, small business owners and municipal government to create an across-the-board plan for small business growth in Salt Lake City. She would lower entry barriers to small businesses by reducing the bond levels required to contract with the city and reward contractors who pay their employees a living wage. She would also appoint an ombudsman to advocate on behalf of local businesses during master planning processes and zoning changes.

As a former small business owner, Saxton, who is 54, said one of the challenges she had faced was providing health care for her employees. As mayor, she would have the city provide small businesses and their employees with affordable health care choices. (It's estimated that between 300,000 and 420,000 Utahns do not have health insurance.) Saxton would also direct the Salt Lake City Redevelopment Agency (RDA) to increase the amount of money it loans and grants small businesses owners.

The ability to travel easily from neighborhood to neighborhood using a rapid and reliable mass transit system is another defining factor of city life. "Mass transit is a greater priority than expanding freeways," Saxton said. She would increase bus service to reflect how Salt Lake residents use the system: to get goods and services throughout the day, regardless whether it's rush hour or not. Saxton worries that the proposed route eliminations and changes to the bus system will convert it to a commuter rail model with few stops between destinations and long waits for buses, which is not conducive to city living.

Environmental issues rank high for Saxton. "All it takes is for the Earth to warm two degrees for life as we know it in Utah to change," she said, referring to the snow pack. Recycling would be mandatory for Salt Lake residents and businesses in a Saxton administration, and the master plan for the northwest quadrant would be implemented in order to preserve the delicate ecosystem that area encompasses.

Saxton's imposing presence, her obvious love for pressing the flesh and her experience on the city council make her an able politician. Her challenge will be raising enough money to keep her candidacy viable in a field crowded with (mostly Democratic) contenders.