The holidays, for me, are best defined by the season’s many libations. Egg nog. Wassail. Hot apple cider with rum. Dark clove and nutmeg stouts. Christmas punch. New Year’s champagne. But, as the years add up, there isn’t as much in my cup as there once was. The memory of hangovers past keeps me more on the sober side. This had me wondering recently: Is it just me or do hangovers really get worse as we get older? Or, after so much practice, are we simply less willing to face the inevitable outcome a night of drinking offers?

A late bloomer, my drinking life started more slowly than for most. My entire first semester of college I refused any drink sent my way. However, by the end of four collegiate years I could put back as much as the next co-ed.

My next move to Wyoming developed my taste for whiskey—in a state where pours are up to the discretion of the bar tender and usually grace the brim of the glass. Many of the people I associated with could hit the bottle pretty hard, and we all fought through some pretty rough mornings, sometimes showing up to work with heads hung and feet dragging. So it was a complete shock to me when, one winter night, I invited a coworker to join me for a drink at the neighborhood bar and he declined. I was 24. He had just turned 26. 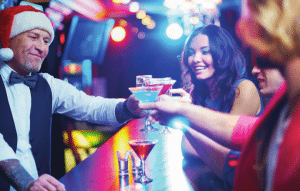 It starts hitting you differently when you turn 25, he told me. I don’t want to be hung over in the morning.

Despite there actually being an international group of researchers who dedicate their work to studying the alcohol hangover (the Alcohol Hangover Research Group) very little conclusive scientific evidence supports my friend’s suggestion that age affects hangovers. But science has come up with some pretty convincing theories.

The simplest explanation for the hangover hurt is dehydration. Alcohol acts as a diuretic, increasing urine production, and it takes some dedication and training to remember to have a glass of water between every drink. The body’s reaction to water deficiency could definitely explain some of the feelings of dizziness and lightheadedness associated with a hangover.

Another explanation has to do with they way our bodies digest alcohol. A shot of whiskey, bottle of beer, or glass of wine breaks down into two components once it enters the liver: Ethanol is metabolized first; then, 10 hours later, about the time we start feeling the effects of a hangover, our body starts in on the methanol. Methanol breaks down to create acetaldehyde, estimated to be 10 to 30 times as toxic as alcohol itself. The body’s battle with acetaldehyde may account for physical effects such as skin flushing, sweating, nausea and vomiting.

And, according to the South Korean toxicology researcher Young Chul Kim, processing acetaldehyde may get more difficult as we age.

Acetaldehyde is detoxified in the liver by the antioxidant glutathione, but in a study with aging rats, Kim found that livers in older animals were less able to generate glutathione, slowing cell recovery time.

Drinking in particular can trigger the body to produce high levels of cytokines, molecules that the immune system uses for signaling stress. These little chemicals can kick start the necessary response to fight, say, the flu.

So a heavy cytokine release as a result of drinking might make you feel like you’re fighting an infection—muscle aches, fatigue, headache and nausea. But since your immune system response isn’t working as well as it used to, that hangover feels a whole lot worse.

I was pretty sure my co-worker’s cop out on a night of drinking was just an excuse to stay home and watch bad television, but his words stayed with me and as I turned 25 I, too, started to notice changes. Maybe it was just the power of suggestion, but my hangovers felt worse. Now into my 30s it’s rare for me to enjoy a full pour of whiskey, wary of what I’ll have to deal with the next day, and I find myself giving the same line to friends as they pull around that mid-20s corner.

Not everyone agrees that old age makes for worse hangovers. Researchers from the University of Southern Den­mark found in a nationwide online health survey—they looked at 51,000 responses from a cross section of adults ages 18-94 —that older subjects generally reported lighter hangovers despite the same amount of consumption.

How could this possibly be when all the research seems to point in the opposite direction? For one, the numbers might be skewed by what kind of person is still drinking in their golden years. Around 20% of lucky drinkers have bodies that will never acutely suffer the effects of a hangover. These are likely the people who are left drinking later in life, giving the effect that aging weakens hangovers.

But, in reality, the adults surveyed probably just learned to drink smarter. People over 30, the researchers surmised, likely took more preventive action (see accompanying story) and they probably weren’t binge drinking as much as their younger peers, spreading their consumption out over the week instead of putting it back, as so many of us once did, in a single night.

So maybe this holiday season, I’ll just remember to drink smarter, slower, and to reach for a glass of water every once in a while.

This article was originally published on December 1, 2015.