Every summer, Uncle Sam calls me into the West’s forests to fight wildfires for a six months. This year, my job takes me away from my family of fowl during the weekdays. But every Friday, when I roll back into the SLC and pull up to our urban homestead, I start squawking and peeping to try and raise the birds.

They always peep back and the whole flock—chickens, geese, ducks and all—comes running up to the backyard gate.

I hear their frenzied soundings and brace for all the changes I’ll find. The little peepers change as quickly as the summers ‘daylight lengthens in early June. They grow bigger and more beautiful with every passing week, but remain just as talkative and poopy as ever.

One of the most notable changes for us is not having the brooder inside anymore. Last week we moved it outside for cleaning and never moved it back in. There were so many problems with it inside as the goose and duck and chicks got bigger. Goose was getting big enough to reach the heat lamp and began playing with it, grabbing it in her beak and banging it against the chicken wire. We noticed the same behavior in the first flock that arrived when they reached the same age and size.

Most bothersome was that the birds constantly spilled their food and water. The bottom of the feeder became saturated with dirty brown water and we noticed a nasty spring seeping from beneath the brooder across the kitchen floor. Even with a towel placed permanently by the cage ready to wipe up the small stream I worried about the floor warping from the moisture. 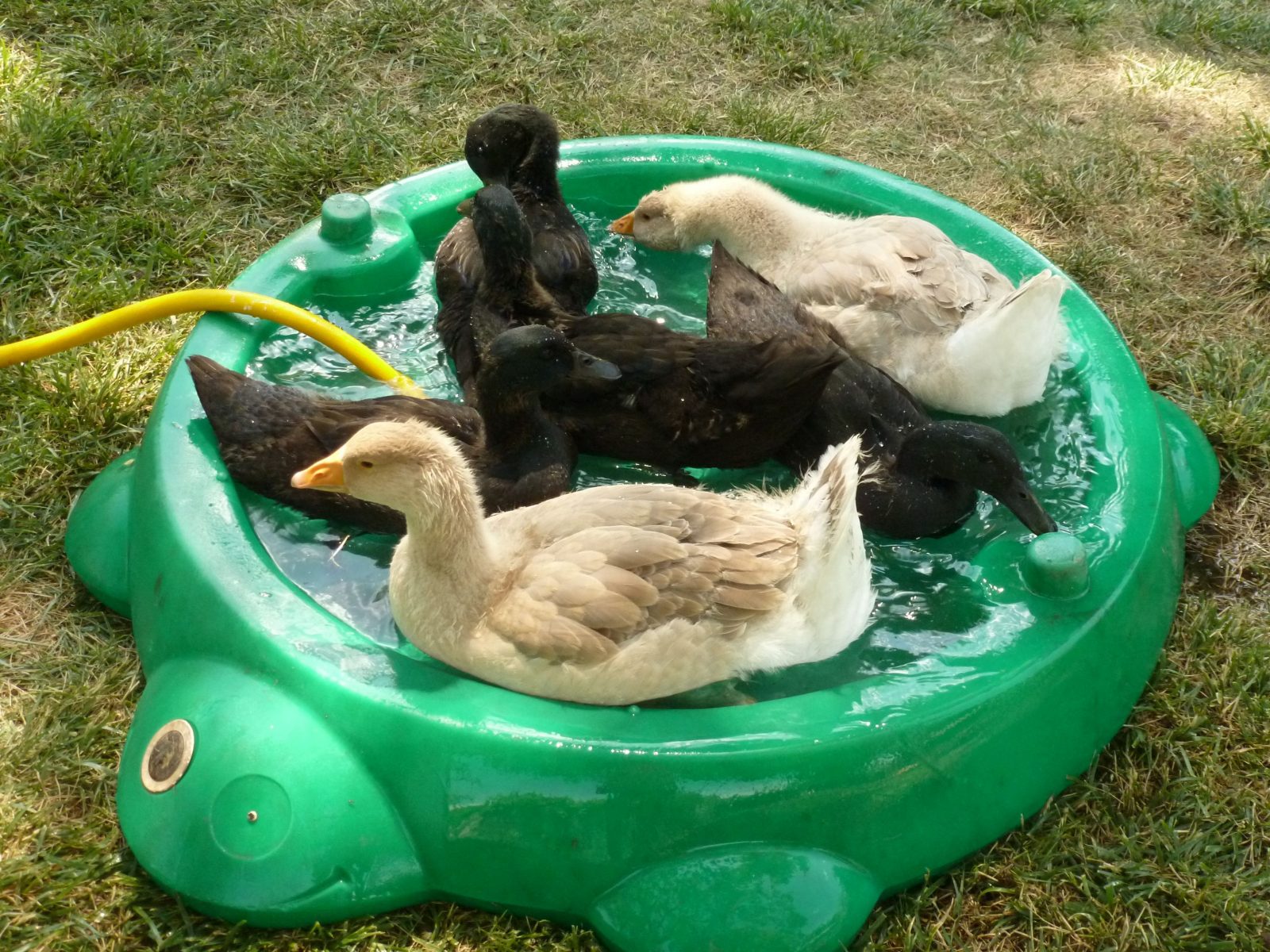 On top of that, the soaked bedding and feed imbued our kitchen with the rank stench of sour mash day and night. Outside, we placed the brooder up on two cinderblocks to get airflow underneath and set the box in a spot equally shady and sunny. The second batch of babies is not old enough for full release but they are just fine outside. We keep their cage covered up at night for warmth, building a makeshift fort around the brooder with large plywood flats. The kitchen seems oddly quiet and dark now with the babies outside.

On this Saturday morning I am sitting in the shade in my backyard. The animals are grazing from one grassy corner to another. Goose and Cricket (our names for the youngest goose and duck, who came a month later than the others) are outside wandering as well. They are inseparable. If Goose gets out of sight, Cricket sounds the distress alarm till he finds her. Cricket is starting to get standoffish, normal behavior as ducks get older. Goose on the other hand has solidly imprinted on us. She loves being held and toddles across the lawn after us, her wings outspread for balance. When the older ducks and geese come around, little Goose runs to our feet for protection.

We were concerned that getting Goose and Cricket so much later than the others would harm their chances of being accepted into the group. Especially given how the two have bonded and it seems we may be right. The older flock is physically twice the size of the younger peepers. The ducks appear to be at their full size, about six to eight pounds. The geese are about half their full size, but their wings are completely formed and all of the birds have grown in their feathers. They even seem to be pairing up.

When the older flock sees little Goose and Cricket probing at the water in the kiddie pool or packing at a plot of tender grass, they act aggressively instead of curious, flattening their necks, extending their heads and going in for a peck on the back.

Ben has noticed a curious aggressive behavior the geese and ducks display. If they don’t particularly approve of a given bird, they move in slowly and their necks begin to shiver, tight, minute vibrations shimmering what downy feather remains on their long necks. Ben surmises – with little scientific evidence and a lot of inexpert conjecture – that the neck shivering might vibrate the air around the bird, delivering the get-the-hell-outta-my-way-before-you-really-piss-me-off message. We are hoping that as Goose and Cricket mature, and as we continue to socialize the two groups, they will bond together.

This discussion inevitably brings us back to the problem of whom to cull and whom to keep for breeding. According to the books, the older birds are reaching the age for meat harvesting. To maximize your dollar, and for easier, cleaner plucking, the birds should be harvested when all their adult feathers are in and before they start molting again. For ducks, the first window opens around seven to ten weeks. That’s about now for our flock. 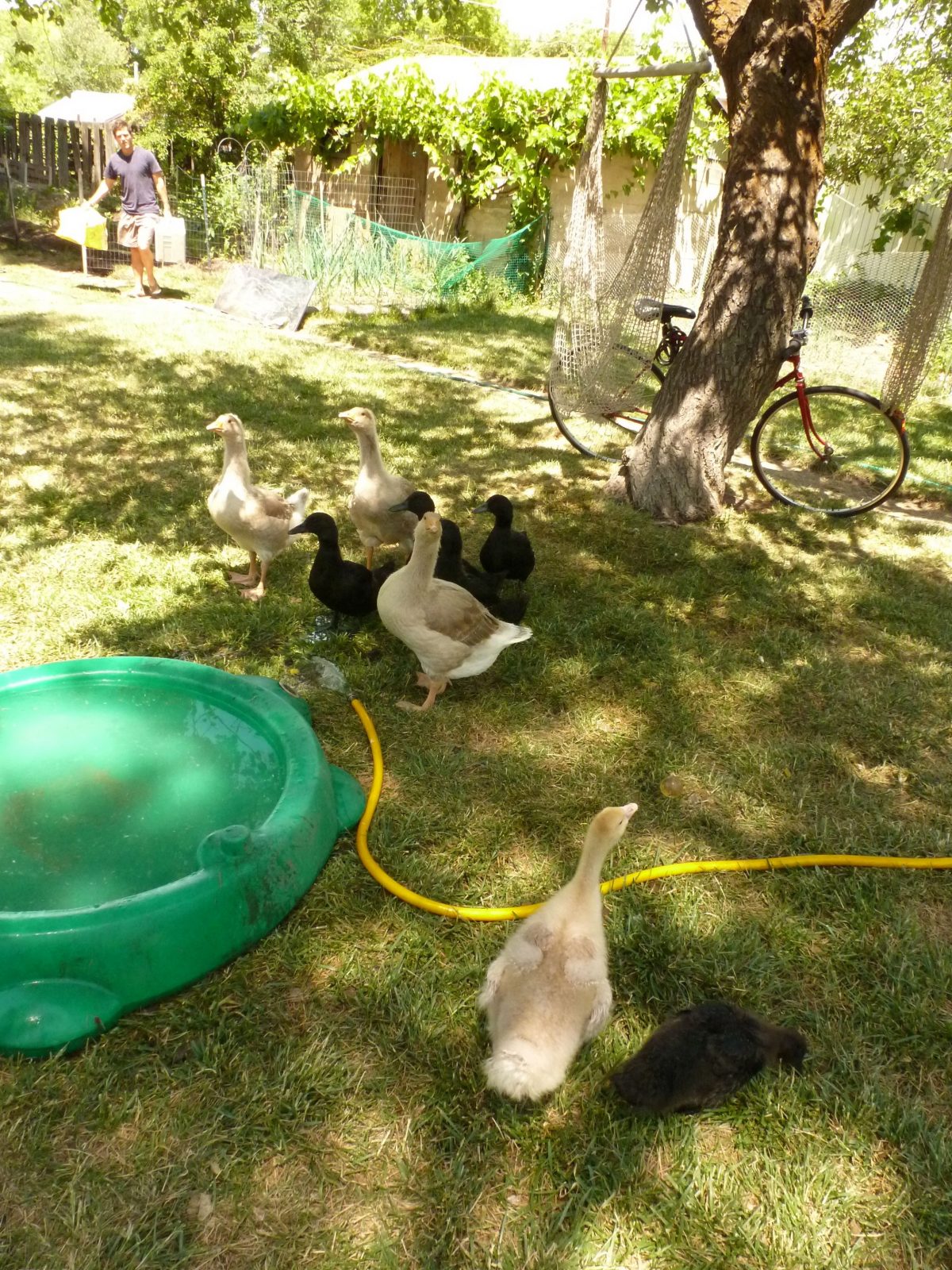 But in order to breed the ducks, we want to hold on to two or three females per male, which means that at this point we can only take one male. Then there is Cricket. How could we kill him? We should never have named him. But from the first day he arrived and took the flying leap from his mailing box, dropping three and a half feet to the ground, he had a name. We’re less attached to the other ducks. They’re particularly standoffish and none of them received names. They didn’t imprint on us, so we didn’t imprint on them. It’s a curious attachment, the parent to the animal, one likely based on Darwinian survival more than anything. The Protestor, while large, has always appealed to our preference for the underdog: it was clear from an early stage that he would be the most independent gosling in the flock.

The geese are even trickier. We could harvest one in the next few weeks as their feathers are also almost all in. But the literature says that most geese are harvested at their full size after six months, typically around Christmas. In the past couple of weeks it’s almost seemed as if they’ve stopped growing.

Ben and I double-checked on the average adult size of American Buff geese: a whopping 22 to 28 pounds! They clearly have a lot more growing to do. And with that size we definitely won’t have to worry about clipping flight wings to keep them in the yard.

The geese will find a mate for life. But we’ve read that they won’t really mate up permanently until the spring, when they start building their nest from straw, twigs and down feathers plucked from their own breasts. One book said that it may even take up to two years for the mating pair to establish permanently. Having such a small starting flock makes deciding the fate of these birds very difficult, especially with the end goal of hatching new flocks next spring. With only two possible pairs, do we have enough for a Christmas goose this year? And what if our favorite two, the Protester and the little Goose princess never hit it off? Of all the birds, the Protestor is the most aggressive towards Goose, his betrothed. The two birds better start hitting it off, or they’ll leave us little choice. I would hate to make them our holiday feast. It wouldn’t be very joyous. 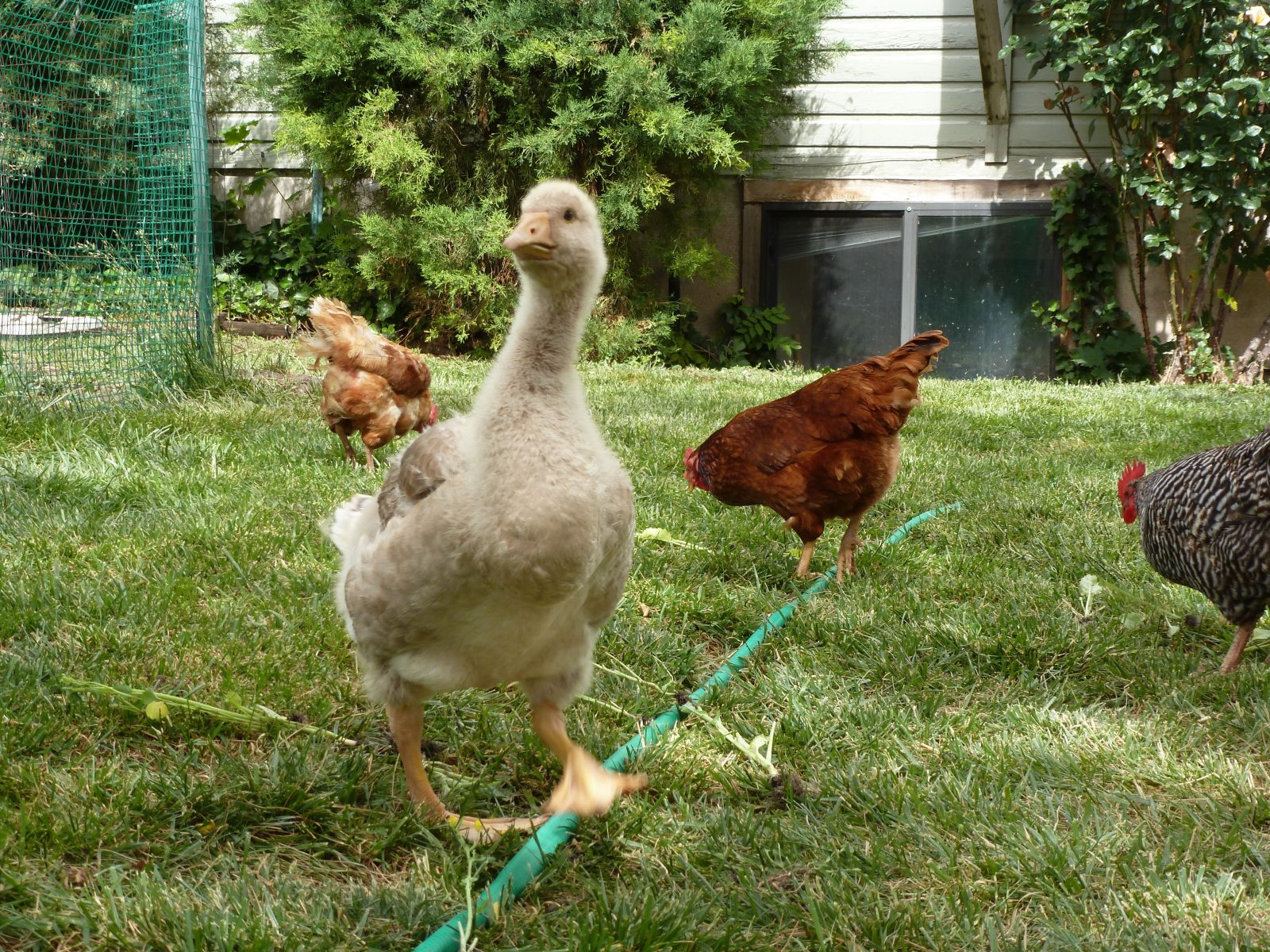 This article was originally published on June 5, 2012.