Reminiscences of the Sixties

And so my two hippy sisters moved in and before long three people were living in the dusty orange VW bus parked in the driveway, with four or five more curtained off in the basement. I learned one can never have too many dogs, and cats have feelings, too.

These were the beautiful people, strange and exotic in their looks and ways. I loved the men with long wavy hair, handlebar mustaches and flowered prairie shirts, looking so manly wearing seed beads, their leather fringed stash bags jangling with silver bells. And those dreamy earth mother women, cooking up a wheat germ storm in my kitchen, their clothes a never-ending surprise of ingenuity and velvet scraps. Like ancient crones they circled, hanging all manner of pouches from their belts and around their necks, each one holding a tool of their talents, scissors in the shape of swans, packets of needles, rolling papers, matches and weed in patterned tins. In circles they gathered stitching and beading long into the nights. Unadorned and Quaker-like, they patiently stitched elaborate patterns of myth and magic onto leather capes and down the legs of bell bottomed jeans hiding secret rainbow flares. All this by candle light, in air thick and sweet with clouds of frankincense and myrrh, and steaming cups of chamomile tea.

There was the music. Mesmerizing, blood-pounding beats, reaching deep. Like nothing I’d heard before. It was good—by Johnny Cash, and hello Mr. Bojangles. The musicians appeared like wizards and sorcerers of old, their sounds conjuring. I found the Beatles and their love love love. I became mesmerized by those lotus eaters, Cream, mind walkers every one. There were melodies of opiate visions, and time, untimed. I saw Gracie Slick, black and vamped, and I met the famed and fated Frank Zappa. I began to radiate with the philosophy of free love and I wore tinkling ankle bracelets. Had I discovered heaven on earth?

Without a glance back, I left my redneck bars and found the drug stores, their proprietors wearing velvet tails and paisley boots. I smoked pot and sipped hashish tea in fancy china cups. My hair grew wild and kinky and I made clothes from antique lace curtains. I wore black velvet for lunch and hats to breakfast. I soon became a legend in my own time and mind. I was a pacifist now, never missing a sit-in or a peace march, waving signs, Make Love. Not War. Tossing flowers, I marched alongside Country Joe and the Fish, white balloons tied to my wrists, wonderfully crushed between protesters and kerchiefed dogs, laughing children, who wouldn’t choose love?

At the heart beat: the concerts, the coup de gras of the beautiful people. They gathered, clad in dreams and other-world fantasies, clapping and spinning, stoned blind on drugs with names and the power to enslave. Women in long dresses of silk and lace, fur stoles and feather wraps. Men in top hats or buckskin, leather pants and knee-high boots. Theda Bara vamps, pale-faced and black-eyed, hooded capes and harem pants. Even natural women were beautiful, their hair loose, their legs unshaven. But under the lights of psychedelic wonder, everyone had deep space eyes.

Like a flashing light, my heart beat neon colors as I touched the hem of Buffalo Springfield’s robes. The seductive scent of marijuana and patchouli filled the air as we made circles, following some ancient rituals, knocking on doors that suddenly appeared.

And there I was, rushing through brilliant fields of flower children. Golden frisbees hovering above leaping dogs, flashing yellow kerchiefs. I splashed in streams of Orange Sunshine. And there was a harvest in my heart.

Mixed Media Artist Marcee Blackerby works from a home studio in Salt Lake City, UT, where she resides with her husband, Sculptor/ Artist Ric Blackerby. She has a Bachelor’s degree from the U of U.

“My boxes are stories with windows, and like Pandora’s, their secrets beg to be opened.” 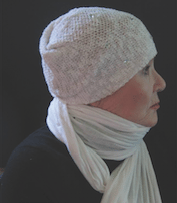 Marcee’s found object art goes from her intricate and detailed boxes to works using a variety of materials. “I feel that through my use of objects I can evoke a response from the viewer. I’m constantly looking for ways to examine the trappings of our lives, and select objects with memory or spark. I strive to bring about a visual connection and use icons that encourage dialogues of concepts of valued traditions.” Her work can be seen locally at the Tin Angel Cafe and Etsy.

This article was originally published on June 30, 2015.