Reconnecting with Sophia, the wisdom of the earth.
by Troy Williams 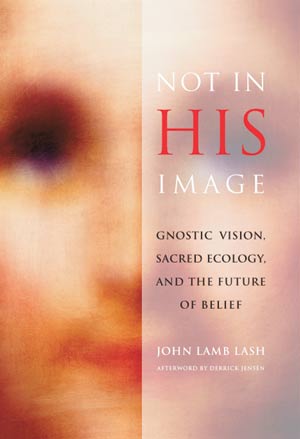 Is humanity itself endangered by our religious beliefs? When we look to religion to seek answers to global problems, is it possible that the religions themselves might actually be the source of our crisis? John Lamb Lash is a practicing mythologist and the author of "Not In His Image: Gnostic Vision, Deep Ecology and the Future of Belief." Lash explores the violent rise of Christianity and their campaign of genocide against the ancient Pagans. He further suggests that the Gnostic myth of the divine mother, woven together with contemporary deep ecology, might offer a course correction for the evolution of our species.

TW: You begin your work in 415 A.D, with the murder of a Pagan noblewoman outside the Great Library at Alexandria. Who was Hypathia?

JLL: Hypathia was the daughter of the head of the school of mathematics at the famous Alexandrian Library. She was a teacher, a scientist, a mystic and a writer. Hypathia was driving home in her chariot when she was confronted by a Christian mob and murdered in the street. Many historians believe that the murder of Hypathia represents the death and the end of the classical world and the entrance of Europe into the dark ages. Hypathia embodied the Pagan intellectual class of Europe in pre-Christian times. They were teachers, mystics, writers, artists and poets. Everything they represented was symbolically destroyed by her death.

TW: What were the Christians so threatened by?

JLL: It took three or four centuries for the ideology, belief and practices of the new religion to be defined-the belief system in a savior, the belief that an off-planet father will stand over the judgment of the world. The people who formulated Christianity did not enter into a friendly dialogue with the religions that existed in the ancient world. Rather than come to them in a spirit of generosity, they came to the Pagans with a spirit of hostility. Christianity rose to power primarily through events of violence, imposition, coercion and the destruction of any competition.

TW: Break down what you call the Redeemer Complex. Take us through that.

JLL: The first element is the belief in a father god (not a mother) who alone creates the world. That father god is an off-planet deity. He is not in the creation-the creation is his handiwork. The second element is a chosen people who reflect the awareness of the father god. Third, the messiah is sent by the father god to guide, drive or compel the chosen people to fulfill their destiny. The fourth point is the day of retribution, judgment and universal damnation for those who have not followed the divine plan. This whole package I call the "Palestinian Redeemer-Complex." It was formulated over many centuries in the Jewish religion, and then it passed into Christian ideology to survive today.

TW: We see the genocide of the Pagans, the destruction of the Mysteries, the Crusades, the Inquisition, the conquering of the New World-all justified by the cross.

LJJ: That may sound like a sweeping generalization. I'm not arguing that we can blame all of human violence on Christian ideology, but for something more subtle. Humans are capable of violence and oppression. When that tendency becomes legitimated by a grand religious belief system, then the violence takes on a superhuman dimension, going totally out of scale. That is the kind of violence we have seen associated with the Christian religion for 2,000 years now.

TW: And it provides a cover and justification for dominators and abusers to maim and kill. Take us through what you call the Victim-Perpetrator Syndrome.

JLL: For some 50 years in American psychology, we have developed the idea of the abuse bonding, or what I call the "victim-perpetrator syndrome." A bond forms between abusers and those they abuse, and some of the abused will become abusers in turn. Even the abused people in the system who do not become abusers will remain faithful and loyal to those who abused them. We see it in dysfunctional families where children who are beaten to an atrocious degree will stand up and defend their parents. I looked at the victim-perpetrator syndrome to analyze history and found that the ideology of Christian salvation is a pathological concept that serves as a cover for the victim-perpetrator game to continue.

TW: If perpetrators of abuse are more often than not abused themselves-what abuse was inflicted upon the Europeans prior to the first Century that produced for them this drive for domination through violence?

JLL: Go back and read the Old Testament. Read how Jehovah treats his chosen children.

TW: He's always threatening to wipe them out!

JLL: He punishes them, and then he promises to reward them more highly than any other nations. But that's only a lure to pull them deeper into the bonding. The next thing you know, they're being punished again and told they're not good enough. If you read the Old Testament with this victim-perpetrator syndrome as a key, it's a pretty eye-opening experience. Another, historical example is when the Europeans discovered America. They systematically perpetrated genocide on the Native Americans. Why did they do that when they could have acted otherwise and made alliances with those people? My answer is that the Europeans who came to the Americas in the 15th century had already been victims of genocide and violence through the imposition of Christianity. They were the abused who turned into the abusers.

TW: I attended an Earthdance downtown as a group of people gathered to pray for world peace. Two prayers struck me in particular. A member of the Northwest band of Shoshone stood up sang and spoke of a prophecy of our pending destruction-and then invoked "Jesus our Savior" and the need for deliverance. Then an African Christian minister gave a prayer and invoked Jesus again, praying for world peace. I was awe-struck. Here were two men, representing two cultures that have been utterly devastated by Christianity, and they are both invoking the deity of their oppressors to rescue them from the very oppression that the deity created in the first place!

JLL: It's a staggering insight. You couldn't ask for a clearer illustration of the victim-perpetrator bond than that. I'm sure they were totally sincere in their beliefs, but I would call them seriously deluded. They are essentially pleading with their perpetrators in a sense saying, we want to reconcile with you. But reconciliation only favors the perpetrator – and the game goes on.

TW: Let's segue into deep ecology and the myths of Sophia.

JLL: I believe the path of deep ecology is a way back to what we had before the rise of salvationist, patriarchal ideology. It's a way back to understanding the earth as a divine presence, regaining our connection with ecstasy and knowing the earth in a non-dual sense. That is, knowing that we are part of the cellular life and consciousness of the earth and that we are one with the wisdom of the planet without separation. I think deep ecology is the path taking us back to Sophia, the goddess of wisdom and to the Pagan Mysteries that were massacred by the rise of Christianity.

TW: You are talking about a total identification and immersion with nature as a life-force that can heal our psychic wounds.

JLL: Many people of the world have come to understand indigenous cultures and recognize in them something profound that we need. The indigenous wisdom of, say, the Inuits of Greenland and the aborigines of Australia is essentially the same. Indigenous wisdom offers two key factors that we need for both moral and physical survival. One of those is the ability to learn by direct contact with the wisdom of the natural world: learning from the earth, from the animals, from the trees and the sky. That means having the humility to learn and be taught that we are part of nature by the non-human part of nature.
The second key factor is rapture, ecstasy and the connection with the life force of the earth. We have lost that ecstasy and we have lost our ability to learn from the earth. But we didn't lose it from a natural process. It took 2,000 years to beat it out of us. This rapturous bond was violently ruptured. It's no surprise that we find the world today full of people taking anti-depressants. The one thing that can save us from the abyss of loneliness and depression is our connection with the divinity of the earth itself. I believe we are now at a threshold where these things can be understood, and we can recapture and recover what was so brutally destroyed.

TW: A key aspect of spiritual development and healing is the idea of ego-death and an expanded identification.

JLL: Ego death was the primary experience that people went through in the ancient Pagan religions called The Mysteries. The Mysteries were prevalent all over the ancient world, from the British Isles, all through Europe, Spain, France, Italy and around the Mediterranean Basin. There was a vast network of these so-called Mystery Schools. The founders and teachers of these Mysteries were called the Gnostics – "those who know as god knows." The primary act of the Mystery initiations was to let go of your sense of self momentarily. Your sense of ego, your sense of separation, and your identity dissolved so that you could participate in a greater sense of being. The concept of ego-death is something you may come by nowadays in Tibetan Buddhism and in other forms of Asian mysticism, where you learn that you must momentarily forget about yourself. You don't annihilate who you are-but you momentarily transcend the limits of your personal self to go into a sacred knowing. This is the path of initiation.

TW: We don't have the Mysteries anymore. Today we have The Secret and a lot of pop New Age ideas. How does one go about experiencing that reconnection with Sophia?
JLL: The first step toward recapturing the Mysteries of Sophia, whom the Pagans understood as the divinity and intelligence of the earth, is to learn about that ancient Pagan religion and to appreciate, understand and absorb it. I think this is a deeply personal and intimate process. Everyone makes the reconnection to Sophia in their own way. And as they do, groups of people will form. There will be a cellular organization, not a recreation of the Mystery Schools in a New Age sense – but a cellular rebirth through certain groups of people who share this passion for the Goddess Sophia and a passion for the earth.

TW: And we are seeing an increased awareness of global warming and a renewed passion for healing the planet?

JLL: Of course, but beware in mind the difference between deep ecology and ecology in general. Deep ecology asserts that the earth, the sky, the trees, animals, microbes and plants have an intrinsic sacred value apart from us and apart from their use for us. In ecology we think, let's take care of nature because we need nature in order to survive. That's a very healthy attitude, but it's not the spiritual attitude represented in deep ecology. I feel that deep ecology is more compatible with the view of ancient Mysteries. It's a spirit of humility. I would never say that we "save the planet." To me that's very arrogant. We're not going to save the planet. We're going to correct ourselves so that we can live with the planet-and the planet will heal us. The divinity of the earth feels for us. We have to correct ourselves so that we can become aligned with that greater life-force-Sophia. u

This article was originally published on February 1, 2008.