How the bloodroot plant eradicated my husband’s cancer when nothing else could.

It was a year ago in March that we got the news. My fit, 51-year-old husband was diagnosed with a rare form of cancer called sarcoma. A large tumor that had gone unnoticed for some time began to put pressure on Gary’s spine, and resulting diagnostics confirmed its presence. On March 12, 2004 a tumor the size of a cantaloupe was surgically removed from his abdominal region and ultimately diagnosed as a stage IV soft tissue sarcoma. In spite of his healthy lifestyle and low risk behaviors—he’s never smoked, rarely drinks and trains regularly to compete in triathalons—there it was, a very serious form of cancer with very little research or information available on its course and treatment.

Nothing is more frightening than being diagnosed with an aggressive, life-threatening illness. Nothing is easier than turning one’s care over to a specialized physician with years of education and training, even for someone such as Gary, an acupuncturist of 17 years, who has helped patients with other serious health problems. The vulnerability that comes from this traumatic news fosters a kind of hope and dependence on the “professional,” someone who has likely had a great deal of experience in dealing with our particular brand of illness. They seem to normalize the experience a bit. After all, they’ve dealt with a lot of similar cases and have even seen some success stories. It feels natural to extend a great deal of faith and belief in their capacity to help us.

Gary was fortunate to have a team of top-notch, conscientious doctors working on his behalf. We initially opted for a conventional program of treatment. In truth, standard methods of treatment for cancer rarely include options other than surgery, radiation and chemotherapy. These methods are not without their liabilities, but for many kinds of cancer, success rates are sizeable. In Gary’s case, because there has been so little research done on sarcoma, we were often operating in the dark. Most disheartening of all was the fact that sarcoma has no known markers to determine its presence in the body, and we were therefore unable to measure success rates with the protocols until the end of treatment.

After 24 radiation sessions and five harrowing chemotherapy hospitalizations, doctors determined there was still an active tumor in Gary’s body. He declined his doctor’s recommendation of a sixth round of chemotherapy and made an appointment with a surgeon to discuss the possibility of a second surgery.

Gary and I were grateful for the candid approach of his surgeon. He was straightforward and pulled no punches in detailing what would be required to remove the tumor, which was located in the gastric esophageal junction. A portion of Gary’s stomach and esophagus would need to be removed and reconstructive surgery would be required. Life might not be the same in terms of his ability to tolerate foods and he would likely experience chronic gastric difficulty. Even then, the doctor put the chances of a recurrence of the cancer at 75%.

We were speechless on the drive home. Both of us knew surgery was not even on the list of options. We have both known people who have suffered through one surgery after the next, trying to eradicate their cancer, with vital parts of their bodies cut out. Each surgery promises to be “the last one.” Too often, it doesn’t seem to happen this way. We knew that no matter what course the tumor might take, this kind of debilitating surgery was not on our list of alternatives. 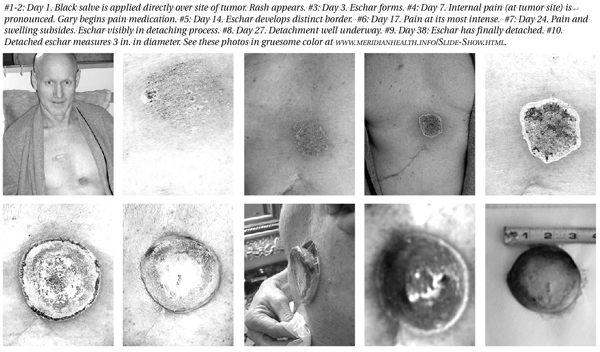 When we arrived home, a curious shift began to take place. We were out of options—at least options from the conventional Western medical model. Somehow, there was relief in this. We no longer felt the pressure of “doing the safe thing” by embracing modern medicine. We were left to our own devices, free to consider new possibilities with abandon. This phenomenon is sometimes referred to as “the golden handshake.” The traditional methods have now been exhausted; there is now permission to venture down new roads.

I got on the Internet that night and typed in the words cancer treatment alternatives. When I pushed the enter key, the tight space we were in began to open up. From that point on, life felt very different for both of us. An old statement came back to me then, pointing out that the fewer choices we feel we have, the greater our level of despair. I could never have predicted the many, many alternative options that were available for the treatment of cancer. I guess I had been socialized to believe that non-traditional health care for something as serious as cancer was most likely a form of quackery—desperate, last resort attempts to hang on to hope. The reality couldn’t have been more different.

We spent the next few months doing a great deal of research on a variety of treatment methods. We accessed research studies (yes, there is a great deal of research available on non-traditional medical practices), ordered books, and consulted with practitioners. But mostly, we explored our relationship with fear, and realized that cultivating fear really is a choice, and we don’t have to do it. Somehow, our fear seemed to diminish when we took the healing process into our own hands.

We decided on a number of treatment choices. Each one has been instrumental in Gary’s course of healing. But the most remarkable, and most dramatic, was the use of the black salve that comes from the plant known as Sanguinaria canadensis, or bloodroot.

I have come to have a great deal of reverence and respect for this most powerful of healing agents. Bloodroot, combined with several other ingredients, forms a salve that is known as an escharotic (es-ka-rah’-tik). I was surprised to discover that escharotics have a long history of use in the treatment of cancer, dating back to Hippocrates (who was known to use such substances), and ancient Egypt. In the last three centuries, many case studies using escharotics for cancer treatment have been documented, both in Europe and in the United States, by physicians such as Dr. Weldon Fell, Dr. John Pattison and Dr. Eli Jones.

An escharotic is defined as a caustic substance that creates a chemical reaction with various tissues in the body. The salve is applied topically in the region where the disease is believed to be present. It then absorbs through the skin, seeks out diseased tissue located internally, and destroys it. The incapacitated tissue is then brought to the skin’s surface and eventually sloughs off. If there is no disease present, the black salve will simply rest on the skin’s surface until it is wiped away. Healthy tissue seems to be bypassed in the process, other than tissue disturbance on the skin’s surface where the eschar (scab-like formation) breaks through. Remarkably, in spite of the potential for gaping holes in the skin, bleeding and infection are rare at the application site. However, there is usually considerable scar tissue.

It is almost impossible to move through the cancer experience (whether it’s you or a loved one) and not feel that, somehow, an initiation has taken place. Never is this more true than when using the black salve. It is often said that the black salve is not for the faint of heart. My husband got a firsthand experience with just how radical this treatment can be.

The action was simple enough. He applied the salve directly over the tumor site, on a daily basis, until the eschar seemed to be well formed. At this point he stopped the salve and just applied vaseline to the wound area so it wouldn’t dry out, continuing to dress it each day.

There was some soreness on the skin’s surface that became painful at times, but the most intense pain took place internally, at the tumor site. He describes the sharp pain as a “strong tug and a pulling.” He took strong pain medication for nearly three weeks during the 38-day process.

At the end of 38 days the eschar, which was three inches in diameter, a half inch thick and resembled a large mushroom sitting on his breastbone, detached. The wound closed up rather quickly, and the resulting scar shrunk down to two inches in diameter during the next six months. Gary’s next biopsy showed that there were no active cancer cells in that region. His other diagnostics indicated that there was no other cancer present in his body. After months of disheartening news, it was gratifying to hear the best news ever: Gary was cancer free.

There is an intense spiritual component to working with bloodroot. Ingrid Naiman, who wrote a comprehensive book on “Cancer Salves,” makes this statement: “People who are ready for an initiation of the spirit in which they surrender themselves to the purposes of their own souls, and to God, can be saved by this plant.”

Looking at bloodroot in its black salve form, it appears dark and heavy and has a deep, musky odor. From a metaphysical perspective, its healing properties reflect only high, vibrating energy. One school of thought proposes that the low-vibrating, fear-based cancer cell cannot tolerate the light and vibration of the bloodroot, and therefore perishes. There is also, of course, much in the way of scientific explanation that supports its function, but in the matter of healing it is almost impossible to separate the physical and the spiritual.

Walking the line between conventional and alternative worlds of medicine has its its challenges. It takes a fair amount of ego strength to weather the subtle, and sometimes not so subtle, messages from your doctor that modern medicine is the one and only avenue toward eradicating cancer. Granted, some of Gary’s physicians reported that cancer could surprise you sometimes with unpredictable outcomes, but that’s about as far as it went. Happy as they seemed to be when his diagnostics showed he was cancer-free, they did not show much interest in what alternative therapies he was pursuing. I remember times when, in his excitement, Gary attempted to explain the merits of the black salve to our doctors. I would watch the polite interest on a doctor’s face soon dissolve into boredom. A congratulatory pat on the back on their way out the door saved them from any additional explanations. Sometimes they’d even say, “Well, whatever works,” and move on to other matters.

Willingness to be unpopular with any number of people is an inevitable part of taking treatment options into one’s own hands. It is never easy to stand up to medical specialists (and in Gary’s case, excellent, compassionate ones) and say, “I’m going to pursue a different path.” But those who wish to be wise and proactive in following the course of treatment they feel is best run the risk of leaving some individuals frustrated with their decisions. A more substantial risk would be to wait until the body is ravaged by the effects of radiation, chemotherapy or disabling surgery before considering alternative therapies.

Lee Ann McConnell is a clinical social worker with a private practice in Salt Lake City. Visit her and her husband’s website at http://www.meridianhealth.info for more information on alternative treatment options for cancer.

This article was originally published on October 1, 2005.