The autumn fruit of the ancients.
—by Charlotte Bell

When I first moved into my house back in the 1980s, a main attraction—second only to its proximity to the 9th & 9th Market that once occupied the corner where Children’s Hour now stands—was the plethora of fruit trees and copious cultivated garden space in its very small back yard. The tiny property had two cherry trees (Bing cherries and pie cherries), a Golden Delicious apple tree, a Bartlett pear tree, an apricot tree and a Portuguese quince tree.

The pear, apple and quince trees remain. Of course, I’ve taken full advantage of the apple and pear trees over the years. But the quince? The large five-petaled blossoms were gorgeous. But what to do with a fuzzy, oddly shaped, hard-as-a-rock fruit that you can’t eat raw? As it turns out, quite a lot. 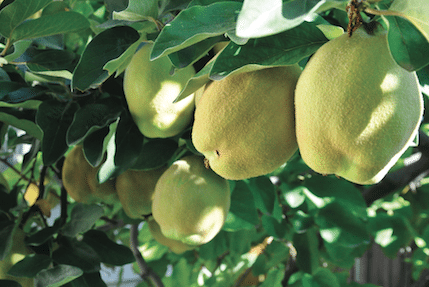 Quince is one of the oldest cultivated fruits on the planet. Its roots can be traced back to a mountainous region between the Caspian and Black seas, north of Iran and Turkey. It was cultivated in Mesopotamia (now Northern Iraq) around 100 BCE.*

Quince is mentioned in Greek writings from as early as 600 BCE for its use in rituals associated with wedding ceremonies. Quince was cultivated well before the apple, and some historians believe that the quince, rather than the apple, may be the fruit responsible for the fall of humanity according to the Bible.

Quince made its way across the Mediterranean and settled in Europe as early as 700 CE. It came to the United States in the 1600s. Quince trees were popular in the New England colonies in 17th and 18th centuries. But once the much sweeter apple arrived, quince lost its status. Apples were much easier to use and tasted great raw. Quince, on the other hand, is hard and astringent, not so great for eating off the tree. Almost all varieties have to be cooked.

For the first few years I lived in my house, my quince bounty ended up in the compost pile. Then I decided to start using it, but recipes were hard to come by. My edition of the classic tome, The Joy of Cooking, had only one recipe. There was no Google.

I first experimented with making quince butter using an apple butter recipe. I gave it to friends and family, who thoroughly enjoyed its unique taste. There’s really nothing like it.

In the past decade, quince has become much more fashionable. As of this writing, a Google search of quince recipes yields 878,000 results. While that might be small potatoes compared to other fruits and veggies, it definitely indicates a new appreciation for this homely ancient fruit.

Quince is one of those things like licorice or the Grateful Dead: People either love it, or they don’t. People are rarely neutral about it. This may be because its flavor is unfamiliar; and you do have to somewhat commit to enjoy it. You can’t just peel it, slice it and pop it into your mouth.

Peeling it is a bear. Slicing it requires a substantial knife and a fair amount of muscle. Fortunately jams, jellies, sauces and membrillo don’t require peeling. In fact, the peels and seeds contain a huge amount of pectin, so cooking quince with the skins and seeds intact means that you don’t have to add pectin to make it set; they also impart a rich orange color.

Over the years I’ve made a number of quince-based desserts: quince pie, quince crisp and baked quince with a cardamom yogurt sauce. Every year I make membrillo—the sweet, lemony South American quince paste you may see on the menu in finer restaurants. It’s heavenly when paired with Manchego cheese, and quite pricey to buy in gourmet shops. I’ve made jams and butters, both simple and spiced.

The easiet way I’ve found to cook quince was a discovery I made a few years ago—quince sauce. Cut up four or five large quinces and boil them in water with about four three-inch slices of unpeeled ginger. After about 45 minutes, put the mixture through a sieve or food mill. The result is a wonderful, fragrant sauce that you can use the same way you use applesauce. Its flavor, in my opinion, is much more interesting than that of applesauce. I found it to be delicious without any additional sweetener, but if you want to sweeten it, honey is a great complement.

So where can you get quince? I’ve seen them at Liberty Heights Fresh and Whole Foods in October and November. My yoga classes are a good place to get them, too. I bring bushels of them to my yoga classes, where my students snatch them up and later send me the recipes they’ve discovered.

Ever practical, quince will last in your refrigerator for up to four months. They also keep well at room temperature for a few weeks. A bowl of quince on your kitchen counter will perfume your entire house.

I like to think of quince as the ugly duckling of fruits. It doesn’t look like much, but with a little time, energy and patience, it transforms into a thing of beauty.

Charlotte Bell is a longtime CATALYST contributor and the author of several books pertaining to yoga and meditation.

*BCE (Before Common Era) and CE (Common Era) are gaining in popular use over BC (Before Christ) and AD (Anno Domini—In the Year of Our Lord).