Putting the well in wellness 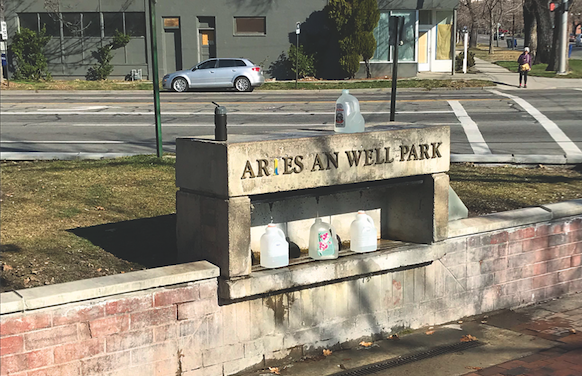 The Artesian Well Park has a past – and a future

On any given day in Salt Lake if you pass by a little park just one block north of Liberty Park you may notice people lined up with a mish mash of empty milk containers, five-gallon camping jugs, extra-large mason jars, and plain old reusable water bottles. With their containers at hand these locals are gathered at Artesian Well Park making use of three spigots that provide natural spring water free of charge. Many hundreds of fresh water springs bubble up around the Salt Lake valley. These days you’re most likely to come across one without really knowing what it is except that there will be a seep of wet filtering out of some green lawn and across a sidewalk like a broken sprinkler, except that there is no sprinkler. Since the time the pioneers first arrived these springs have been mapped and plotted, some brought cleanly to the surface with the help of just a little plumbing, but since the invention of indoor plumbing these springs, except for a rare handful like those at the Artesian Well Park, have mostly been forgotten.

At the corner of 500 East and 800 South, the Artesian Well Park is probably the best-known remaining example of this interesting local hydrological curiosity (there is also a free flowing artesian well that feeds the drinking fountain on Liberty Park’s southeast corner, but few who drink from it are aware that the fountain is spring water). Natural pressurization pipes these underground springs to the surface where they flow constantly. The artesian park well is thought to have been used by the pioneers. Since its initial discovery the well has received several updates: the faucets dispensing spring water were installed in 1979, in 1983 the area received paved walkways and landscaped spaces complete with trees and benches.

Although the underground spring is not part of the city’s regular water system, Public Utilities maintains the water at Artesian Well Park and monitors chemical levels. The spring water from the artesian well is tested weekly by the city to make sure its contents fit within the EPA Safe Drinking Water Act regulations.  Recent samples taken in 2018 have shown no fluoride, arsenic, lead, chlorine or pesticides. Levels of iron and uranium are higher than recommended by the Secondary Drinking Water Act, but not dangerously so.

Recent instances of dirty water, like those in Flint, Michigan, have raised concern for some regarding public accessibility to safe water and many people are turning up their noses to tap water altogether. Luckily, instead of reaching for a single-use plastic bottle—an item recycled only 20% of the time and that takes over 400 years to degrade—some people are turning to wells like these for a safe, reliable and free source of nonchlorinated, unflouridated drinking water.

Kenny Evon, an older man with rough edges and youthful cobalt eyes, has been coming to the 600 South artesian well for over 50 years.  Now a resident in central Utah, Evon drives almost two hours every month to stock up on the spring water rich in minerals. He chooses to use the water as an alternative to the tap water at his Nephi residence. “The water down there is a total freaking disaster, anything that comes out of the tap forms a pinkish residue around it. It tastes terrible,” he says, speaking in a gruff voice about water rights and chemical additives. It’s clear that Evon cares about where his water comes from.

One of the well’s more recent patrons, Jill, says when we meet that it’s her third day in a row coming to stock up on spring water for her family of seven. In her mission to avoid fluoridated water, Jill discovered the artesian wells as a reliable source.  “Fluoride is hard to get out of the water and the treatment systems that can do it are expensive,” she says. Removing fluoride from tap water can be accomplished with reverse osmosis systems, which push water through a semi-permeable membrane, leaving fluoride, lead and other contaminants behind. Other filtration systems include deionizers and bone char that similarly filter water to remove fluoride. These systems are effective but can range from $40 to $4,000. Distillation units also remove most of the fluoride in tap water, but can cost as much as $1,000.

While many people have issues with fluoride as a health concern, others drink the park’s spring water simply because they prefer the taste. Kim Olufeko, a soft-spoken but passionate resident of Central Salt Lake, started going to the Artesian Well Park a few years ago and now swears by its mineral-rich flavor. One Sugar House man, stopping to fill up a mélange of glass jars, says the water tastes better and “seems more natural.”

Dedicated fans use the naturally produced spring water mainly for drinking but also for watering plants, doing dishes, cooking, filling water reserves for camping, and even making beer. On the latter use Bob Evans, a former Salt Lake resident who used the well for many endeavors, puts it simply: “I went down there, I filled three five-gallon carboys with water and I went home and made beer.”

Despite its popularity, the well appears a relatively well-kept secret. Of the 14 people I spoke to, all had learned about it by word of mouth. Indeed, the well seems to hide in plain sight. Its paved walkways and brick encasement allow the hidden gem to blend in with the urban background. Often the only giveaway that the corner contains something special is the people with their assortment of jugs, bottles and cartons. That, however, could soon change. 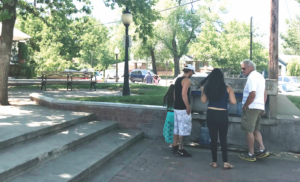 The Central City Neighborhood Council advocates for residents in the area and monitors the artesian well. Last summer, the organization worked closely with the city’s Community Development & Capital Improvement Programs Advisory Board on a grant that would allocate around $355,000 to give the park a facelift. Luke Garrott, former city councilman and a primary author of the grant, says he’s excited for the prospect of improving the spring and making it a more communal area. Park improvements include a more open concept with no concrete walls or brick barriers. The pipes pumping the water out will also get an upgrade: Planners are developing spigot designs that will allow more well-goers to collect water at the same time.

While Artesian Well Park is unique, the potential for additional public wells is larger than one might think. Many underground water sources have been paved over. Like the urban creeks that are being daylighted by the nonprofit Seven Canyons Trust, artesian wells could also be due for a resurgence. Executive Director and Founder of Seven Canyons Trust Brian Tonetti works mostly on uncovering and rehabilitating creeks around the Wasatch Range. He says neighborhoods could be sitting on buried springs without ever realizing. “When the pioneers came to the valley they might’ve seen a lot of really small creek channels or little springs that came out into wetlands or meadows. A lot of neighborhoods actually have these active springs, and a lot of them have been piped.”

Since underground springs are not a part of the city’s public drinking system, the city doesn’t map them out or keep track of where they are located. The tendency of ground water to move adds an extra layer of complexity. Many of these springs may also be on private land where the city has little jurisdiction and where negotiations over water rights can be complicated.

Regardless of the effort required to fully utilize spring water buried underground, the addition of artesian wells throughout the city could be a worthy task for the city. After all, Artesian Well Park is more than just a corner of concrete spitting out water from underground. For the people visiting the well, some since they were kids, it’s a source of nourishment and nostalgia. For the community it’s a source of camaraderie, health and sustainability.

Avrey Evans is a senior at the University of Utah majoring in Journalism and Gender Studies. She was CATALYST’s 2017 summer intern.