A new book offers guidance on using herbs to enter the conscious dream state.
-by Garrett Alberico
Once a dream did weave a shade
O'er my angel-guarded bed
'A Dream'
– William Blake

I love to sleep. It's one of four things that I can really do well. In fact, I wish I could sleep 12 hours a day and still, somehow, work in a two-hour nap sometime during my 12-hour waking day. This isn't always due to laziness, overall apathy or depression. I just love to sleep. And of course, if spoken a bit more succinctly, the reason I love to sleep is because I simply love to dream.

Ah, yes…dream world. The psyche's candy-shop. That inner Freudian flea-market of emotional, sometimes untouchable goods. It's a universal landscape-acknowledged by cultures the world over, yet hidden from view. Many cultures, in an effort to navigate that land, have turned to plant, animal and mycological allies to facilitate the process. 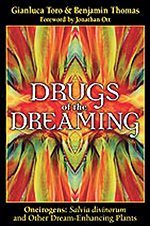 "Drugs of the Dreaming," by Gianluca Toro and Benjamin Thomas. July 2007: Park Street Press. www.ParkStPress.com or through local booksellers.

This is the premise of the newly published book, "Drugs of the Dreaming," the first comprehensive guide to oneirogens-naturally occurring substances that induce and enhance dreaming. The term "oneirogen," first coined in the 1970s, derives from Greek and literally means "that which produces dreams." Co-authors Gianluca Toro, an environmental chemist, and Benjamin Thomas, an independent researcher, detail the properties and actions of these dream allies, profiling ethnobotanical oneirogens such as Calea zacatechichi ("dream herb" or "leaf of the god"), Salvia divinorum, and a variety of other plants, primarily North and South American in origin, that are used in shamanic practices.

Toro and Thomas state that oneirogens produce the "main subjective effects observed in ordinary or conscious dream." Salvinorin A-the active chemical compound in Salvia divinorum (see "Rocketship to Somewhere Else"-CATALYST, December 2005, for further info on this beautifully bizarre entheogen from Mexico), ibogaine (from the African plant Tabernanthe iboga) and C. zacatechichi, native to Mexico and Central America, are all examples of oneirogens long used by native peoples to access the dream landscape.

Calea zacatechichi, considered the prototype of all oneirogens, is used particularly by the Chontal Indians of Oaxaca, Mexico for obtaining divinatory messages in the dream state. This "dream herb" is traditionally smoked or drunk as an infused tea. Typically, the tea is drunk slowly; the imbiber lies down in a quiet place and smokes one or two cigarettes made from the crushed leaves of the Calea plant. More leaves are usually then placed under a pillow before falling asleep.

The result of this practice is an oneirogenic entry into the landscape of lucid and rather vivid, sometimes significant, dreams. I followed this practice, as well as other methodologies (mainly extracts and tinctures) obtained from the vaults of Erowid.com and was truly amazed at the paths that opened.

Coupled with the side effects of mild euphoria and heightened waking clarity during the course of this experiment, I often experienced a mix of intense hypnagogic imagery-that special, motion-picture reel of images that the brain unloads between wakefulness and sleep.

In lucid dreaming, the dreamer  is not only fully aware of being in a dream state, but is able to move within that landscape-a conscious explorer, seeking out the dusty corners and hidden pathways that preside in our dreams.

The practice of lucid dreaming very much parallels meditation. It takes full concentration and the ability to let go of conscious thought, language in particular.

With the use of C. zacatechichi, S. divinorum, valerian, and the leaves of a mild sedative called kratom (Mitragyna speciosa), a tree native to southeast Asia, I was able to induce consistently vivid dreams. Though not fully lucid, they seemed consistent with  the experience of shamanic journeywork. Images and archetypes appeared and for the most part, I allowed them to sit as they were, rather than try to interpret or engage with them. I did, however, try to interact with certain images that felt particularly profound, but discovered that language consistently got in the way. I have not been able to fully let go and drop the ego from my dream states. I sense this will take many sessions to overcome.

The mechanisms by which these oneirogens facilitate lucid dreaming and provoke this intense imagery is still not known. Toro and Thomas agree that the available data on possible oneirogenic action mechanisms is scarce. While oneirogens have been used ceremonially for millennia, scientifically, they have been studied only since the 1970s-even less time than the still understudied classic entheogens such as peyote, mescaline, psilocybin and LSD. Oneirogens could possibly impact the human dream cycle by increasing the frequency or duration of rapid eye movement {REM) phases of sleep. REM is the recurring cycle in a night's sleep where dreams are typically produced and recorded. Another possibility is that oneirogens could simply improve one's ability to remember dreams.

In any area of scientific study that involves substances that alter ordinary states of consciousness, much of the data is anecdotal and gathered through seasoned 'psychonauts'-a term coined by Jonathan Ott, one of the godfathers of modern psychopharmacology. According to Ott, a psychonaut is "one who travels in the universe of the mind," which of course, includes not only those ingesting or smoking mind-altering substances, but devout practitioners of meditation or breathwork, as well.

Anyone interested in non-ordinary states of consciousness may want to consider entering into their own psychonautic experiences with oneirogens. Traditionally used herbs are readily available and sold through various websites-www.basementshaman.com is one that is particularly knowledgeable, ethical and comprehensive.

As always, when experimenting with any psychotropic substances: Care, knowledge and safety are paramount. Consult websites such as Erowid.com for an exhaustive list of dosages, preparations, trip reports and overall pharmacology of any substance capable of altering ordinary conscious states.

Garrett Alberico is a gardener living in Salt Lake and an occasional contributing writer to Catalyst. He sleeps at least 11 hours a day.