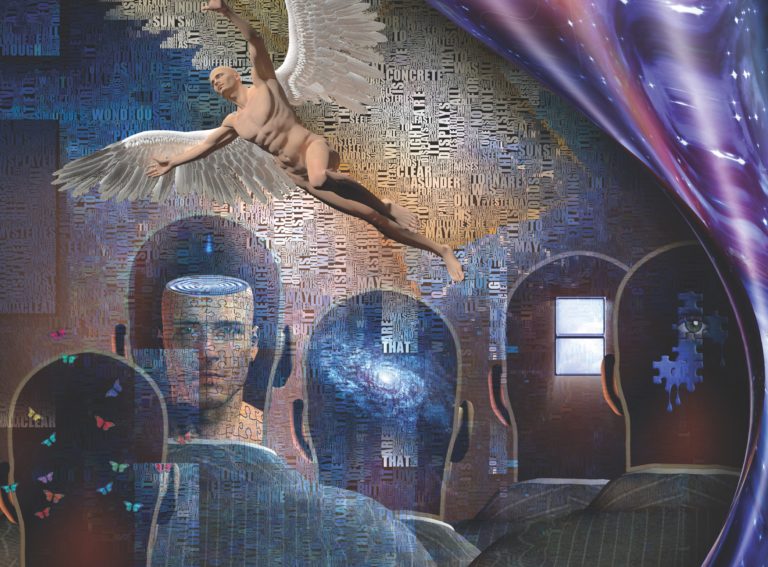 For many people, the word “psychedelics” still conjures images of rainbows, tie-dye and 1960s music festivals. But Michael Pollan’s latest book, How to Change Your Mind, tells a different story— about both the origins of modern American psychedelic use and its potential for healing.

Michael Pollan, the best-selling science writer and author of Cooked, The Omnivore’s Dilemma and The Botany of Desire, has taken a slightly different path on his most recent book, How To Change Your Mind: What the New Science of Psychedelics Teaches Us About Consciousness, Dying, Addiction, Depression and Transcendence (2018: Penguin). 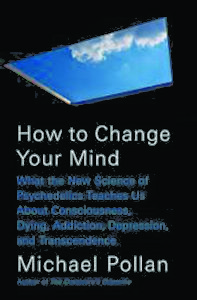 Many may consider the journey from plants and food to psychedelics a great divergence from his previous writing, but Pollan says his interest in food has always been an expression of a larger interest in our relationship with the natural world, and that every culture in the world, except one, uses plants to alter consciousness (the one exception being the Arctic-dwelling Innuits). Most of us have likely altered consciousness today with some plant—coffee, tea, alcohol, tobacco, sugar.

The decision to explore psychedelics was unusual for Pollan, as he referred to himself as a “reluctant psychonaut.” He missed the counterculture explosion of psychedelics in the 1960s; as he says, “The only way I could have gotten to Woodstock, at age 14, was if my mom drove me.” By the time he was a bit older, the thought of psychedelics frightened him, with images of bad trips, flashbacks and parables about the dangers of these drugs pervading the culture.

This prior inexperience with psychedelics actually makes Michael Pollan the perfect messenger to prompt this conversation within mainstream culture now. His brings a beautiful blend of openness, skepticism, curiosity, doubt and reverence as he explores the history of psychedelics and the more recent renaissance in research.

What magnetized Pollan to the world of psychedelics was hearing about studies taking place at Johns Hopkins and New York University involving the therapeutic use of psilocybin (the psychoactive ingredient in mushrooms) for cancer patients suffering from depression, anxiety and intense fear of death. 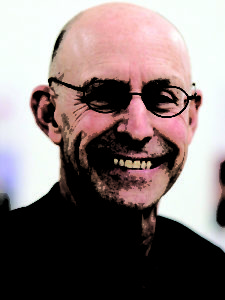 Pollan’s first reaction was surprise that people in pain, facing terminal diagnoses and suffering anxiety, would want to use psychedelics —wouldn’t that set up a bad trip? What he found when he interviewed the participants was just the opposite.

Many in the study reported the facilitated trip as being one of the most significant experiences in their lives, provoking insights that radically changed their lives well beyond the study.

One participant, a figure skating teacher in her 60s who had had ovarian cancer, was in remission. Despite being in remission, she suffered from a debilitating fear that the cancer would return. On her psilocybin journey, she discovered a dense, black mass under her diaphragm that she experienced as her fear. She yelled at the mass “Get the f@ck out of my body!” In her interview with Pollan, she said that she had completely extinguished all of her fear about the cancer returning, and that fear had been gone ever since. “I can’t control my cancer, but I can control my fear,” she reported.

In 2016, Michael Pollan wrote an article for the New Yorker, “The Trip Treatment,” based on his interviews with the participants in these studies, and exploring the new wave of research into therapeutic applications of psychedelics. Seeing the beneficial results, along with the recognition of the state of our mental health system, and the rise in suicide rates and depression, he wanted to go further down the rabbit hole and began to write How To Change Your Mind.

Pollan has always been an immersive writer,  taking his readers with him whether he is learning how to process a pig or build a house. In this book, he shares his insights, challenges and discoveries with the therapist-assisted use of LSD, psilocybin, ayahuasca and even 5-MeO-DMT (the smoked venom of the Sonoran desert toad). 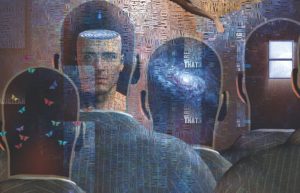 Along the way, Pollan provides a rich natural history of psychoactive substances in our recent culture—the early phases of research in the 1950s, followed by the decades when things went underground, as the substances were made illegal and funding for research was stopped; then into the “renaissance” of psychedelics starting in the 1990s, when researchers resumed looking at the potential therapeutic aspects of psychedelics for PTSD, depression, addiction, anxiety and other mental health conditions.

Swiss chemist Albert Hoffman accidentally discovered the psychedelic characteristics of lysergic acid diethylamide (LSD) in 1938. By the 1950s, more than 40,000 people had participated in research and over 1,000 clinical papers in the U.S. showed the benefits of LSD for depression, OCD, schizophrenia, autism and addiction. Bill Wilson, the founder of Alcoholics Anonymous, sought to make LSD a central piece of AA, as it was hailed as a wonder drug for alcohol addiction.

By the mid-1960s, however, all of that changed. LSD had gotten out of the lab and into the counterculture (indeed, helping to create the counterculture), and was declared illegal. A promising line of research in the field of mental health and addiction was abruptly stopped.

In the 1990s a small group of scientists, psychotherapists and psychonauts, mostly under the radar, began to revive some of the research that had begun in the 1950s. 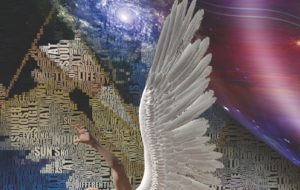 The therapeutic context is very different from a recreational experience—say, eating a few mushrooms on the way into a concert. There is great attention to “set and setting,” under the watchful eye of trained therapist guides. Pre-trip sessions clarify an intention, and sessions afterward help to process and integrate insights.

During the journey itself, the person is lying down, with eyeshades, listening to music. As there is great power of suggestion with psychedelics, the guide does not speak much, but is holding space and offering support for the person on the trip. Participants are offered “flight instructions” which are, essentially, to trust what is unfolding. If there is a door, open it. If there are stairs, climb them. If something is frightening, try not to run away, but ask it what it’s there for.

Throughout the book, Pollan quotes philosopher and psychologist William James’s account of mystical consciousness from The Varieties of Religious Experience (1902). “Mystical states seem to those who experience them to be also states of knowledge. They are illuminations, revelations full of significance and importance…As a rule they carry with them a curious sense of authority.”

That inner authority, or knowing something unmistakably from a deeper place, is a theme that is repeated in the stories in Pollan’s book and is part of what allows the discoveries from the journeys to lead to sustained changes in the lives of the participants—whether that be quitting smoking, working with PTSD, or some other challenge. Again, Pollan quotes James: “That deepened sense of the significance of a maxim or formula occasionally sweeps over one. ‘I’ve heard that said all my life,’ we exclaim, ‘but I never realized its full meaning until now.’”

In one Johns Hopkins study, researchers Roland Griffiths, Bob Jesse and Bill Richards were exploring whether psilocybin could elicit a transcendent mystical experience. “For me, the data [from those first sessions] were…I don’t want to use the word mind-blowing, but it was unprecedented, the kinds of things we were seeing there, in terms of the deep meaning and lasting spiritual significance of the effects,” says Griffiths. “As a scientific phenom­enon, if you can create a condition in which 70% of people will say they have had one of the most meaningful experiences of their lives…well, as a scientist, that’s just incredible.”

One study participant, John Hayes, a psychotherapist in his 50s, says he “felt like mysteries were being unveiled and yet it all felt familiar and more like I was being reminded of things I had already known. I had a sense of initiation into dimensions of existence most people never know exist.” Pollan writes, “Hayes particularly recommends the experience to people in middle age for whom, as Carl Jung suggested, experience of the numinous can help them negotiate the second half of their lives.” Hayes would not recommend it for young people.

Psychedelics and the brain

Throughout the book, Pollan frequently refers to the “default mode network,” or DMN. The DMN is a complex network of brain structures that tracks self-reflection, mental time travel, mental constructions and other functions. In looking at the brain images of participants on psychedelics, the activity in the DMN is significantly quieted. As Pollan says, “If the ego has a location, it is in the default mode network.” Interestingly, he notes, the FMRI images of participants on psilocybin are almost identical to those images taken of long-time meditators while practicing.

“Our sense of individuality and separateness hinges on a bounded self, and clear demarcation between subject and object. But all that may be a mental construction, a kind of illusion—just as the Buddhists have been trying to tell us,” Pollan writes. “The psychedelic experience of ‘non-duality’ suggests that consciousness survives the disappearance of the self, that it is not so indispensable as we—and it—like to think….The loss of a clear distinction between subject and object might help to explain another feature of the mystical experience: the fact that the insights it sponsors are felt to be objectively true—revealed truths rather than plain old insights.“

Some of the common experiences reported from the participant interviews, along with Pollan’s beautifully and hilariously written descriptions of his own journeys, also mirror what is described by the practitioners of traditional contemplative traditions. Often, the experiences are ineffable—experiences that can’t  be fully conveyed in words. Duality dissolves, along with a separate sense of self. A deep intimacy and connection—with oneself, other humans, with the natural world and with life itself—is a typical experience. So, too, is the sense of being resourced by something much more vast than one’s own personal history and—Pollan both recognizes the cliché and stands by the direct experience of his own insight—that we are, at our essence, love.

It is these kinds of experiences and insights that have led to significant results in the therapeutic realms, as Pollan refers to studies working with addictions, PTSD, depression, anxiety and other conditions.

A few graduate certification programs are already in place to prepare therapists for this emerging field. The California Institute of Integral Studies offers a program in Psychedelic-Assisted Therapy and Research, as does the Multidisciplinary Association for Psychedelic Studies (MAPS), which has done much in the way of research to pave the way. Utah has one certified graduate. Another has been accepted into the MAPS program for 2019.

Pollan points out that conditions exist where this work would not be appropriate. But overall, there have been minimal negative side-effects in the research gathered thus far. He says these journeys give a glimpse of another possibility, that can then be grown and integrated through nonpsychedelic practices such as meditation.

For psychonauts and neophytes alike, How To Change Your Mind is a great overview, taking psychedelics out of the terror zone to which they’ve been ascribed by history and shedding light on their true potential. At very least, this book is sure to change your mind about the nature—and future—of psychedelics.

Carl Rabke is a Feldenkrais and Structural Integration practitioner. He hosts the Embodiment Matters podcast with his wife, Erin.