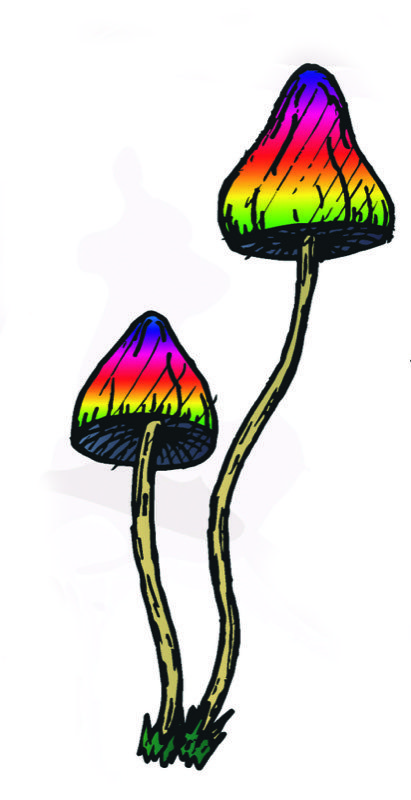 A good acquaintance of mine—his name’s not Matt, but he’s asked that his real name be withheld, so let’s call him Matt— was having a generally hard time with the pressures of modern American life. Matt has a good job, strong health, decent finances, and he and his loving wife have cultivated a life together that’s a little slice of country peace in the bustling heart of Salt Lake City. All in all, Matt’s life is good.

But for a while there, something just didn’t feel right. Something inside Matt felt off, like the second fiddle in his psychic orchestra was out of tune with the rest of the band. A steady dose of magic mushrooms, Matt says, have brought harmony back to his life.

For several months, Matt has been microdosing. Every fourth day, he consumes a minute amount of psychedelic mushrooms, usually three-tenths of a gram. It’s not enough to actually trip, but it’s just enough, he says, to salve his soul. Matt credits microdosing with numerous improvements in his life, including increased enthusiasm for his workaday office job and decreased anxiety related to the everyday demands and expectations of modern adult life.

Microdosing has been promoted since at least 2011 by Dr. James Fadiman, a Harvard- and Stanford-educated psychologist who has studied psychedelics for decades and who authored Psychedelic Explorer’s Guide: Safe, Therapeutic and Sacred Journeys (2011: Bear & Co.) He’s now running what basically amounts to a crowdsourced research project, and people like Matt have voluntarily signed on as unpaid guinea pigs. Fadiman suggests ingesting a very small amount of psychedelics—LSD, magic mushrooms, psychedelic “truffles,” iboga, or ayahuasca—every fourth day and asks that microdosers self-report any benefits or side effects they might experience.

The effects of microdosing, according to Fadiman, should be sub-perceptual: If things are glittering, or you’re seeing tracers, if you just can’t stop smiling, you’ve taken too much. However, that doesn’t mean it’s ineffectual. In an interview with self-improvement guru Tim Ferris, Fadiman said that microdosing is a kind of ”all-chakra enhancer, where everything’s just a little bit better.”

“People behave better, are happier, are more tolerant; not necessarily more creative, but more in the flow,” he told Ferris.

Based on the feedback he’s received, Fadiman lays out some suggestions for microdosers in a protocol he emails to participants, whom, he suggests shouldn’t attempt microdosing without previous experience using psychedelics. Following Fadiman’s advice, Matt takes 3/10ths of a gram of dry psilocybe mushrooms once every four days.

Speaking with CATALYST, Fadiman likened microdosing to “the intensely happy period that follows a [hallucinogenic] trip,” a period that purportedly lasts two days. He says the active ingredients of the psychedelic have been completely metabolized by the third day, meaning it’s something of a recovery day. On the fourth day, Matt begins the cycle once more with another microdose.

Matt says the day after his first microdose was extraordinarily productive. “I took a long drive to the desert of northwestern Utah to do some work,” Matt told CATALYST, “and on the drive home I outlined the first five or so chapters of a mystery novel, like, every detail. That just never happens to me. I mean, I think of myself as a creative person, but that kind of detailed story creation is not something I’ve ever been capable of.”

Since that time, Matt hasn’t experienced the same level of creative productivity, but he does think microdosing helps him chill out a bit. “I’m just generally less anxious, less angry, less jaded by everything,” he said.

Fadiman shared one report with CATALYST, from an anonymous 37-year-old Midwestern study participant who wrote that microdosing improved focus, empathy, sensitivity, honesty, and self-love, and also helped the person emerge from a dark hole after quitting prescription anti-depression medications. “I sleep without grinding my teeth, without tremors,” the respondent wrote. “I feel less ‘brain-fog.’ And I am more consciously aware of the emotions I am feeling and why. This allows me to deal with them more appropriately.”

Of course, the illegal nature of psychedelics makes it inherently difficult to conduct a study like Fadiman’s. His crowdsourcing method relies almost entirely on anonymous reports, which he only receives after asking people to break the law by obtaining and then regularly taking a Schedule 1 narcotic. Until he opens his books and his study to outside scrutiny it’s impossible to independently verify his findings and corroborate or refute the reported efficacy of microdosing. However, Fadiman says all he wants to do with his microdosing study is to lay groundwork for further scientific study. In that respect, he belongs to a long line of pioneering psychedelic researchers.

Richard Evan Schultes, perhaps the most important ethnobotanist of the 20th century, is credited with the scientific discovery of the hallucinogenic mushroom used by the Mazatec people of Oaxaca in nocturnal religious ceremonies. Traditional use of various species of psilocybe mushrooms in the region dates back at least to the Spanish Conquest in the early 16th century of what we now know as Mexico, and very likely even earlier. What Schultes could not have anticipated during his expedition to northeast Oaxaca in 1938 was that his discovery there—and his subsequent discovery of a morning glory plant with close chemical relation to LSD—would spark America’s indulgent psychedelic craze in the ’60s.

In his book Plants of the Gods, an exhaustive catalog of hallucinogenic plants used by traditional people around the world, Schultes notes how the use of hallucinogens in those cultures differs widely from their use in modern Western societies. The difference, he says, lay in their purpose and origin: “All aboriginal societies,” he writes, “have considered—and still do—that these plants are gifts of the gods, if not the gods themselves.”

Psychedelic use in America has typically been anything but religious, and for good reason: Our culture came to these plants not as spiritual gifts of the gods to be revered and thoughtfully consumed, but as scientific discoveries open to experimentation and free of cultural baggage.

Western understanding of these valuable plants has never been equal to their power, perhaps due in part to our young relationship with them. The relatively new term “entheogen,” with its connotations of the divine, seeks to reclaim the traditional origins and uses of hallucinogens noted by Schultes, thus setting them apart from other purely hedonistic drugs as uniquely valuable to human consciousness.

Schultes’ discoveries among the Mazatec may have sparked the psychedelic era in America, but it was one of his co-authors on Plants of the Gods who poured gas, or rather acid on the fire. Albert Hofmann not only isolated, identified, and named the active chemicals in the mushrooms Schultes collected, he also, of course, synthesized, ingested, and documented the effects of LSD. Fadiman credits Hofmann as the original microdoser and says the Swiss scientist microdosed for at least the last two decades of his life.

The effort to rebrand hallucinogens and other mind-expanding substances as entheogens appears to be a step toward normalizing the use of magic mushrooms, LSD and the like. Americans love their spirituality, and they love their gods, so why shouldn’t they love largely safe, non-addictive ways to access the divine?

Microdosing, which emphasizes the drugs’ medicinal benefits, could indeed be the giant leap.

The road to marijuana’s broadening legalization was first paved by promotions of its medicinal uses. Research of pot’s medical value has also been constrained by its USDA listing as a Schedule 1 narcotic, but that didn’t stop marijuana being recognized as a useful, acceptable, and legal treatment for a wide variety of ailments in 25 states plus the District of Columbia.

If Fadiman’s microdosing research plays out as he hopes, if it opens the doors for further scientific research into the healthful benefits of psychedelics as reported by microdosers around the country, then medical psychedelics may be the next domino to fall in the war on drugs. Microdosing would seem to be a use for psychedelics well suited to our modern workaday world and the sufferings it inflicts. And if it helps people be more focused at work and more concerned about the well-being of others, then the capitalist machine can keep humming merrily along.

However, neither Matt nor the Midwestern microdoser plan to wait for legalization of psychedelics to sweep the country. Both of them say they plan to continue microdosing for the foreseeable future for the good of their health.

Benjamin Bombard is a producer of RadioWest, a freelance journalist and an aficionado of turbulent weather.