Profile of a Goddess: Skadi, Goddess of Winter

Meet the fierce Norse goddess of winter.
by Carol Koleman 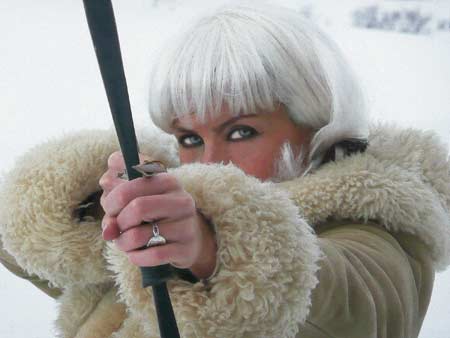 AKA: Sister of Wolves, Goddess of the Hunt, Ondergud (snowshoe goddess), Skathi, Skadhi, Shining Bride of the Gods

Story: Skadi's story begins with her father, the giant Thajzi who stole the Apples of Youth from the Vanir gods. The gods soon began to lose their strength and beauty, so they were desperate to get the apples back. Knowing that Thajzi would not return the apples willingly, they devised a plan. They set a trap by building a great fire near Thajzi's realm in Utgard, then retrieved the apples while Thajzi was away. As soon as Thajzi discovered the loss, he gave chase. Not realizing that he was being directed into the fire, he charged straight into the flames and was burned to death.

Very soon after this, Skadi appears on Asgard's snowy horizon, storming over the hilltop full of vengeance for her father's murder. This goddess cuts an imposing figure as she approaches-a giantess in full armor, seething with rage and challenging the Vanir gods for blood or compensation.

Rather than battle, the gods offer Skadi her choice of a god for her husband. She has her eye on one particularly striking god, so she agrees. The story continues with intriguing, if not perplexing, aspects involving a god's testicles tied to a live goat's horns for a laugh, a god line-up, and very clean, attractive feet. All this results in Skadi ending up with a different god than she had hoped for – not the stunning Baldur, but the sea god Njordh, who incidentally had very nice feet.

Njordh represented all that was in contrast to Skadi; while her dwelling was the dark, icy mountaintop of the north, his was the bright, warm ocean of the south. Nevertheless, they made a compromise by living in one another's domain, alternating nine days in one with nine days in the other.

Very soon, however, it was apparent that neither could endure an atmosphere so different from their own. Njordh could not sleep from all the howling of the wolves, and Skadi was driven to distraction by the screaming of the sea gulls. So, clean feet aside, they agreed to go their separate ways. Skadi, giantess goddess of the north-strong, fierce and independent-may still be seen roaming the winter woods with hunting bow in hand and sister wolves at her side.

Interpretation & Meditation: Like most goddesses, Skadi is a complexity of forces. Just as winter is unrelenting and powerful yet filled with humor and subtle nurturing, so is she. Skadi reminds us that we must go through a period of stasis in order for rejuvenation to occur. We need winter in our soul, a pause in our progression before we rush back in to the surging stream of springtime growth.

Skadi always finds a way to provide in the wake of her devastation. As goddess of the hunt, she teaches hunters to use the bow. She provides and nurtures in a no-nonsense style. She doesn't hand out sustenance on a silver platter; rather she gives us the tools to provide for ourselves. Don't mope around complaining about the cold and the lack of things growing. Sustenance is all around you if you are willing to work for it. What may seem dead today is only waiting to burst into full bloom.

What does winter symbolize for you – death, the hunt, life? Don't stop at accepting this as a mere story; go beneath the words as you would go beneath the frozen earth to find a root to eat. Dig up your truth.

We may try to fight the nature of winter; huddle inside our warm homes and avert our gaze from what is outside, but it is there we must venture to experience Skadi's wisdom.  In the freezing winter, we become fierce through sheer survival of it, fierce enough to storm over the icy mountains and claim our life just as Skadi did.

Here is your challenge: Go out to the snowy mountains alone, without another soul in sight (don't get lost and wear warm boots). Focus on the blood surging through your veins to counteract the icy chill, fill your lungs and feel them warm the freezing air before you exhale. Notice the cold seeping into your bones. Go on, suffer a little; some of our greatest teachers tell us that enlightenment comes through suffering. Consider this while chilling your bones in the snowy hills; death is nearby if you stay too long. Allow its icy breath to caress your warm cheek.

Bring yourself to the point of discomfort before you return to the safety of the fire. Stop for a moment and savor this life, this possible death. What do you find in this very moment? Like bubbles in liquid, what matters most will rise to the surface in the moment of suffering. Prepare yourself to be surprised. For what you thought was crucial in your life you may leave behind in the snow, and what you might never have considered before may lead you back to your incredible heart.

Music: Wake Skadi by Hagalaz' Runedance may be heard on YouTube u

Questions for the Goddess? Email: Koleman@earthlink.net.

This article was originally published on February 1, 2008.