Profile of a Goddess: Maat

Your heart's truth balanced against a feather.
by Carol Koleman 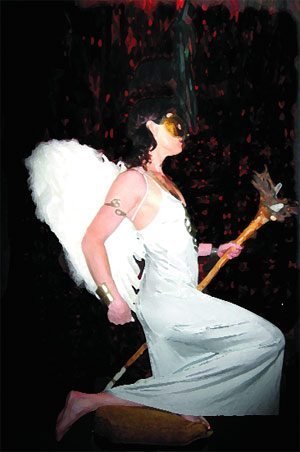 Form: Depicted as a winged young woman wearing a feather headdress (at times an ostrich feather takes place of her head), she often holds an ankh in one hand and a sceptre in the other and stands on a stone platform. Represented in hieroglyphics as a feather.

History: Our story takes place in the Hall of Two Truths where the souls of the dead must pass. Maat stands, arms and wings outstretched, near Anubis who overseas the weighing of the deceased's heart (the heart representing the seat of the soul and its weight deciding its fate). God Thoth also stands by to record the results, as well as the lion-like demon Ammit, who waits to devour the unworthy heart. Maat holds an ankh, the symbol of eternal life for those who will continue their journey. She waits benevolently, as she is not the judge of souls but solely truth. Anubis, sitting before the scales, places Maat's feather on one side and the deceased's heart on the other. If the deceased has followed the seven principles of Maat – truth, justice, harmony, balance, order, reciprocity and propriety, his heart will weigh equal to the feather. He will become one with Maat (truth), and his soul will live eternally in Aaru. But if he has not followed these principles, the weight of his heart will tip the scales. Ammit will devour his heart and the deceased will die his final death. The procession continues as each soul passes through the Hall of Two Truths.

Interpretation: The ancient Egyptians believed everything in the universe worked in a pattern, that all was ordered and rational. Maat, meaning truth, was the basis for universal balance; it was what made the sun rise and water flow, it was what punished the sinner and rewarded the worthy. Internally and externally, perfect balance is achieved through truth. If the soul is ordered and just, it will balance with the universe and therefore be one with Maat. Without Maat, there is only chaos.

{quotes align=right}Incredible, that something as light as a feather holds the weight of the universe.{/quotes} Each soul that passes through Maat's Hall of Two Truths (Aren't the only two truths eternal life or final death?) acknowledges by the weight of his heart whether he has lived by Maat's principles.

Egyptian Books of the Dead contain 42 concepts for balanced living. These concepts were tailored to each individual's interpretation of Maat, varying from person to person. They show the ways in which the soul may achieve balance, therefore completing universal balance. Here are a few examples of how these concepts addressed both spiritual and physical order:

But let's be realistic, these concepts could not have always been followed. Most likely they were hoped-for qualities that each writer felt would bring him closer to Maat, or maybe they were written in hopes of absolution. Some concern internal truths (I am not unkind to any being), some external order  (I do not keep a messy house).  Perhaps we should write down our own 42 declarations- positive rather than negative statements – for example, "I am peaceful" rather than "I am not violent" – reflecting aspects we aspire to be, a list of (future) truths that promote a balanced life alongside a balanced universe.

{quotes}Sometimes we have to say the words even if they aren't yet so, for by expressing these words, these desired qualities, we take the first step toward truth.{/quotes} After all, words in themselves are order; they work in a rational pattern just like a balanced universe. Once letters are organized to create a word, the word exists.  In this respect, words are truth. If you write them, you will do them and they become Maat.

Do you want to become a 'beloved of Maat'?' For your meditation, obtain a feather and focus on it as representing Maat and truth. Hold it as you imagine yourself to be the deceased, armed with your list of 42. Remember that you need both spiritual and physical balance; make your list reflect both aspects. Visualize that you are standing before Maat with these truths and then place your heart on the scale. Does it weigh up? If not, get working on balancing with truth before Ammut comes after you. And clean your house.

The Seven Principles of Maat