Profile of a God: Kokopelli 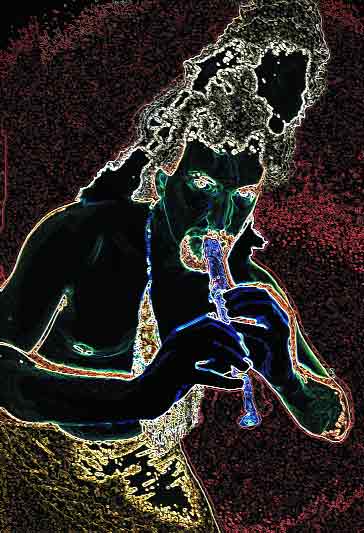 Name(s): Kokopelli, Kookopölö-the Robber Fly Kachina, the trickster
Born: 750-1000 A.D.
Religion: Associated with Hopi, Pueblo, Anasazi and Zuni cultures and spiritual traditions
Interests: Fertility, agriculture, music
Form: Kokopelli is often depicted as a mystical humpbacked, sticklike fluteplayer. Typically wears a headdress made of feathers.
History: The image of Kokopelli has become ubiquitous in modern North American culture. The most common image of Kokopelli today is that of the sticklike, arch-backed fluteplayer with mythical, melodious supernatural powers to manifest abundance and conjure the imagination. This safe version of Kokopelli lacks the exposed genitals typically found in pre-Anglo examples;  the classic depiction  of the Hopi kachina with a humped back  has an erect phallus in addition to the flute. This portrayal of Kokopelli is perhaps more accurate in symbolizing fertility, the primary role of this god in Hopi culture.

In traditional Hopi culture, Kookopölö, the Robber Fly Kachina, and Maahu, the cicada, gave rise to the modern story of Kokopelli. Robber flies belong to a family of blood-sucking insects, highly aggressive predators, equipped with a poisonous beak used on the other insects upon which they  prey. Robber flies have a very pronounced hump, which explains the hump-backed imagery contained in the numerous pictographs and petroglyphs of Kookopölö in the Four Corners region of the American Southwest. The overt mating behavior of robber flies aligns with the often sexually explicit behavior Kookopölö manifests in pre-Anglo Hopi culture. Kookopölö and his female counterpart Kokopölmana were often depicted with Kookopölö's tail hooked to Kokopölmana, the robber fly's method of copulating. Infertile Hopi women often prayed to this symbol of life force and fertility.

Maahu,  the cicada (often confused with locust), is second only to the spider in its cultural significance to the Hopi. The misinterpretation of Maahu as locust was well-established by the time of initial Hopi-Anglo contact.  Locusts gather into migrating swarms that can cause heavy damage to agricultural crops. Cicadas are harmless winged insects, also known as harvest flies, and are among the largest plant-sucking insects. Much evidence exists that the  the Hopi supplemented their dietary needs with cicadas, especially during the summer months. It is extremely unlikely that the Hopi would have regarded the harmful locust as highly as they did the beneficial cicada.

The true origins of Kokopelli as the fluteplayer most likely come from the loud buzzing and whistling sounds  the male cicada uses to attract females. The sound of the singing Maahu is similar to that produced by a Hopi flute, thus the Hopi belief that the Maahu are fluteplayers. Hopi legend tells of their entrance into this fourth world where they were met by an eagle that shot an arrow into two insects that held the power of heat (cicadas). The insects immediately began playing beautiful music on their flutes and healed their pierced and wounded bodies. Then the Hopi began their migrations, and the Maahu scattered seeds of fruits and vegetables on the barren land to provide abundant food and nourishment for the Hopi people as they began their new life in this world. This explains the prominence of Kookopölö -now known as Kokopelli-in Hopi culture.

Interpretation: Stories of Kokopelli, and their origin in Kookopölö and Maahu, teach us about manifesting abundance in our lives and nurturing our own imaginations. Spring is the perfect season to harness the energies of Kookopölö and Maahu. The image of Kokopelli, whether he actually took insect, human, or some other form, is less important then the universal appeal of  the hump-backed flute player.  We can learn from Kookopölö's aggressive nature that the only way to manifest abundance in our own lives is by creating opportunities for abundance and moving toward them with confidence and purpose, reclaiming our own inner power. The Maahu teaches us that it is possible to live with abundance and be plentiful in number without destroying that which we need to survive – the Earth. The locust, so often confused with the cicada (the true Maahu), also teaches us that creating abundance without harmony with all life on Earth is self-destructive and will ultimately lead to one's own demise. Finally, Kokopelli's flute had seemingly magical powers to bring forth life, evoke the imagination and bring harmony and peace to all life. But surely, the flute is simply the instrument used to bring forth our lives, our dreams and harmony with everything in this world. Use the image of Kokopelli to inspire and enliven your own life, and with the wisdom of Kokopelli, create the life of peace, harmony, and abundance that you deserve.

Tony Guay is a consultant to the U.S. Forest Service.  On his own time, he enjoys his family and spending time outdoors.  Tony may be reached at: tpguay@hotmail.com.

Visit iTunes and do a search on "The Indian Kokopelli Flute Vol. 1" for an excellent example of traditional southwest Indian flute music.